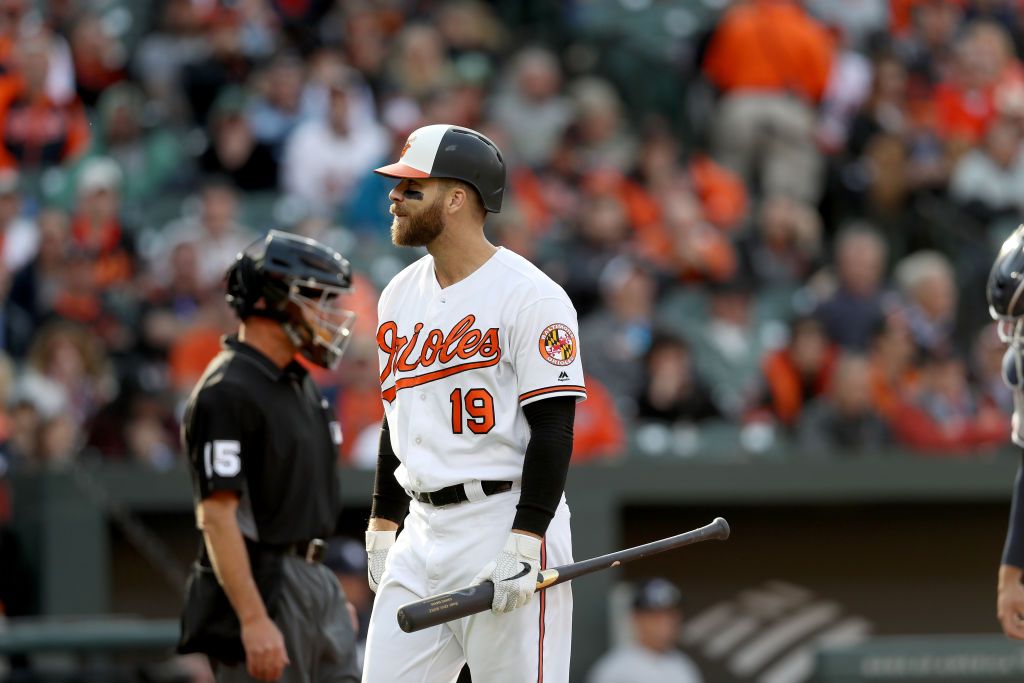 Facebook
Twitter
Google+
Pinterest
WhatsApp
BALTIMORE (WJZ) — The Orioles are off to a better start than most fans likely expected, sitting at 4-3 and winners of their first two series. The good vibes have not extended to beleaguered first baseman Chris Davis, however, as he has picked up right where he left off following last year’s historically woeful season.

Through his first 17 official at-bats, Davis — who (need you be reminded) signed in January 2016 what’s been for many a cringeworthy $161 million (guaranteed) contract — has struck out 11 times while failing to record a hit. He has recorded four walks, so his current triple slash line is .000/.190/.190. When you combine this current 0-for-17 streak with last year’s season-ending 0-for-18 run, Davis hasn’t recorded a hit since September 14th of last season when he hit a double off of White Sox pitcher James Shields.

Just when you thought Davis’ issues couldn’t get any worse, it turns out the one-time slugger is just a few games away from potentially setting another Major League low. His 0-for-35 streak dating back to last season leaves him just 11 outs away from tying the worst slump in MLB history. Former San Francisco Giants infielder Eugenio Velez went 46 straight at bats without a hit bridging the 2010 and 2011 seasons.

After striking out three times in the team’s home opener on Thursday, an 8-4 loss to the Yankees, the boos rained down on Davis from the fans in attendance at Camden Yards. The reception from the home fans surprised the slugger.

“It’s not something I was really expecting,” Davis told reporters after the game. “It was tough. At the same time, I heard it a lot last year, and rightfully so. I’ve said it before, I’ll say it again: I understand the frustration. Nobody’s more frustrated than I am. Especially a day like today, the kind of game we were having, really kind of had them on their heels the whole game. It was a frustrating game for me personally.”

Coming off a season in which he finished with the worst batting average in MLB history for a player eligible for the batting title (.168), Davis entered this year hoping to turn things around. The history wasn’t exactly on his side, but Orioles fans were certainly rooting for him to break out of his extended slump. Now, they’re just hoping for a hit before he reaches another infamous MLB mark.