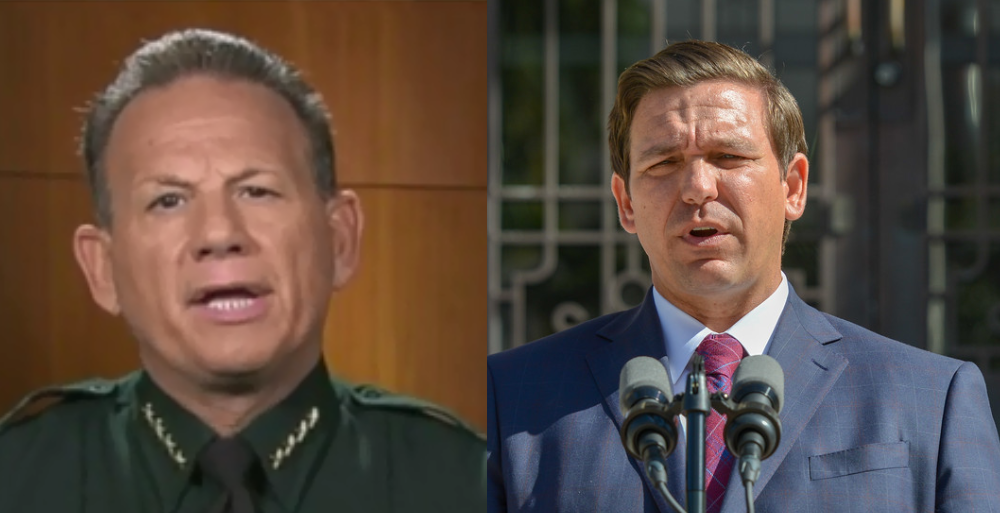 Suspended Broward Sheriff Scott Israel’s attorneys filed an appeal Friday of a judge’s ruling that Gov. Ron DeSantis had the legal authority to remove him from office earlier this year.

Hours later, the governor blasted Israel — and said he’s so confident of his stand on removing Israel that he wants the case to go to the state Supreme Court right away, bypassing the appellate court.

“Scott Israel continues to live in denial,” DeSantis said in a statement issued Friday. “The court has recognized my authority as governor to suspend him for neglect of duty and incompetence and this appeal is just his latest delay tactic.”

Israel’s four-sentence notice of appeal, filed Friday morning, doesn’t specify grounds for the appeal. It simply states that Israel is appealing and attaches a copy of Haimes’ order.

Israel’s attorneys, Ben Kuehne and Stuart Kaplan, outlined their argument in a statement. “The constitutional question involving the governor’s political use of the limited suspension power is so very important that it should be resolved by Florida’s appellate courts,” they said. “This is not merely an issue for Sheriff Israel, whose removal resulted from the governor’s election campaign political deal-making. It also represents an unprecedented use of the suspension power to disenfranchise the voters, who alone hold the authority to determine their elected officials.”

One result of the appeal is delaying action in the Florida Senate, where the annual legislative session is scheduled to adjourn May 3. The Senate, which must vote on DeSantis’ suspension, has halted any action until court challenges by Israel are completed. In a memo to senators Thursday afternoon, Senate President Bill Galvano reminded them that “the matter is in abeyance until all appeals are exhausted or have been definitively taken off the table.”

DeSantis cited the timetable in a filing with the Fourth District Court of Appeal asking for expedited consideration to move the case to the state Supreme Court. DeSantis said he wants “a final ruling so that the Senate can resume the process of formally removing him.”

A delay, DeSantis’ filing states “limits the Florida Senate from carrying out constitutionally prescribed responsibility in the suspension and removal process.” It calls for a resolution by the Florida Supreme Court “sooner, rather than later.”

Israel came under criticism after the February 2018 mass shooting at Marjory Stoneman Douglas High School in Parkland. In suspending him, DeSantis said lessons that should have been learned from the 2017 shooting at Fort Lauderdale-Hollywood International Airport never were implemented, leading to a disorganized response in Parkland that cost lives and eroded trust in the Broward Sheriff’s Office.

Israel wanted Haimes to declare that DeSantis had overstepped his authority.

With the judge’s decision, Israel’s most likely hope of returning to office before 2020 rests with the Republican-led Florida Senate, which can overturn or affirm the Repuplican governor’s decision. Otherwise, Israel said he’ll leave it up to the county’s voters by running for re-election.

On Thursday, Kuehne said an appeal was coming.

“As far as a definite commitment, that will depend on our final evaluation. But that is being done quickly because we believe this matter is an appropriate constitutional issue that should be expedited.”

Kuehne said the governor’s “overreach of the limited suspension authority has never before been used to replace a political opponent at the urging of the National Rifle Association.”

DeSantis lawyer Nicholas Primrose argued in court Monday that the governor has the authority to remove an elected official for “neglect of duty and incompetence.” He said Israel “failed to have an appropriate command staff procedure” and that he displayed a “lack of leadership in developing clear instructions and objectives.”

“I am pleased that the court recognizes my authority as governor to suspend a public official for reasons of neglect of duty and incompetence,” DeSantis said in a news release Thursday. “Broward County deserves professional law enforcement leadership that will safeguard the best interests of the community and work diligently for the protection of life.”

Rome riots over Covid curfew as police pelted with fireworks in...