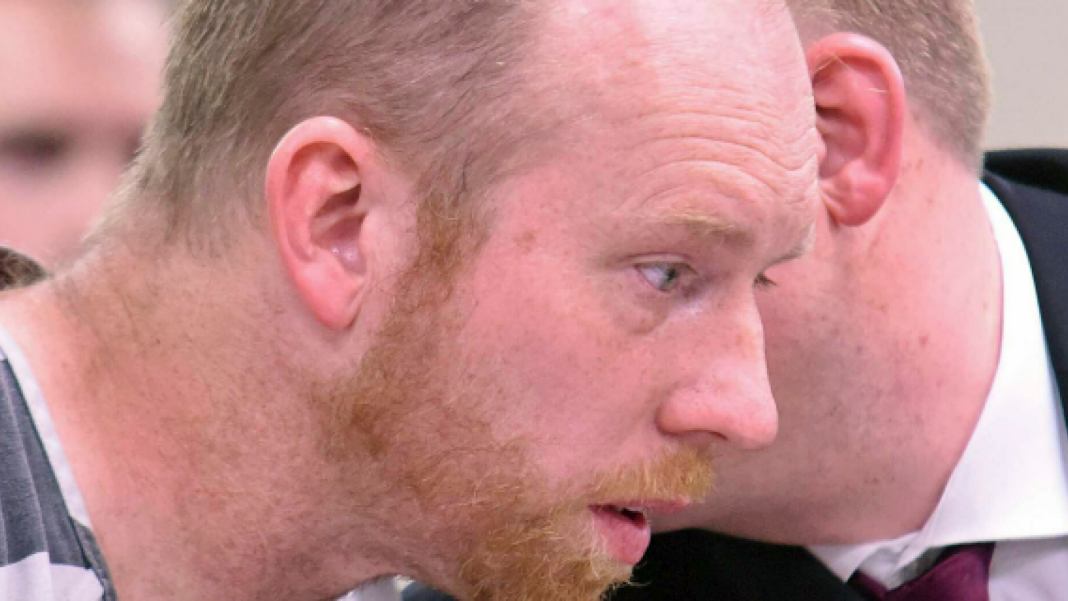 Chad Isaak listens to counsel in district court while being charged with four counts of class AA felony murder in district court on Friday, April 5, 2019, in Mandan, N.D. Isaak was arrested in Washburn on Thursday and charged with murdering four people in Mandan on Monday. He is being held on one million dollars bail. (Tom Stromme/The Bismarck Tribune via AP)

MANDAN, N.D. – A North Dakota man charged Friday with killing four people at a business that manages the mobile home park where he lives tried to avoid detection by picking up shell casings, changing his clothing, and cleaning a knife and gun with bleach, according to court documents.

Court documents allege that after shooting and stabbing the victims, Chad Isaak, 44, took one of the company’s vehicles to drive about one block, then walked to his own truck parked less than a mile (1.6 kilometers) away at a McDonald’s. Authorities traced his steps with help from surveillance video at businesses along the route, the documents say.

The affidavit and complaint filed Friday offer the most details yet on a mystery that has gripped the area since authorities found the bodies of four people Monday morning at RJR Maintenance and Management in Mandan, a town of 22,000 near the state capital of Bismarck.

A judge set bond for Isaak at $1 million after a hearing where Morton County Assistant State’s Attorney Gabrielle Goter argued that the killings “show a level of preplanning and a level of intent to disguise his actions” that suggested that witnesses and others could be at risk if he is freed.

“It appears that RJR was targeted,” said Goter, although court documents do not reveal a motive.

The police affidavit portrays a grisly crime scene in which the Cobbs and Fuehrer were shot and stabbed several times. Fakler had multiple lacerations and stab wounds, and first responders tried in vain to resuscitate him. Fuehrer and the Cobbs were all dead when officers arrived. Lois Cobb’s death was attributed to a cut of her neck, though she also had been shot, according to the affidavit.

Surveillance video shows the assailant entering RJR wearing brightly colored clothing, then leaving in dark clothing about 15 minutes later, the documents say. An employee at the McDonald’s told police that she saw a man wearing a camouflage ski mask, dark pants and dark shoes get into a white Ford F-150 that morning.

Police later linked the vehicle to Isaak, who lives in the small town of Washburn, about 35 miles north (56 kilometers) of Mandan. At his home, they found clothing matching what they had seen on video, nine spent shell casings, a knife with a bent tip, and gun parts in a kitchen freezer. The clothing, knife and gun parts all smelled of chlorine bleach, court documents say.

RJR began managing the mobile home park after Rolf Eggers bought the property last fall. Eggers, a Bismarck resident who spends his winters in Florida, said he never met Isaak and that Fakler never mentioned any issues with him.

“Paid his rent on time. Took care of his property,” Nelson said.

Navy records show Isaak enlisted in the service in 1992 and left in 1997 as a hospital corpsman 3rd Class, with a Good Conduct Medal and National Defense Service Medal.

Isaak appeared in court Friday in a black-and-white striped jail uniform, cuffed at the wrists and waist, and showed no emotion. He spoke only to say, “Yes sir,” when Judge James Hill asked him whether he understood the charges.

Dora Sorenson, a client of Isaak’s chiropractic business, told The Associated Press that he called her the day before the killings and asked to change her appointment from noon Monday to 4 p.m. because he said he had a dental appointment.

“He didn’t appear any different. He was just … Chad,” Sorenson said. “I am in total shock.”

Felony murder carries a maximum punishment of life in prison without parole; North Dakota does not have the death penalty. Isaak is also charged with burglary, unlawful entry into or concealment within a vehicle and unauthorized use of a motor vehicle.