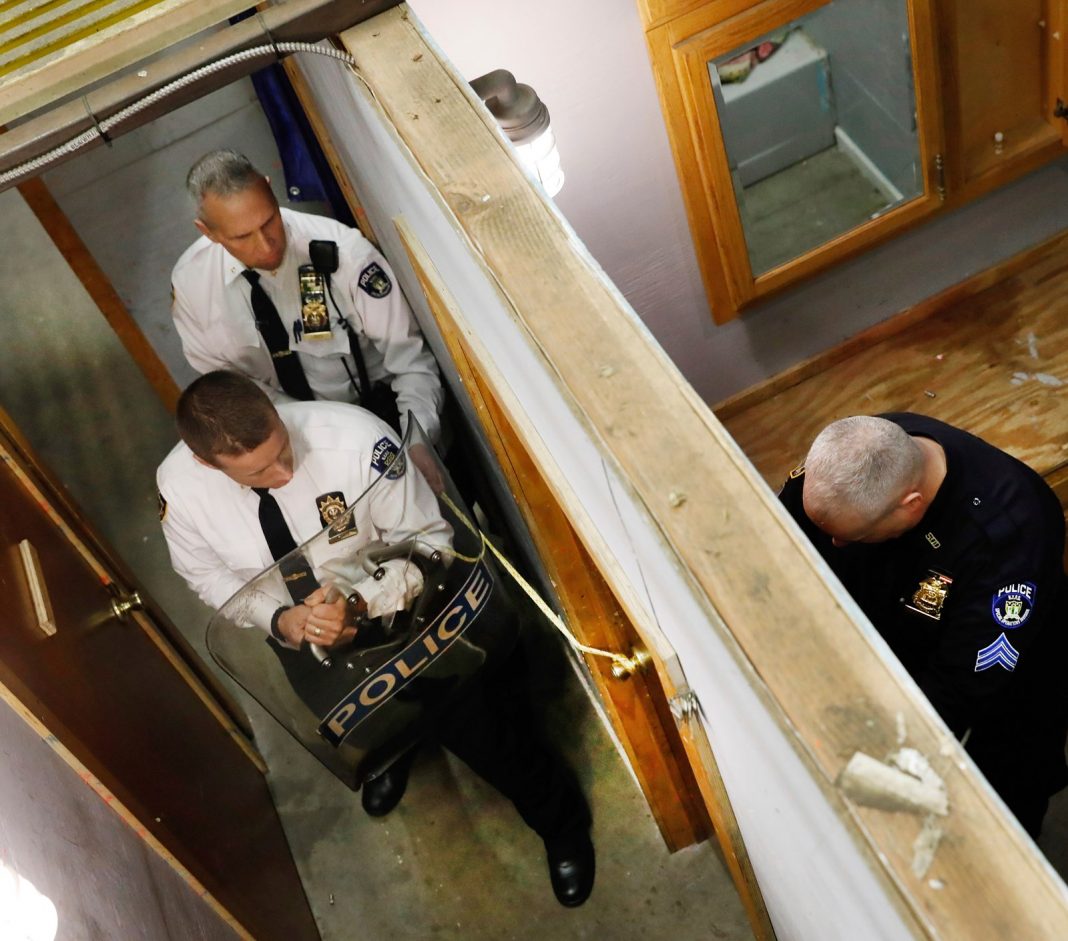 But it is now widely deploying a far simpler technology, a 5½-foot (1½-meter) piece of rope, to help officers deal with one of the diciest kinds of calls.

The department this year started training all 35,000 officers in a technique of using a length of rope to secure the door of a home where a distressed person is threatening harm, temporarily trapping them until backup arrives. The rope makes it virtually impossible for the person inside to burst through the door and cause harm.

The idea, commanders said, is to avoid having gun-toting officers, perhaps only lightly trained in dealing with such situations, in the same adrenaline-charged space as someone acting irrationally, waving a kitchen knife or a pistol.

Officers Jesse Trap and Paulton Chan used the rope last month when they responded to a call of a “person in distress” who had holed up in a Brooklyn apartment.

The door was chained but the officers were able to see that the man had an object that looked like a gun. Remembering a demonstration a sergeant had given them a few weeks earlier, they tied the rope to the handle of the apartment door and pulled tight to prevent the man from bursting into the hallway.

Chan held the rope while Trap tried to speak with the man. Chan, protecting his hands from rope burns with gloves bought at Home Depot, said he felt the door wiggle as the man inside tried to open it.

The technique has actually been a mainstay for decades in the NYPD’s emergency services unit, which has extra training and tools for dealing with people in distress and is often called in by patrol officers to try and diffuse potentially dangerous situations. But it is now being disseminated to the whole force.

The NYPD has changed how its officers interact with what it refers to as “emotionally disturbed people” after a rash of fatal encounters. The department fielded 180,000 calls for people in that state last year. Over the last three years, officers killed 14 people showing signs of emotional distress.

Some involved people who were shot by the police in their own homes and hadn’t posed an immediate danger to anyone else until officers arrived, according to their families.

Robert Lukach, the deputy chief of the special operations unit, suggested to the department that providing all officers with a rope and a door wedge —another way to keep the door shut — could help calm those situations. Instead of rushing in and escalating the risk of violence, officers are using the rope to build a buffer and buy time.

Police also say that, by deescalating the situation, using the rope lessens the chances that the person inside will harm himself or herself.

“Now they’re able to control that door and there’s not a surprise all of a sudden that somebody comes out with a weapon and then they’re confronted, and they have to make a split-second decision,” Lukach said.

The department said it cost $114,000 for the citywide rollout of the kits, including the rope, wedge and a water-resistant pouch.

Lukach recently demonstrated the technique at an NYPD training facility mocked up to look like an apartment building hallway officers might encounter.

Lukach and Capt. Ronald Zedalis portrayed officers responding to a call like the one in Brooklyn, carefully securing the door with a rope while Sgt. Kenneth O’Brien acted out the typical responses of the person inside.

“I have a knife. Leave me alone!” O’Brien said.

“OK. Just stay in there, sir. Stay in there,” Lukach responded after tying the rope to the door handle. “Don’t try to come out. I have control of the door.”

The rope’s length allows officers to stand away from the doorway — and out of the area police call the “fatal funnel” because a gunman will tend to aim there if he or she decides to open fire.

Officers are instructed to make a loop and knot the rope tightly around the handle, then to pull it tight. Rope only works to secure doors that open inward. The NYPD uses wedges, which are basically door stops, for doors that open outward. The rope is always placed, never thrown like a lasso, onto a door handle. Officers will carry the rope in a kit in their cars.

“This is not the wild west,” Sgt. Thomas Brogan said.

The Brooklyn standoff ended peacefully after about six hours. Police flew a drone outside the apartment window — in a first-of-its-kind use for the department — to confirm that the man was surrendering. The 49-year-old man, whose name was not disclosed by police, was taken to a hospital.

The object in the man’s hand turned out to be a harmless imitation pistol.