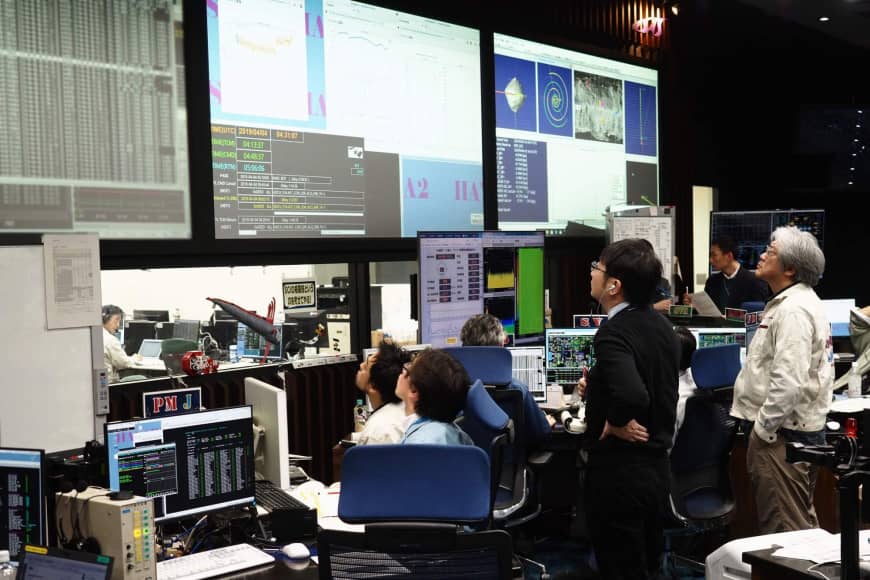 A Japanese probe began descending toward an asteroid on Thursday on a mission to blast a crater into its surface and collect material that could shed light on the solar system’s evolution.

The mission will be the latest in a series of explorations carried out by the Japanese space agency’s Hayabusa2 probe and could reveal more about the origin of life on Earth.

But the task scheduled for Friday will be the riskiest yet of Hayabusa2’s investigations, and involves the release of a device filled with explosives.

The “small carry-on impactor,” a conical device capped with a copper bottom, will emerge from Hayabusa2 on Friday, after the probe has arrived just 500 meters above the asteroid Ryugu.

The probe will then depart the area, and the impactor is programmed to explode 40 minutes later, propelling the copper bottom toward Ryugu, where it should gouge a crater into the surface of the asteroid that sits 300 million km from Earth.

Hayabusa2 will move away from the area to avoid being damaged by debris from the explosion or the collision with Ryugu.

As it does so it will release a camera slightly above the site of the detonation that should be able to capture images of the event.

The camera should be able to transmit those images, but it is unclear when the first confirmation of the mission’s success will come.

It will take two weeks for the probe itself to return to its “home position” near Ryugu after the detonation and impact.

“We are thrilled to see what will happen when the impactor collides with the asteroid,” Takashi Kubota, engineering researcher at the Japanese space agency (JAXA), told reporters earlier this week.

The crater could be as large as 10 meters in diameter if the surface is sandy, but a smaller 3 meters across if it is rocky, according to JAXA scientists.

NASA’s Deep Impact project succeeded in creating an artificial crater on a comet in 2005, but only for observation purposes.

The aim of the crater on Ryugu is to throw up “fresh” material from under the asteroid’s surface that could shed light on the early days of the solar system.

In February, Hayabusa2 touched down briefly on Ryugu and fired a bullet into the surface to puff up dust for collection, before blasting back to its holding position.

The asteroid is thought to contain relatively large amounts of organic matter and water from some 4.6 billion years ago when the solar system was born.

The Hayabusa2 mission, with a price tag of around ¥30 billion ($270 million), was launched in December 2014 and is scheduled to return to Earth with its samples in 2020.

Photos of Ryugu — which means “Dragon Palace” in Japanese and refers to a castle at the bottom of the ocean in an ancient Japanese tale — show the asteroid has a rough surface full of boulders.

Hayabusa2 observes the surface of the asteroid with its camera and sensing equipment but has also dispatched two tiny MINERVA-II rover robots as well as the French-German robot MASCOT to help surface observation.

At about the size of a large fridge, Hayabusa2 is equipped with solar panels and is the successor to JAXA’s first asteroid explorer, Hayabusa — Japanese for falcon.

That probe returned with dust samples from a smaller, potato-shaped asteroid in 2010, despite various setbacks during its epic seven-year odyssey and was hailed as a scientific triumph.

Takanohana: The nail that sumo pounded down
This is the ninth in a series on influential figures in the Heisei Era, which began in 1989 and will end when Emperor Akihito abdicates on April 30. In Heisei, Japan was roiled by economic exce…