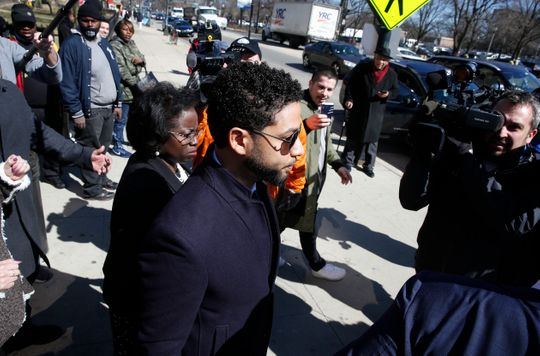 Questions persist about what made prosecutors abandon the case barely five weeks after “Empire” actor Jussie Smollett was accused of lying to police about being the target of a racist, anti-gay attack in Chicago. (March 28)
AP, AP

Jussie Smollett’s lawyer, the ever pugnacious Mark Geragos, had a message to the city of Chicago on Friday: Bring. It. On.

Firing back at Chicago’s vow to pursue the “Empire” star in court to force him to pay a fine of up to $390,000 for police overtime in the investigation of his now-dismissed hate-crime case, Geragos told the city to go jump in Lake Michigan.

In the process, he charged the city’s stance is “unconstitutional,” “malicious,” “false and defamatory,” harassment and a violation of “double jeopardy” bans. Geragos strongly hinted if the city sues Smollett, Smollett will respond in kind.

“Your letter constitutes part of a course of conduct intended to harass and irreparably injure Mr. Smollett,” Geragos declared in a missive sent to Edward Siskel, head of the city’s law department, which released a copy to the media on Friday.

“As explained below, your letter is both factually and legally flawed and Mr. Smollett will not be intimidated into paying the demanded sum.”

What’s more, Geragos wrote, if the city continues to pursue Smollett, his legal team promises to make things uncomfortable as possible for city officials, including outgoing Mayor Rahm Emanuel and Police Superintendent Eddie Johnson, plus the two brothers who attacked Smollett (they claim because he paid them to stage a hoax attack), and their lawyers.

In the event of a lawsuit, Geragos said he would demand the release of the entire police investigative file on the case, both to Smollett and to the public, and would seek to depose Emanuel, Johnson and the others under oath.

“Mr. Smollett’s preference remains, however, that this matter be closed and that he be allowed to move on with his life,” Geragos concluded.

The upshot is the Smollett scandal that has gripped Chicago for the last three months isn’t over, not by a long shot.

And if this latest display of legal chest thumping actually does end up in a civil suit, complete with a trial of some sort, maybe the citizens of the Windy City will finally get to learn what actually happened on Jan. 29, when Smollett claimed he was attacked by two men who shouted homophobic and racist slurs, beat him, threw bleach on him, dangled a noose around his neck and declared “This is MAGA country!”

Passions are still running high in Chicago about the Smollett scandal and its unsatisfactory denouement. Will the prospect of a juicy civil suit be entertaining enough to calm things down, or will it only infuriate everybody even more?

Geragos, who has his own legal woes as an alleged unindicted co-conspirator in an unrelated federal case, demonstrated in his letter to the city that Smollett isn’t going away quietly. All criminal charges against him were dismissed and sealed, and Smollett “vehemently” denies he lied to Chicago police about the alleged attack, Geragos wrote.

“Thus, your claim that Mr. Smollett filed a false police report and orchestrated his own attack is false and defamatory,” he wrote. “Furthermore, it is apparent that your threats were made maliciously and in bad faith, and without an honest belief that a cause of action against Mr. Smollett exists, even under the lesser preponderance-of-evidence standard” in civil lawsuits.

And all this is because Smollett refused to pay a $130,000 fine the city declared he owed to cover the cost of police overtime. After the one-week deadline passed Thursday for him to pay up, the city told him in a letter it will sue him in civil court under a municipal code that allows the city to impose fines on people who make “false statements” to authorities, thus wasting time and money.

Moreover, the city could collect up to three times the amount of damages the city sustains as a result of the violation – in Smollett’s case, that would be $390,000.

“As you know, neither the threats in your letter, nor the defamatory statements they rely upon, are afforded First Amendment protections,” Geragos wrote. “Moreover, your unprecedented attempt to file a civil lawsuit against Mr. Smollett…is unconstitutional as applied to Mr. Smollett.”

Initially, Chicago police treated Smollett as a victim, but their investigation of the alleged attack later shifted to a suspicion that Smollett had faked it. Eventually they charged him with felony disorderly conduct for allegedly lying on a police report, and a grand jury subsequently indicted him on 16 counts of lying to police.

Chief Johnson declared Smollett had “smeared” Chicago’s reputation and wasted police time, and all just to boost his profile and his salary on “Empire.” Smollett was arrested, booked and released after paying a percentage of his bond, $10,000.

Then, days later, a stunner: Cook County State’s Attorney Kim Foxx’s office dropped all the charges without detailing why. Smollett forfeited his $10,000 and agreed to community service, but he didn’t apologize and instead declared himself innocent and exonerated. That turned out to be incorrect, according to Foxx, but she couldn’t or wouldn’t explain why.

Immediately, Emanuel, Johnson, the police unions, scores of ordinary citizens and even President Trump erupted with outraged incredulity, lashing out at Foxx and at Smollett.

They’re still miffed at Foxx, with the police unions and associations this week calling for her resignation. The newly elected mayor, Lori Lightfoot, also said she thought it “looked like” Smollett staged a hoax crime.