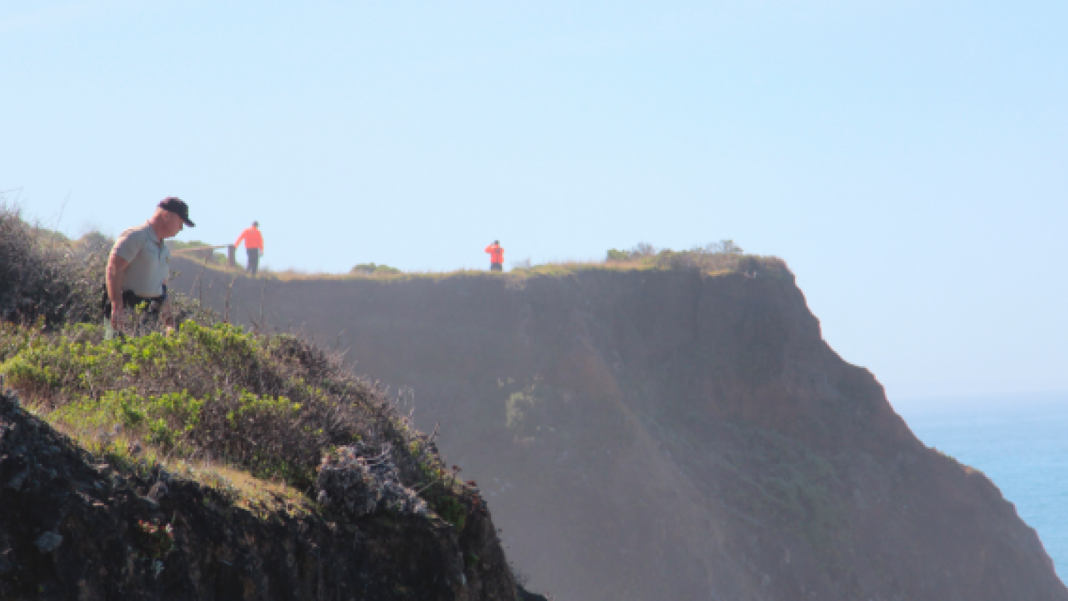 FILE – In this March 29, 2018 file photo, Deputy Bill Holcomb looks down the cliff near the crash site near Mendocino, Calif., as search and rescue volunteers scour the area behind him on and resume looking for children, still missing after their parent’s SUV plunged into the ocean Monday. A California Highway Patrol investigator testified Thursday, April 4, 2019 that Sarah Hart searched whether death by drowning was relatively painless hours before her wife drove an SUV off a cliff, killing them and six adopted children in waters below. A special coroner’s jury in Mendocino County is trying to determine whether the March 2018 deaths were murder-suicide or accidental. (Kale Williams/The Oregonian via AP)

SAN FRANCISCO – A special coroner’s jury in California ruled the deaths of two women and their six adopted children was a murder-suicide after hearing testimony that one of the women had searched death by drowning online and the other deliberately stepped on the gas, sending their SUV plunging off a cliff.

Jurors deliberated for about an hour Thursday before returning the unanimous verdicts that Jennifer and Sarah Hart killed themselves on March 26, 2018, in Mendocino County. The jury decided the six children, 12 to 19, died at the hands of another and not by accident.

Authorities had indicated they believed the crash was deliberate but wanted a jury to make official findings.

The deaths drew national attention, partly because the women were alleged to have abused their children. The body of Devonte Hart, 15, who was black and had gained attention when he was photographed in tears while hugging a white police officer during a 2014 protest in Portland, Oregon, has not been recovered.

Jurors were instructed to choose from four manners of death for each of the eight people: natural causes, suicide, accident or an intentional act by another. They sat through nearly two full days of testimony.

“It is my belief that both Jennifer and Sarah succumbed to a lot of pressure,” sheriff’s Lt. Shannon Barney said Thursday. “Just a lot of stuff going on in their lives, to the point where they made this conscious decision to end their lives this way and take their children’s lives.”

The crash happened days after authorities in Washington state opened an investigation into allegations of neglect. The bodies of both women were found in the vehicle, which landed below a cliff located more than 160 miles (250 kilometers) north of San Francisco.

The Hart family had fled their Woodland, Washington, home March 23 after a visit from social workers that day.

Jennifer Hart searched suicide, drowning, Benadryl dosages and overdose methods on the internet throughout the drive to California, said California Highway Patrol investigator Jake Slates. She also queried whether death by drowning would be painful. Authorities recovered the deleted searches from her phone.

“They both decided that this was going to be the end,” Slates said. “That if they can’t have their kids that nobody was going to have those kids.”

The bodies of siblings Markis, Jeremiah and Abigail were found the same day near the car. Weeks later, the body of Ciera Hart was pulled from the Pacific Ocean. Hannah Hart was eventually identified through a DNA match.

Slates said that Jennifer Hart, who rarely drank, had a blood alcohol level over the legal limit and may have been “drinking to build up her courage.” Sarah Hart had 42 doses of generic Benadryl in her system and the children also had high amounts of the sleep-inducing drug in their bodies, he said.

A neighbor of the Harts had filed a complaint with the state, saying the children were apparently being deprived of food as punishment. No one answered when social workers went to the family’s home.

A witness who was camping by their vehicle says he heard their car rev up and peal out around 3 a.m. March 26.

Sarah Hart pleaded guilty in 2011 to a domestic assault charge in Minnesota over what she said was a spanking given to one of her children. Oregon child welfare officials also investigated the couple in 2013, but closed the case without taking any action.