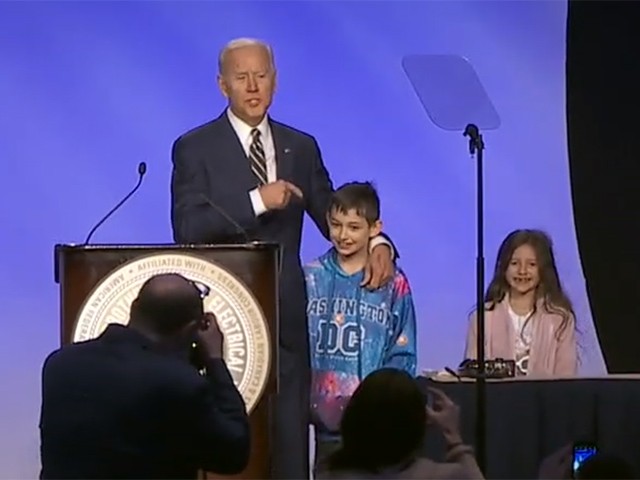 Former Vice President Joe Biden joked about the continued controversy over his inappropriate touching on Friday, as he explores a run for president in 2020.

“I just wanted to let you know I had permission to hug Lonnie,” Biden said after taking the stage and hugging International Brotherhood of Electrical Workers union president Lonnie Stephenson.

Biden was invited to speak the IBEW at their conference in Washington, DC, the first public appearance since several women started accusing the former Vice President of making them uncomfortable with unwanted touching.

In the middle of his speech, Biden invited several children on stage and shook their hands. He also put his arm around one boy and said defensively, “He gave me permission to touch him, all right?”

“He gave me permission to touch him all right?” Biden says defensively. “Everyone knows I like kids better than people.” pic.twitter.com/elwhLMylA0

He apologized for interrupting the speech but added, “Everyone knows I like kids better than people.”

Many in the audience laughed in response to the joke.

Biden defended the concept of unions, assuring the audience that he shared their blue-collar values.

He said he was frustrated that the elites in America forgot that the American worker kept them in business, such as fixing their power lines after a storm.

“We’ve gotten so damn sophisticated, we’ve gotten damn elitist,” he shouted, noting that workers deserved thanks for keeping America running. “I hate the way things have changed the last 15-20 years.”

The former Vice President expressed optimism that the economy was doing much better, giving workers a chance to improve their lives.

Biden’s speech was filled with colloquialisms engineered to generate support from blue-collar workers.

“I see people that have busted their necks their whole lives to earn your pensions, and when you retire you deserve every damn penny you work for, not a penny less,” he shouted. “I mean it! I mean it! I’m tired of it!”

Biden said that he repeatedly spoke to his “sophisticated friends” demanding that they treat people better.

“You guys are like me, I never walk away from a table without thanking a waiter,” he said. “Not a joke. That was the way I was raised.”