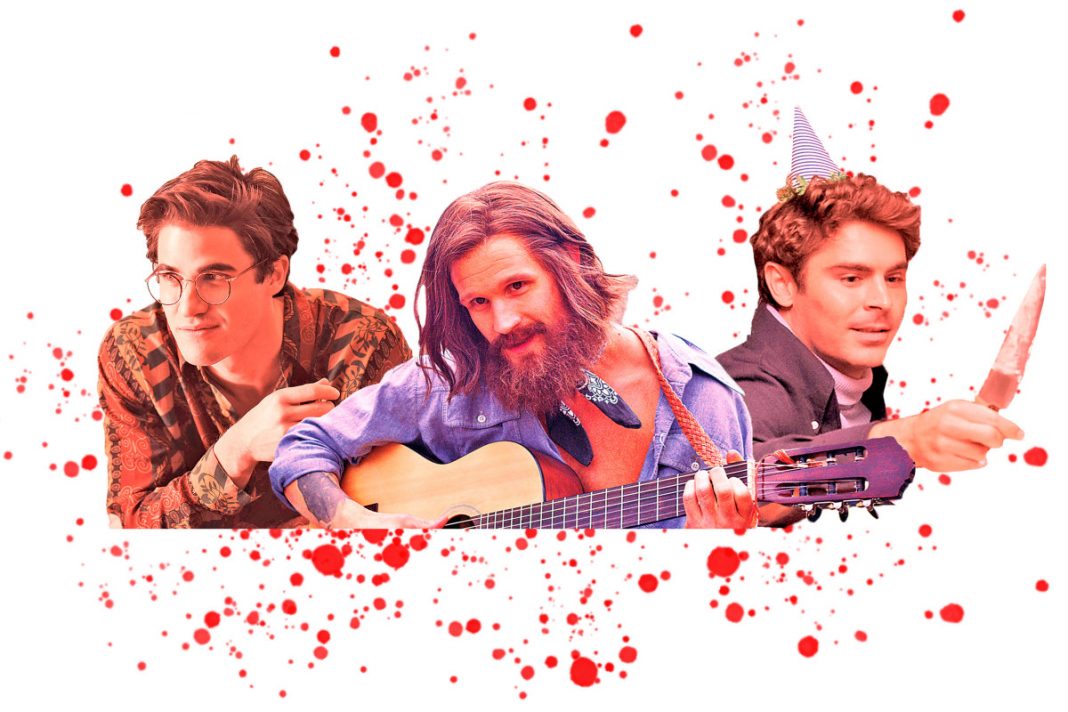 Hollywood is making a killing . . . with movies about serial killers.

Over the next two months, audiences will be faced with three real-life-murderer flicks: “Extremely Wicked, Shockingly Evil and Vile” about Ted Bundy, and “Charlie Says” and “The Haunting of Sharon Tate” (out Friday), both about Charles Manson. The Helter Skelter whack job, who died in 2017, will also play a part in Quentin Tarantino’s “Once Upon a Time in Hollywood,” out in July.

That’s nearly as many movies as Marvel plans to release in 2019, but instead of being about Spider-Man and Thor these films concern two monsters who killed, directly or indirectly, at least 39 people. Not all that long ago! Bundy and Manson committed atrocities, the effects of which are still profoundly felt among victims’ families right this second. It’s a rotten trend in which Hollywood is glamming up — and cashing in on — the excruciating pain of others.

That’s right. Not content with treating mass murder like it’s pumpkin-spice flavor in the fall, Hollywood is casting hotties to play them too. Efron, the “High School Musical” heartthrob whose abs have a loyal following, is Bundy in “Extremely Wicked” (out May 3). And Matt Smith, the erudite Brit with bedroom eyes from “The Crown,” is Manson in “Charlie Says” (out May 10). They join the adorable Darren Criss, who won an Emmy for his performance as fellow serial killer Andrew Cunanan on FX’s similarly slick “The Assassination of Gianni Versace: American Crime Story.”

“Extremely Wicked” director Joe Berlinger defended his sexed-up film to the website Bustle. “Look, there have been a lot of movies about Adolf Hitler and about the Holocaust,” he said.

Well, I’ve seen plenty of Hitler films — dramatic, satirical, musical — but I have not yet seen the Führer rip off his shirt to reveal a rippling torso like Efron does several times during “Extremely Wicked,” as if contractually obligated to.

Berlinger went on: “I think there should be no censoring of subject matter, if it’s done responsibly. And even if it’s done irresponsibly, people have the right to tell any story they want to tell.”

Outrage, or a family member’s grief, isn’t censorship. Rather, it’s an honest appeal to human decency and a sense of empathy. The pressing question is: Do we have any of that left?

After the “Serial” podcast and HBO’s “The Jinx” debuted in 2014 and 2015, respectively, true-crime TV shows and films exploded, much like reality TV did post-“Survivor.” But unlike “America’s Most Wanted,” which juxtaposed cheesy re-enactments with brightly lit interviews, these new programs were bingeable, big budget — and sexy. Those that followed in their wake quickly shed their journalistic aspirations and became just more empty entertainment. Now, we watch “The Assassination of Gianni Versace” and “Conversations With a Killer: The Ted Bundy Tapes” like they’re “Halloween.” We get mad when a friend spoils “the plot.” We are excited to tune in.

Humans have always been addicted to tragic developing news stories, but have we ever before been so openly giddy to relive someone else’s horrors? No way.

It would seem that the friends and relatives of the dead are the only people who understand humanity’s downward spiral.

In response to the new Hilary Duff-led film “The Haunting of Sharon Tate,” Tate’s sister Debra lambasted its existence to People magazine. “It doesn’t matter who it is acting in it — it’s just tasteless,” she said. “It’s classless how everyone is rushing to release something for the 50th anniversary of this horrific event.”

Tate’s right all round. Delivering these films in bulk right now is tasteless, and the actors are not to blame. Smith has been well-received as Manson. And Efron, for what it’s worth, is quite good in “Extremely Wicked,” which I saw at the Sundance Film Festival. But having a hunk play a disgusting criminal is a key to making an exploitative film that aims to explain Bundy’s charm more so than his derangement.

It’s a movie that makes you laugh, makes you blush and leaves you feeling queasy — for the wrong reasons.