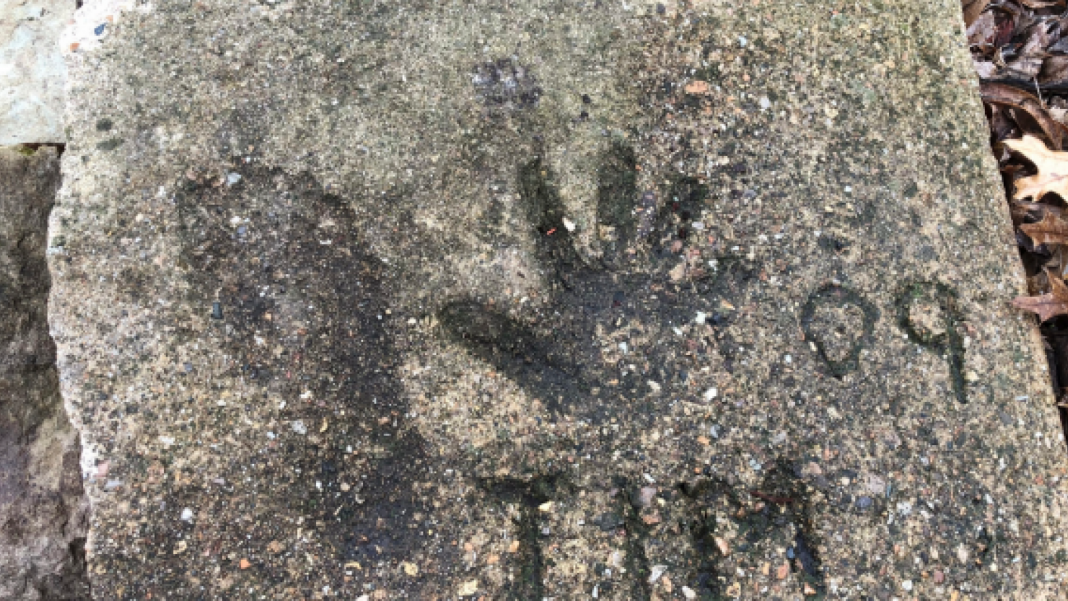 A slab of concrete sits in the backyard of the house where Timmothy Pitzen used to live in Aurora, Ill., Thursday, April, 4, 2019. The man who lives in the house now, Pedro Melendez, says he didn’t know the boy but saved the concrete slab with Tim’s name, handprint and footprint etched in it when he redid the back patio. Authorities conducted DNA testing to try to determine Thursday whether a teenager found wandering the streets of a Kentucky town is who he claims to be — an Illinois boy who disappeared eight years ago around the time his mother took her own life. (AP Photo/Carrie Antlfinger)

CINCINNATI – The Latest on the investigation of a man who allegedly claimed to be a long-missing child from Illinois (all times local):

An FBI affidavit says an Ohio man who authorities say falsely claimed to be an Illinois boy missing for eight years has made similar claims twice before.

The affidavit filed in federal court Friday says 23-year-old Brian Rini repeatedly told investigators he was Timmothy Pitzen, who disappeared in Aurora, Illinois, in 2011 at age 6.

The affidavit says Rini refused to be fingerprinted but submitted to a DNA test after which his true identity was determined.

The affidavit says Rini had watched a TV show about Pitzen and told investigators he wanted to get away from his family.

Investigators determined Rini had twice before falsely portrayed himself as a juvenile sex trafficking victim.

A 23-year-old man authorities say falsely claimed to be an Illinois boy missing for eight years is being held in an Ohio jail.

Hamilton County’s jail site shows Brian Rini of Medina, Ohio, was jailed Thursday. There were no charges listed Friday and no other information was available immediately.

The FBI announced Thursday afternoon that DNA tests disproved the claim of a person who Wednesday identified himself as Timmothy Pitzen, who disappeared in Aurora, Illinois, in 2011 at age 6.

Rini was released on probation from Ohio prison last month after serving more than a year on burglary and vandalism charges.

A day of false hope has given way to questions about why a man would claim to be an Illinois boy who disappeared eight years ago.

The FBI declared the man’s story a hoax Thursday one day after he identified himself to authorities as Timmothy Pitzen, who disappeared in 2011 at age 6.

Newport Police Chief Tom Collins identified the man to ABC as 23-year-old ex-convict Brian Rini of Medina, Ohio, who was released from prison less than a month ago after serving more than a year.

The man had told police he’s Timmothy and escaped from men who held him captive.