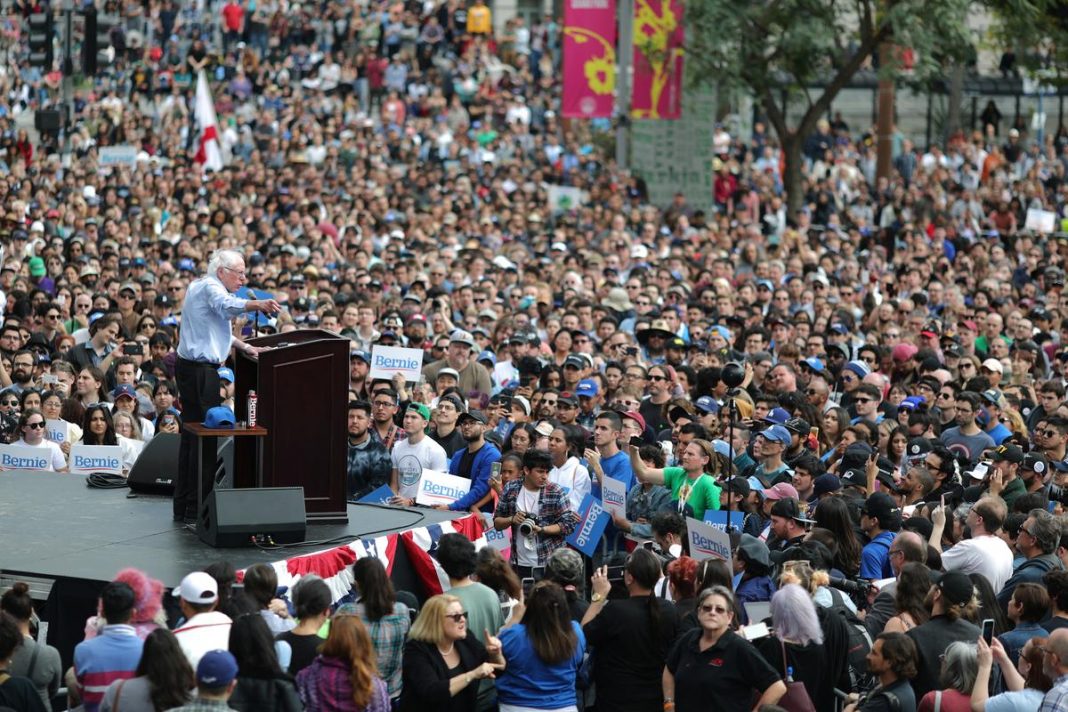 (Reuters) – The largest Democratic field in the modern political era is lining up to seek the party’s 2020 presidential nomination – and is expected to keep growing.

The diverse group vying to challenge President Donald Trump, the likely Republican nominee, includes six U.S. senators. A record six women are running, as well as black, Hispanic and openly gay candidates who would make history if one of them became the party’s nominee.

Here are the Democrats who have launched campaigns or are expected to pursue a presidential bid, listed in order of their RealClearPolitics national polling average for those who register in opinion surveys. (For a graphic, see: tmsnrt.rs/2Ff62ZC)

The leader in polls of Democratic presidential contenders is not even a candidate yet. But Biden, who served eight years as vice president under former President Barack Obama and 36 years in the U.S. Senate, looks poised to join the 2020 race. At 76, he will be the second oldest candidate in the Democratic nominating contests, after Senator Bernie Sanders. Biden will be a key figure in the Democratic debate over whether a liberal political newcomer or a centrist veteran is needed to win back the White House. Liberal activists criticize his Senate record, including his authorship of the 1994 crime act that led to increased incarceration rates, and his ties to the financial industry, which is prominent in his home state of Delaware. Biden, who relishes his “Middle-Class Joe” nickname and touts his working-class roots, made unsuccessful bids for the nomination in 1988 and 2008. Biden, recently the subject of allegations of unwanted physical contact with women, in video pledged to be “more mindful” of respecting “personal space,” an attempt to tamp down the controversy.

The senator from Vermont lost the Democratic nomination in 2016 to Hillary Clinton but has jumped in for a second try. In the 2020 race, Sanders, 77, will have to fight to stand out in a packed field of progressives touting issues he brought into the Democratic Party mainstream four years ago. His proposals include free tuition at public colleges, a $15 minimum wage and universal healthcare. He benefits from strong name recognition and a robust network of small-dollar donors, helping him to raise $5.9 million during his first day in the contest. Sanders, whose father was a Jewish immigrant from Poland, has shown a more personal side in this campaign, highlighting his struggles while growing up in a working-class family. He also has tried to reach out to black and Hispanic leaders after having trouble winning over minority voters in 2016.

The first-term senator from California would make history as the first black woman to gain the nomination. Harris, 54, the daughter of immigrants from Jamaica and India, announced her candidacy on the holiday honoring slain civil rights leader Martin Luther King Jr. She has made a quick impact in a Democratic race that will be heavily influenced by women and minority voters. She raised $1.5 million in the first 24 hours of her campaign and drew record ratings on a CNN televised town hall. She supports a middle-class tax credit, Medicare for All healthcare funding reform, the Green New Deal and the legalization of marijuana. Her track record as San Francisco’s district attorney and California’s attorney general has drawn scrutiny in a Democratic Party that has shifted in recent years on criminal justice issues.

The former three-term Texas congressman jumped into the race on March 14 – and has been jumping on to store countertops ever since to deliver his optimistic message to voters in early primary states. O’Rourke, 46, gained fame last year for his record fundraising and ability to draw crowds ahead of his unexpectedly narrow loss in the U.S. Senate race against Republican incumbent Ted Cruz. O’Rourke announced a $6.1 million fundraising haul for the first 24 hours of his campaign, besting his Democratic opponents. But with progressive policies and diversity at the forefront of the party’s nominating battle, O’Rourke will face a challenge as a wealthy white man who is more moderate on several key issues than many of his competitors.

The 69-year-old senator from Massachusetts is a leader of the party’s liberals and a fierce Wall Street critic who was instrumental in creating the Consumer Financial Protection Bureau. She has focused her presidential campaign on her populist economic message, promising to fight what she calls a rigged economic system that favors the wealthy. She also has proposed eliminating the Electoral College, vowed to break up Amazon, Google and Facebook if elected, and sworn off political fundraising events to collect cash for her bid. Warren apologized earlier this year to the Cherokee Nation for taking a DNA test to prove her claims to Native American ancestry, an assertion that has prompted Trump to mockingly refer to her as “Pocahontas.”

Booker, 49, a black senator from New Jersey and former mayor of Newark, gained national prominence in the fight over Brett Kavanaugh’s Supreme Court nomination. He has made U.S. race relations and racial disparities a focus of his campaign, noting the impact of discrimination on his family. He embraces progressive positions on Medicare coverage for every American, the Green New Deal and other key issues, and touts his style of positivity over attacks. Booker eats a vegan diet and recently confirmed rumors he is dating actress Rosario Dawson.

The third-term senator from Minnesota was the first moderate in the Democratic field vying to challenge Trump. Klobuchar, 58, gained national attention in 2018 when she sparred with Brett Kavanaugh during Senate hearings for his Supreme Court nomination. On the campaign trail, the former prosecutor and corporate attorney supports an alternative to traditional Medicare healthcare funding and is taking a hard stance against rising prescription drug prices. Klobuchar’s campaign reported raising more than $1 million in its first 48 hours. Her campaign announcement came amid news reports that staff in her Senate office were asked to do menial tasks, making it difficult to hire high-level campaign strategists.

The 37-year-old mayor of South Bend, Indiana, is emerging from underdog status as he begins to build momentum with young voters. A Harvard University graduate and Rhodes Scholar at the University of Oxford, he speaks seven languages and served in Afghanistan with the U.S. Navy Reserve. He touts himself as representing a new generation of leadership needed to combat Trump. Buttigieg would be the first openly gay presidential nominee of a major American political party.

The secretary of housing and urban development under President Barack Obama would be the first Hispanic to win a major U.S. party’s presidential nomination. Castro, 44, whose grandmother was a Mexican immigrant who immigrated to Texas, has used his family’s personal story to criticize Trump’s border policies. Castro advocates for a universal pre-kindergarten program, supports Medicare for All and cites his experience to push for affordable housing. He announced his bid in his hometown of San Antonio, where he once served as mayor and a city councilman. His twin brother, Joaquin Castro, is a Democratic congressman from Texas.

Gillibrand, known as a moderate when she served as a congresswoman from upstate New York, has refashioned herself into a staunch progressive, calling for strict gun laws and supporting the Green New Deal. The senator for New York, who is 52, has led efforts to address sexual assault in the military and on college campuses, and she pushed for Congress to improve its own handling of sexual misconduct allegations. On the campaign trail, she has made fiery denunciations of Trump. She released her tax returns for the years 2007 through 2018, offering the most comprehensive look to date at the finances of a 2020 White House candidate, and has called on her rivals to do the same.

The Washington state governor has made fighting climate change the central issue of his campaign. As governor, Inslee, 68, has moved to put a moratorium on capital punishment and fully implement the Affordable Care Act, commonly known as Obamacare, and accompanying expansion of Medicaid health coverage for the poor. He has not settled on a position on Medicare for All but does support the Green New Deal backed by progressives. Inslee spent 15 years in Congress before being elected governor in 2012.

The 67-year-old former Colorado governor has positioned himself as a centrist and an experienced officeholder with business experience. He is the only Democratic presidential candidate so far to oppose the Green New Deal plan to tackle climate change, saying it would give the government too much power in investment decisions. During his two terms in office, Colorado’s economy soared and the Western state expanded healthcare, passed a gun control law and legalized marijuana. The former geologist and brew pub owner is among the many candidates who have refused to take corporate money. He previously served as mayor of Denver.

The former U.S. representative from Maryland became the first Democrat to enter the 2020 race, declaring his candidacy in July 2017. Delaney, 55, plans to focus on advancing only bipartisan bills during the first 100 days of his presidency if elected. He’s also pushing for a universal healthcare system, raising the federal minimum wage and passing gun safety legislation.

The Samoan-American congresswoman from Hawaii and Iraq war veteran is the first Hindu to serve in the U.S. House of Representatives. After working for her father’s anti-gay advocacy group and drafting relevant legislation, she was forced to apologize for her past views on same-sex marriage. Gabbard, 37, has been against U.S. intervention in Syria and slammed Trump for standing by Saudi Arabia after the murder of journalist Jamal Khashoggi. She endorsed Bernie Sanders during his 2016 presidential campaign.

The moderate nine-term congressman from a working-class district in the battleground state of Ohio has touted his appeal to the blue-collar voters who fled to Trump in 2016. He says Trump has turned his back on those voters and failed to live up his promise to revitalize the manufacturing industry. Ryan, 45, pledges to create jobs in new technologies and to focus on public education and access to affordable healthcare. He first gained national attention when he unsuccessfully tried to unseat Nancy Pelosi as the House Democratic leader in 2016, arguing it was time for new leadership. A former college football player, he also has written books on meditation and healthy eating.

The entrepreneur and former tech executive is focusing his campaign on an ambitious universal income plan. Yang, 44, wants to guarantee all American citizens between the ages of 18 and 64 a $1,000 check every month. The son of immigrants from Taiwan, Yang also is pushing for Medicare for All and proposing a new form of capitalism that is “human-centered.” He lives in New York.

The 66-year-old New York Times best-selling author, motivational speaker and Texas native believes her spirituality-focused campaign can heal America. A 1992 interview on Oprah Winfrey’s show propelled her to make a name for herself as a “spiritual guide” for Hollywood and a self-help expert. She is calling for $100 billion in reparations for slavery over 10 years, gun control, education reform and equal rights for lesbian and gay communities. In 2014, she made an unsuccessful bid for a House seat in California as an independent.

Messam, 44, defeated a 16-year incumbent in 2015 to become the first black mayor of in the Miami suburb of Miramar. He was re-elected in March. The son of Jamaican immigrants, he played on Florida State University’s 1993 national championship team, and then started a construction business with his wife. He has pledged to focus on reducing gun violence, mitigating climate change and reducing student loan debt and the cost of healthcare.