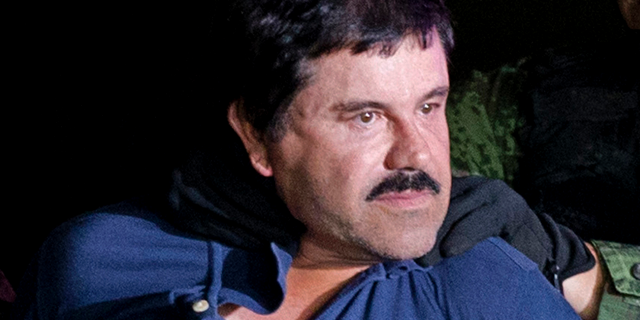 Orange might not be the new black after all.

The powers-that-be were apparently paying attention earlier this week when Emma Coronel Aispuro, the 29-year-old beauty queen wife of convicted drug lord Joaquin “El Chapo” Guzman said her husband – from behind bars – had handed over the rights to his infamous name and provided his signature for a new company — El Chapo Guzman: JGL LLC.

But Coronel soon discovered it’s not quite that easy to make money off the name of a convicted drug trafficker (who also dabbled in mass murder and money laundering).

Authorities are fighting back, frustrating Coronel’s efforts to register Chapo’s name as a trademark and charging that Coronel’s business glorifying the cartel kingpin “violates public order, morality and good manners,” according to the Associated Press.

Mariel Colon, a legal representative for Chapo, had confirmed to Fox News that production was in process and the line – likely to be comprised of caps and jackets bearing the former Sinaloa cartel kingpin’s name – would hopefully hit store shelves by summer.

“This company was formed here in New York. Emma is the president of this LLC,” Colon said, stressing that Guzman himself wouldn’t make a dime and his name is not listed on the LLC.

A lawyer for Guzman and Coronel did not immediately respond to a comment request regarding the pushback from officials on Friday.

Joaquin “El Chapo” Guzman is made to face the media in Mexico City as he is escorted by Mexican soldiers following his recapture six months after escaping from a maximum security prison. The notorious Mexican drug lord was convicted of drug-trafficking charges, Tuesday, Feb. 12 2019, in federal court in New York. (AP Photo/Eduardo Verdugo, File)

Coronel has been married to Guzman for 11 years and shares two 7-year-old twins with the drug kingpin, who was convicted in February on drug trafficking, money laundering and firearms possession charges. Her husband was found guilty of conspiring to smuggle large volumes of cocaine, heroin and methamphetamine into the United States and will likely spend the rest of his life in prison (unless he breaks out — which he’s done several times before).

CHAPO’S BEAUTY QUEEN WIFE LIVING LAVISHLY – AWAY FROM THE COURTROOM

Coronel had taken to her Instagram account to promote the clothing line, boasting it would promote both her husband’s style and her own. The former beauty queen, who previously shared poolside bikini pics and showed off a lavish lifestyle as her husband awaited his trial in New York, suddenly swapped her more curve-hugging designer duds for conservative blouses and streamlined black suits, for courthouse appearances, where she became a paparazzi staple throughout the lengthy trial.

But whether or not she will go on to make a buck with a line in homage to her husband, remains to be seen.

Danielle Wallace and the Associated Press contributed to this report