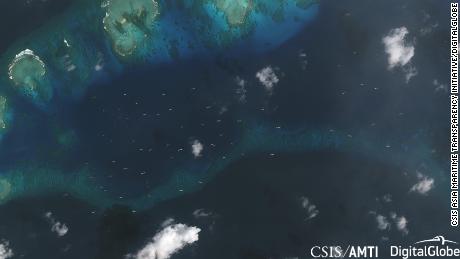 Facebook
Twitter
Google+
Pinterest
WhatsApp
Duterte’s speech at a rally in the city of Puerto Princesa in Palawan came days after the Philippine government claimed as many as 275 Chinese boats and ships had been spotted in recent months around Manila’s Thitu Island in the Spratly Island chain.

“Let us be friends, but do not touch Pagasa Island and the rest,” Duterte said, according to CNN Philippines, using the Philippine word Pagasa for Thitu.

“If you make moves there, that’s a different story. I will tell my soldiers, ‘Prepare for suicide mission’.”

“I will not plead or beg, but I’m just telling you that lay off the Pag-asa because I have soldiers there,” he said, according to CNN Philippines.

CNN has reached out to the Philippines government for further comment.

A small Philippine military garrison as well as about 100 civilians are based on Thitu, which lies about 500 kilometers (310 miles) from Palawan, one of the islands that make up the Philippines.

Tensions have risen since the start of 2019 in the South China Sea, one of the world’s most disputed regions and an important shipping lane.

The Philippines and China each claim overlapping areas of the vast sea, along with multiple other countries including Vietnam, Malaysia and Brunei. The area where Thitu is located is also claimed by China as part of its territory.

The latest arrival of Chinese vessels around Thitu Island has provoked a stern response from Manila.

The Philippines Department of Foreign Affairs in a statement Thursday said their presence was “illegal” and a “clear violation of Philippine sovereignty.”

“It has been observed that Chinese vessels have been present in large numbers and for sustained and recurring periods — what is commonly referred to as ‘swarming’ tactics — raising questions about their intent as well as concerns over their role in support of coercive objectives,” the Philippine statement said.

Independent analysis by the Asia Maritime Transparency Initiative (AMTI) of the hundreds of vessels which have appeared around Thitu Island since January has determined they are composed of dozens of fishing vessels, as well as China Coast Guard ships and People’s Liberation Army Navy ships.

When asked about the disputed island on Wednesday, Chinese Foreign Ministry spokesman Geng Shuang pointed to a meeting between Philippine and Chinese representatives to discuss a bilateral consultation mechanism to avoid South China Sea conflicts.

“I believe that the consensus reached by the two sides through discussion in this meeting is the best answer to your question,” he said.

To reinforce its claims to the South China Sea, China has built and militarized artificial islands and has attempted to undermine other countries’ positions through a combination of diplomacy and intimidation.

Its aggressive moves in the region had antagonized previous Philippine administrations, which took Beijing to court to prove its claims over the sea.

But relations between China and the Philippines have warmed considerably since the 2016 inauguration of Duterte, who has pushed for a closer economic relationship with Beijing.

“I need China. More than anybody else at this point, I need China,” Duterte said before flying to China in April 2018.

Compared with his predecessors, Duterte has viewed the dispute in the South China Sea as more negotiable than a matter of principle.
But China has been strengthening its hold over the region. In May 2018, Beijing announced it had successfully landed bombers on islands under its control for the first time, a big step in the militarization of the region.

The United States has also ramped up its freedom of navigation exercises in the region under US President Donald Trump, in an apparent attempt to hold back Chinese influence.

In a defiant statement to then-US Secretary of Defense James Mattis during a Beijing meeting in June 2018, President Xi Jinping said China wouldn’t give up “any inch of territory.”

Philippines armed forces spokesperson Edgard Arevalo cautioned on Monday that it was difficult to quantify how many ships are around the island at any one time, as Chinese vessels “come and go” from the area.

In an article published in February, the Asia Maritime Transparency Initiative said the sudden increase in the number of ships between December and January appeared to be a response to reclamation and construction by the Philippines government.

“The fishing boats have mostly been anchored between 2 and 5.5 nautical miles west of Thitu, while the naval and coast guard ships operate slightly farther away to the south and west,” the AMTI said in an article.

“The fishing vessels display all the hallmarks of belonging to China’s maritime militia, including having no gear in the water that would indicate fishing activity and disabling their Automatic Identification System (AIS) transceivers to hide their activities.”

AMTI noted that Thitu is only about 12 nautical miles (22 kilometers) from Subi Reef, one of the main places China has fortified in its recent buildup in the South China Sea.

The Philippines Foreign Ministry said on Thursday if the Chinese government didn’t repudiate the actions of the fishing vessels in the vicinity of Thitu, it would be assumed to have directed them.

“The presence of Chinese vessels within the (island group), whether military, fishing or other vessels, will thus continue to be the subject of appropriate action by the Philippines,” the statement said.

Duterte’s administration has made threats of military action against Chinese troops in the South China Sea before which have come to nothing. In May 2018, his foreign minister threatened “war” if Beijing attempted to access the oil and gas reportedly buried beneath the sea.

Melania Trump to Travel to Pennsylvania Ahead of Election Day

Melania Trump to Travel to Pennsylvania Ahead of Election Day