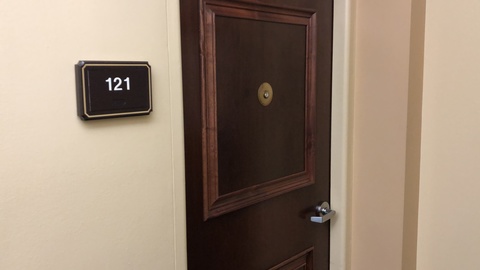 
‘Secret’ DMV office could be shut down, under plan from Kevin Kiley

California’s Department of Motor Vehicles operates a special office to assist lawmakers, Capitol staff members and constituents. It could soon be shut down if lawmakers support a bill from Assemblyman Kevin Kiley, R-Granite Bay.

California’s Department of Motor Vehicles operates a special office to assist lawmakers, Capitol staff members and constituents. It could soon be shut down if lawmakers support a bill from Assemblyman Kevin Kiley, R-Granite Bay.

It’s all but impossible to find for those who don’t know what they’re looking for.

Room 121 rests at the end of an isolated hallway across the street from the Capitol, is locked at all times and has no signage whatsoever. The only indicator of its existence is a peephole outside the front door.

The special Department of Motor Vehicles office is closed to the public, and if one Republican gets his way, it will be closed to the lawmakers and Capitol staff members using it.

“There’s a secret DMV across from the state Capitol with streamlined service that’s only available to members of the Legislature and a select group of political insiders,” said Republican Assemblyman Kevin Kiley of Granite Bay. “This is supposed to be a government of the people, by the people and for the people, not an oligarchy where a gilded political class enjoys privileges that aren’t available to the people that we represent.”

The three workers inside the office serve an important purpose, though. Despite perceptions that lawmakers flood into the office to renew their licenses and enjoy special perks, the vast majority of their time is spent addressing concerns from Californians who ask their state lawmakers for help sorting out their problems with the DMV.

While it wouldn’t comment on Assembly Bill 862, the DMV said in a statement the office “serves as a primary point of contact for more than 10,000 constituent services questions and concerns sent to legislative offices each year.”

The department added that about 90 percent of the work the staff does in the office “is related to assisting customers who have contacted their state representatives to resolve DMV issues.” Among many things, the employees review records, assist with license suspension issues and help customers make appointments.

Kiley’s proposal would prevent the DMV from operating any office that is closed to the public. He still wants the DMV to handle concerns lawmakers get from their constituents, but he wants the employees transferred from the “secret” office to DMV headquarters in Sacramento.

“We are closing down the office as much as it operates as a DMV field office,” Kiley said. “But in terms of fielding constituent concerns, that is a more general function that will continue to operate.”

Kiley is in the midst of a special election campaign against fellow Republican Assemblyman Brian Dahle for the Senate seat vacated by Board of Equalization member Ted Gaines. Their election is scheduled for June 4.

Even if the bill passes and the office closes, there’s nothing that would prevent lawmakers from accessing special DMV privileges. They’d still be able to make what some describe as “manager’s appointments,” which allows them to bypass long lines.

Still, these special appointments are mostly given to ordinary DMV customers who bring their concerns to lawmakers and staff members. Many lawmakers, including Kiley, Assemblyman Jim Patterson, R-Fresno, and Assemblyman Phil Ting, D-San Francisco, refuse to take advantage of the perks and instead choose to wait in regular DMV offices.