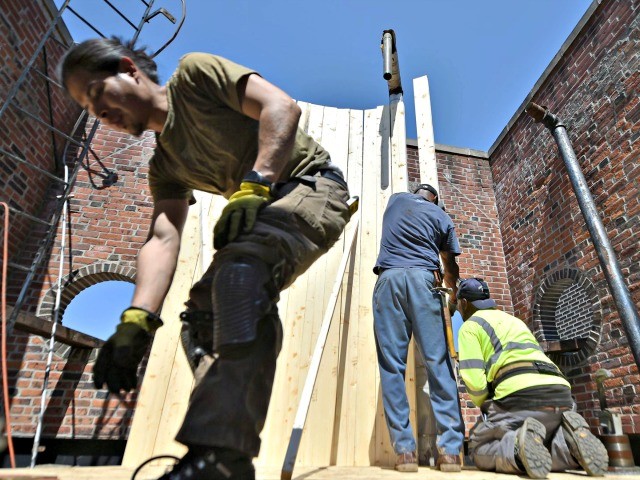 Specifically, in the U.S. construction industry, American workers enjoy a $25.34 average hourly wage today —  six percent more in wage earnings when compared to the year before.

The Times acknowledges the blue collar wage hike as “close to the steepest annual increase since the government started keeping track almost 30 years ago.”

Despite foreign-born residents accounting for about one-in-four construction workers in the U.S., as the Times noted, employers and business complain that more foreign workers are necessary to ensure that they do not have to compete for American workers by offering higher wages and better working conditions, and to keep their profit margins wide.

“The recent shortage of immigrant workers is impacting housing and housing affordability,” said Jerry Howard, chief executive of the National Association of Home Builders. Phil Crone, who runs the association’s Dallas chapter, said the labor bottleneck was adding about $6,000 to the cost of every home built in the area and delaying completion by two months. [Emphasis added]

The need for labor has set off a scramble for bodies that is spilling across industries and driving up wages. “A lot of our landscape companies are upset because their guys are coming into construction because they can earn more,” said Alan Hoffmann, who builds energy-efficient homes in Dallas. [Emphasis added]

“It is good for wages to go up, but if labor is at a point where employers can’t hire, it is reducing growth,” said Pia Orrenius, an economist with the Federal Reserve Bank of Dallas. “There’s also considerable wage pressure in small towns and cities that are depopulating, but that is a sign of distress, not of rising productivity.” [Emphasis added]

“Wage growth has picked up sharply in the bottom half of the wage distribution … The solid wage growth suggests a relatively optimistic outlook on consumption,” the analysis reported.

White House adviser Ivanka Trump has routinely touted the benefits to the working class of the president’s preferred low-immigration, higher-wage economy rather than the corporate interest and donor class’s preferred low wage economic model with endless illegal and legal immigration.

While wages continue to rise for America’s blue collar and working class, soaring levels of illegal immigration expected to the U.S. threaten wage gains for U.S. workers,as companies could enjoy a saturated labor market by the end of the year.

This year, between one to 1.5 million illegal aliens are expected to arrive in the country. Up to 500,000 of those nationals will cross the U.S.-Mexico border, undetected by Border Patrol, experts say and more than 400,000 may be released into the interior of the country by the end of the year at current Catch and Release rates.