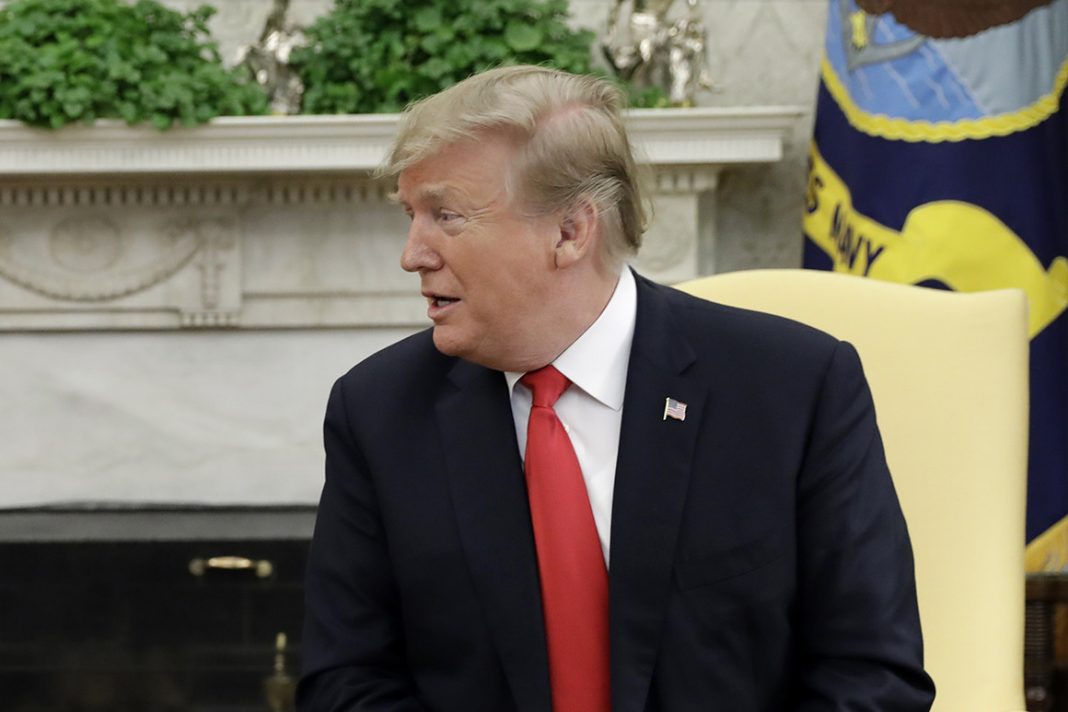 
President Donald Trump on Thursday backed off his threat to shut down the U.S.-Mexico border, marking his second major climbdown this week.

Talking to reporters in the White House, Trump said he would instead give Mexico a “one-year warning” to stop the flow of drugs into the United States and that he would first impose auto tariffs before closing the border.

The reversal comes after fellow Republicans, business groups and even some of his own aides warned him of dire economic consequences if Trump moved forward with his threat.

“The only thing frankly better, but less drastic than closing the border, is to tariff the cars coming in,” Trump said. “We’re going to give them a one-year warning and if the drugs don’t stop or largely stop, we’ll put tariffs on Mexico and products, in particular cars.”

Trump’s shift comes days after he said he would close the border as soon as this week if Mexican leaders were unable to stem the flow of migrants crossing into the U.S. He’s set to head to the southern border on Friday as his administration has sounded the alarm about a recent surge in migrants from Mexico and Central America arriving at the border in recent months.

The about-face is the second major one for Trump in a week — the president appeared to bow from public pressure earlier this week when he said he had decided to punt pushing any major health care legislation until after the 2020 election, despite his Justice Department supporting a lawsuit to dismantle the Affordable Care Act.

The president’s threat to shut the border down is one he’s long dangled over Mexico in an attempt to get them to capitulate to his demands on immigration and trade. But his warnings this week drew immediate backlash from lawmakers on both sides of the aisle, as well as the business community about the diplomatic and economic fallout of taking such a step.

On Monday, Trump said he was willing to take the risk of closing the border, effectively cutting off trade with one of the United States’ largest trading partners and shutting down an important international commerce hub.

“Sure, it will have a negative effect on the economy,” he told reporters at the time. “It’s a very big trading partner. But to me, trading is very important, the borders are very important, but security is what is most important. I mean we have to have security.”

In recent days his aides, including his top economic advisers Kevin Hassett and Larry Kudlow, have implored him to consider what the move would cost while elsewhere in the administration they have looked for ways to limit the impact while carrying out his request.

Trump appeared Thursday to have heeded those warnings, though he also claimed that his threats alone had paid off.

“So for the last four days, and you actually have covered it to a minor extent, Mexico has been capturing people and bringing them back to their countries at their southern border,” he said. “They’ve been taking people under their very powerful laws — they have the right to do it — and bringing them back to where they came from. That is about three days now, I guess, since frankly since they heard I was going to close the border.”

The White House has been adamant that Trump is not bluffing about shuttering the border, which the president reiterated Thursday.

“I will do it. You know I will do it, I don’t play games, I’ll do it,” he told reporters. But he suggested that tariffs would be a strong-enough motivator.

“Mexico understands that we’re going to close the border or I’m gonna tariff the cars — I’ll do one or the other, and probably start off with the tariffs, that’ll be a very powerful incentive.”