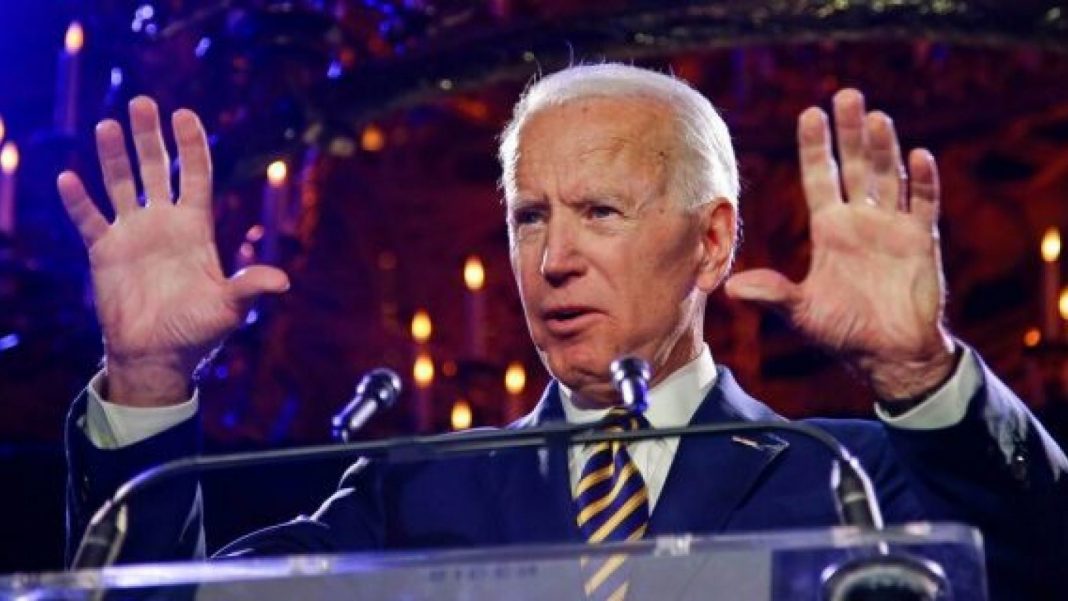 THREE MORE WOMEN ACCUSE BIDEN, SAY VIDEO ISN’T ENOUGH: If Joe Biden thought a video addressing the allegations of inappropriate behavior towards women would squash the scandal and enable him to focus on possibly launching his 2020 presidential campaign, he was mistaken … Hours after he appeared on video to promise he’d be “more mindful” about others’ personal space, three more women went public Wednesday to claim that the former vice president had touched them inappropriately. All three said Biden’s video didn’t go far enough.

A previous Biden accuser, writer D.J. Hill, told Fox News’ Shannon Bream on “Fox News @ Night” that she went public with her claim because she was inspired by other women who have come forward and the “cultural shift” that’s been “long overdue.” (Click on the video above to watch the full interview.)

A total of seven women have now accused Biden of inappropriate conduct.

SHOWDOWN OVER TRUMP’S TAXES BREWING: A key Democrat who heads the powerful House Ways and Means Committee has formally requested the IRS provide six years of President Trump’s personal and business tax returns and the president has responded, “Is that all? Usually it’s 10” … The request Wednesday by U.S. Rep. Richard Neal, D-Mass., who heads the tax-writing House Ways and Means Committee, is the first such demand for a sitting president’s tax information in 45 years. The move sets up a virtually certain legal showdown with the White House as Trump has refused the request, saying he is under audit.

VIRGINIA LT. GOVERNOR RELEASES POLYGRAPH RESULTS: Embattled Virginia Lt. Gov. Justin Fairfax on Wednesday released the results of a polygraph test he said he took in response to two accusations of sexual misconduct by two separate women … “Today, I am providing the full report of my polygraph examinations to the media so that all Virginians can read the report themselves,” he said in a news conference held in his office, WTKR-TV of Norfolk reported. Fairfax again denied the accusations, saying, “they are incredibly hurtful to me and my family and my reputation, which I have spent a lifetime building.” Fairfax’s two accusers, Vanessa Tyson and Meredith Watson, both spoke out in national interviews with Gayle King that aired on “CBS This Morning” earlier this week.

STACEY ABRAMS STILL NOT CONCEDING DEFEAT: Former Georgia gubernatorial candidate Stacey Abrams questioned the legitimacy of her 2018 loss during an event in New York City on Wednesday, saying she refuses to concede the race to Republican Gov. Brian Kemp, while accusing the GOP of stealing the election … “Despite the final tally and the inauguration [of Gov. Brian Kemp] and the situation we find ourselves in, I do have a very affirmative statement to make: We won,” she told the crowd at the annual convention of the Rev. Al Sharpton’s National Action Network. She lost to Kemp by more than 54,000 votes, but has repeatedly refused to concede the outcome.

LOUGHLIN, HUFFMAN MAKE COURT APPEARANCES: Hollywood actresses Lori Loughlin and Felicity Huffman appeared in Boston federal court Wednesday for hearings on their alleged roles in the college admissions scandal that outraged the nation a few weeks ago …. Neither Loughlin nor Huffman were asked to enter pleas in their respective cases and neither of them publicly addressed the allegations they face. Loughlin and her fashion designer husband, Mossimo Giannulli, are accused of paying bribes to get their two daughters into the University of Southern California. Huffman is accused of paying $15,000 disguised as a tax-deductible charitable donation so her daughter could take part in an apparently rigged college entrance exam.

A TUCKER APOLOGY – “Eskimo kisses aren’t rape. That used to be obvious. It’s not obvious anymore. And so we are sorry for helping to blur the distinction between human affection and coercive immoral behavior. The last thing this country needs is more people that think they are assaulted because a senior citizen hugs them wrong. So we apologize for adding to that nonsense and anti-human hysteria.”–Tucker Carlson, in his opening monologue on “Tucker Carlson Tonight,” reflecting on broader message of the allegations of inappropriate behavior with women with Joe Biden. (Click the image above to watch the full video.)

TODAY’S MUST-READS
Cal Thomas: Joe Biden suffers a political hit.
Howard Schultz: Federal debt is out of control, but no one is doing anything about it.
Samantha Bee knocks pro-life film ‘Unplanned,’ a surprise hit, as ‘mostly made-up’ propaganda.

Countdown to the Closing Bell with Liz Claman, 3 p.m. ET: A very special interview with John Krafcik, CEO of Waymo as Liz Claman takes a ride in a self-driving vehicle.

The Fox News Rundown podcast: “Howard Schultz Town Hall Preview” – In Part 2 of his interview with the podcast, Howard Schultz, former Starbucks chairman and CEO, looking past the critics as he explores a run for the White House. The Southeast Asian country of Brunei has implemented strict new Islamic laws that make gay sex and adultery punishable by death by stoning. Shahiran Shahrani, an openly gay man born and raised in Brunei but fled out of fear of persecution, tells his story. Plus, commentary by Judge Andrew Napolitano, Fox News senior judicial analyst.

The Brian Kilmeade Show, 9 a.m. ET: U.S. Sen. James Lankford, R-Okla., on the latest in the 2020 presidential race, the battle over health care and the subpoena over the Mueller report; Ken Starr, former Whitewater independent counsel, on opposition to the release of the Starr report in 1998 versus the controversy surrounding the Mueller report.

The Todd Starnes Show, Noon ET: Todd speaks with U.S. Rep. Paul Gosar, R-Ariz., about what President Trump needs to do at the U.S.-Mexico border.

#TheFlashback
1968: Martin Luther King Jr., 39, is shot and killed while standing on a balcony of the Lorraine Motel in Memphis, Tenn. Suspected gunman James Earl Ray later would plead guilty to assassinating King, but then spent the rest of his life claiming he’d been the victim of a setup.
1976: The film “All the President’s Men,” starring Robert Redford and Dustin Hoffman as Washington Post reporters Bob Woodward and Carl Bernstein, has its world premiere in Washington, D.C.
1983: The space shuttle Challenger roars into orbit on its maiden voyage.

Fox News First is compiled by Fox News’ Bryan Robinson. Thank you for joining us! Have a good day! We’ll see you in your inbox first thing Friday morning.