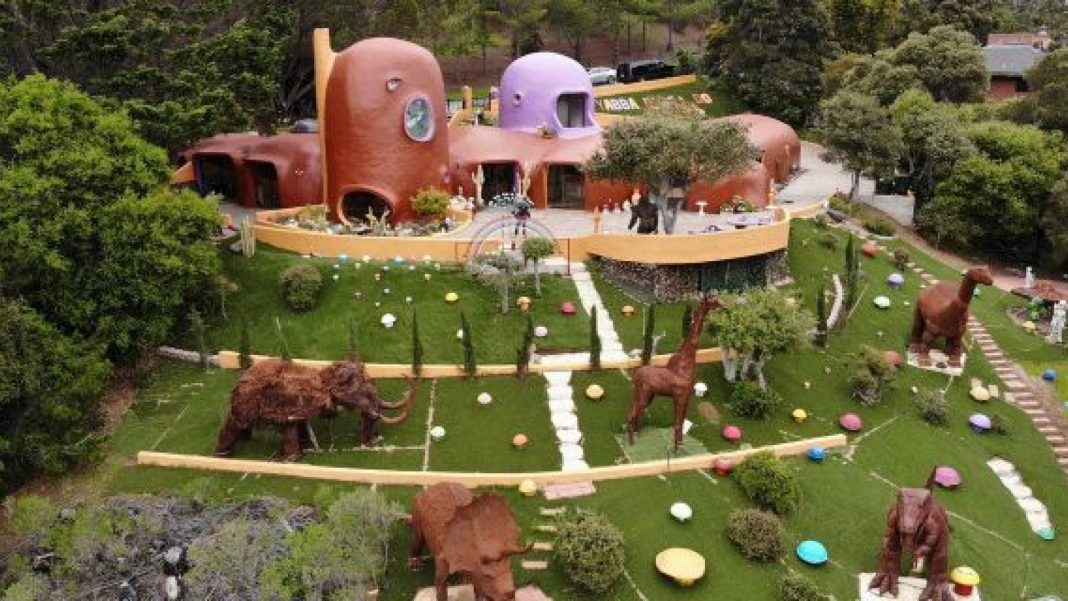 It’s a page right out of history.

The grounds of an unusual home in an elusive San Francisco suburb that pays homage to the “The Flintstones” family — complete with dinosaurs and a life-sized Fred Flintstone — has ended up in the middle of a legal fight between town officials and a property owner.

The house in Hillsborough that’s visible from Interstate 280 has featured the new addition of several dinosaurs to the garden, in addition to other sculptures that has drawn the ire of city officials due to the owner not getting required permits for the work.

“We don’t like it when people build things first, and then come in and demand or ask for permission later,” Assistant City Attorney Mark Hudak told KTVU last month. “That’s not fair to everyone else who goes through the process.”

The 2,730-square-foot house — currently painted red and purple with a giant “Yabba Dabba Do” sign near the driveway — was built in 1976. It was purchased by Florence Fang, a prominent philanthropist who once published the San Francisco Examiner, in June 2017 for $2.8 million.

Fang is not the “Wilma” of a modern stone-age family, however.

Fang, who doesn’t live in the home, instead uses it for entertainment purposes and charitable events.

The San Francisco Bay Area suburb of Hillsborough is suing the owner of the so-called Flintstone House, saying that she installed dangerous steps, dinosaurs and other Flintstone-era figurines without necessary permits.
(AP Photo/Terry Chea)

City officials said that Fang was given three stop work notices, a code violation citation, and then a hearing in front of an administrative panel made up of neighbors before a lawsuit was ultimately filed in March over unpermitted garden installations.

“If the lawsuit is successful, the judge will order her to remove the statues and the mushrooms and the Yabba Dabba Do sign,” Hudak told KTVU. “There are some other safety code violations that she needs to correct and the judge would order that as well.”

But an attorney for the 84-year-old told the Associated Press that snobby officials are after Fang’s constitutional right to enjoy her yard.

“Mrs. Fang has made people smile, she’s giving them joy. What’s not to love about Dino, who acts like a dog?” Angela Alioto, a former San Francisco supervisor, told the AP. “What is wrong with these people?”

While inviting reporters on a tour of the home this week, Alioto told the San Mateo Daily Journal the home is Fang’s “happy place.”

A San Francisco Bay Area town is suing Florence Fang, the owner of the quirky Flintstone House, alleging she violated local codes when she put dinosaur sculptures in the backyard and made other landscaping changes that caused local officials to declare it a public nuisance. AP Photo/Jeff Chi
(AP Photo/Jeff Chi)

“She’s had an incredible life and I think it’s wonderful that, at 84 years old, she has found something that makes her so happy,” she told the newspaper.

Alioto added that Fang plans to file a cross-complaint against city officials on April 11, saying her constitutional rights to free speech and religion were violated.

Tim Iglesias, a property professor at the University of San Francisco School of Law, told the AP that it was unusual for Fang to ignore 3 stop-work orders issued by the city. She also ignored an administrative order to remove the installations by Dec. 5, 2018, although she paid a $200 fine.

“This is a situation where a very wealthy, sophisticated homeowner has basically thumbed her nose at the city consistently,” he told the AP. “If they let her get away, then all the other wealthy people in Hillsborough can say, ‘Hey, I can do whatever I want with my property. Who cares about the planning department?'”