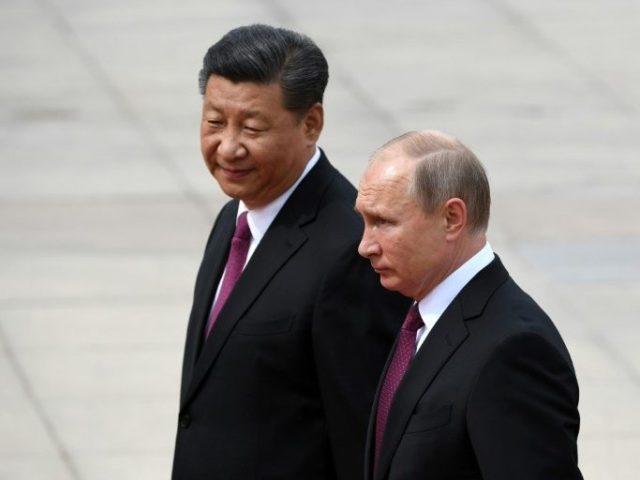 WASHINGTON, DC — America’s strategic adversaries Russia and China are trying to fill the power and security vacuum in the Middle East left behind by the United States by “exploiting the real and imagined U.S. absence for their own gains,” analysts testified before a House panel Wednesday.

The testimony before the House Foreign Affairs Subcommittee on the Middle East, North Africa, and International Terrorism came soon after several high-ranking U.S. officials warned about increasing cooperation between China and Russia, noting that the partnership represents a significant threat to the United States.

Elisa Catalano Ewers from the Center for a New American Security bipartisan think-tank noted in her written testimony that the perception in the Middle East over the last decade has been that the U.S. is withdrawing from its interests and presence in the region, adding:

Consistent with geo-strategic changes, great power competition has also flourished in the region. China finds in the region a receptive environment for its economic policies while Russia finds room to pursue a multi-pronged strategy that strengthens its overall hand by filling gaps left by the United States.

Each offers an alternative model to regional players as compared to the U.S.: no strings attached cooperation that don’t require them to align with values or make any changes in the way they conduct themselves domestically or internationally.

While neither Russia nor China can match U.S. traditional presence or influence in the short-term, both are exploiting the real and imagined U.S. absence for their own gains. Russia has re-engaged on military cooperation and diplomatic mediation beyond Syria to Egypt, Libya, and of course Israel and the Gulf. And China continues to pursue its Belt and Road Initiative [BRI] throughout the region alongside modest forays into the security space.

Daniel Benaim from the liberal Center for American Progress think-tank added in his written testimony:

Great power competition is also returning [to the Middle East]. Russia aims to build on rescuing Syrian President Bashar al-Assad to make a bid for regional leadership as a counterweight to America. China, too, is deepening its investments and pledging billions in loans and aid. Both countries have joined several regional powers in jockeying for footholds across the Red Sea in the Horn of Africa.

U.S. President Donald Trump has scheduled the withdrawal of most of the 2,000 American troops in Syria, a move that some experts believe will help Russia achieve its goal of asserting itself as a major superpower in the region and boost Iran’s influence.

Support from Iran and Russia has allowed dictator Bashar al-Assad to remain in office despite U.S. opposition. Assad now controls more territory in Syria than any other warring party, including the American-backed Syrian Kurds.

The Trump administration is expected to leave behind a “residual” force in Syria to ensure the lasting defeat of the Islamic State (ISIS/ISIL) and combat Iran, which continues to operate in the country along with its narco-terrorist proxy Hezbollah.

Moreover, nearly 5,000 American troops will remain in neighboring Iraq with the ability to go into Syria if necessary.

Earlier this year, Gen. Joseph Votel, the top U.S. commander in the Middle East, cautioned that China may be using its BRI endeavor to “support and mask” its military objectives as it continues to try to “displace” the United States and expand its influence in the Middle East and Afghanistan.

Both China and Russia have a military presence in Syria in support of dictator Assad. China has expressed concerns about the return of Chinese Uighur [or Uyghur] Muslims who traveled to join jihadis amid the Islamic State’s (ISIS/ISIL) rise across Iraq and Syria in 2014.

Beijing and Moscow will try to fill the potential void in the Middle East left behind by the upcoming U.S. withdrawal in Syria, Votel asserted.

Echoing the U.S. military and intelligence community, Secretary of State Mike Pompeo warned last week of the increasing cooperation between Russia and China in Venezuela and beyond, telling a House panel:

We have seen Russia and China begin to work together in ways that they hadn’t done 15, 20 years ago. That’s a trouble spot that’s been happening for a couple of years now. They’ve just found themselves in places where they have overlapping interests. They have strategic challenges between the two countries. …I don’t believe they’ll ever truly overlap, but certainly tactically and operationally. …Almost always [China and Russia stand] against freedom, democracy, and liberty, the things that the United States and democracies hold dear.

Under Trump, the U.S. military is prioritizing efforts against strategic competitors Russia and China over the war on terror. Both U.S. rivals are operating in the Middle East, Gen. Votel told lawmakers.