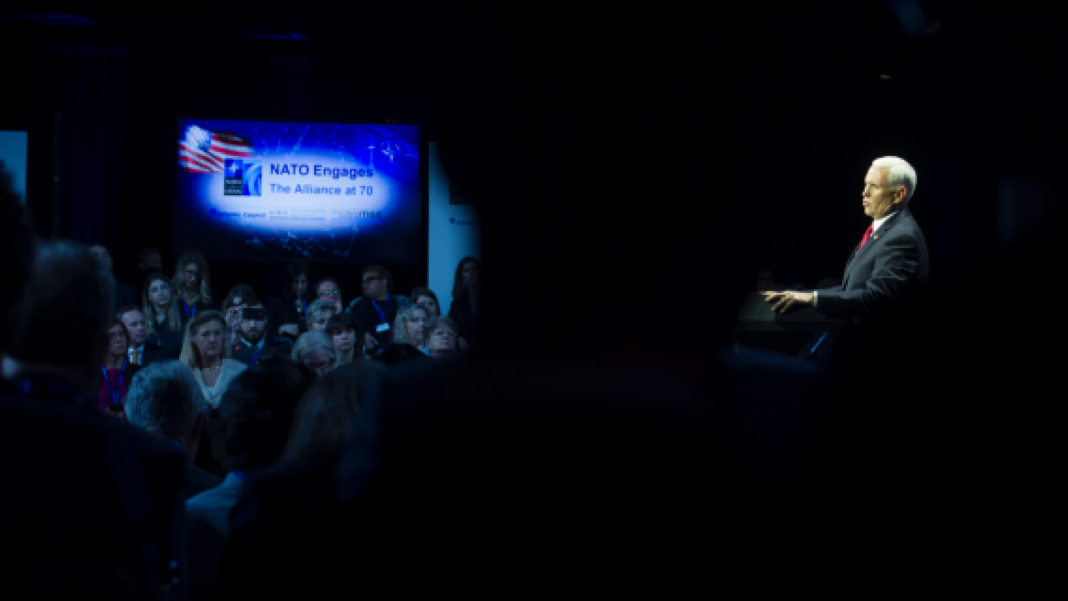 WASHINGTON – Vice President Mike Pence warned Turkey on Wednesday that it could risk its membership in NATO if it goes ahead with plans to buy a Russian air defense system despite widespread U.S. and international opposition.

Pence’s escalating rhetoric came after Turkey insisted Wednesday that the Russian deal was done, signaling an apparent impasse between the two NATO allies.

Speaking at a NATO 70th anniversary event, Pence said Turkey risks expulsion from the F-35 Joint Strike Fighter program, which could cripple Turkish manufacturers who are making parts for the aircraft. And he raised the possibility of much broader recriminations.

“Turkey must choose,” Pence said. “Does it want to remain a critical partner in the most successful military alliance in the history of the world or does it want to risk the security of that partnership by making reckless decisions that undermine our alliance?”

Other U.S. officials have stopped short of threatening Turkey’s underlying relationship with America or NATO, but there have been growing calls for swift action, including sanctions, against Ankara to stop the S-400 purchase.

Turkey’s foreign minister, however, appeared unmoved by the U.S. threats, saying that buying the Russian S-400 system “is a done deal. We will not step back from this.”

The U.S. has offered to sell Turkey the American-made Patriot missile defense system, but Foreign Minister Mevlut Cavusoglu said it could not be delivered in time.

“We couldn’t get it for 10 years,” Cavusoglu said at the Atlantic Council on Wednesday morning. “That’s why we had to buy from Russia. And we tried to buy from other allies as well. It didn’t work. So it is an urgent need of Turkey. I mean, we need air defense systems urgently in Turkey.”

Cavusoglu also met Wednesday with U.S. Secretary of State Mike Pompeo and leaders of the House Foreign Affairs Committee, whose Democratic chairman and ranking Republican member said they “made clear our bipartisan opposition” to Turkey’s plan to acquire the Russian missile system. Rep. Eliot Engel, D-N.Y., and Rep. Michael McCaul, R-Texas, said they cautioned Cavusoglu that deepening ties with Moscow “will risk sanctions and Turkey’s involvement in the F-35 program.”

The U.S. and other NATO allies have repeatedly complained about the purchase of the S-400 system, saying it is not compatible with other allied systems and would represent a threat to the F-35. Officials have said that Turkey’s acquisition of both U.S. and Russian systems could give Moscow access to sophisticated American technology and allow it to find ways to counter the F-35.

Pence described the purchase as “deeply troubling” and said it “poses great danger to NATO, to the strength of the alliance.”

As a result, U.S. government leaders have repeatedly threatened to shut down Turkey’s participation in the F-35 program if the Russian purchase goes through.

On Monday, the Pentagon took its first retaliatory step and stopped delivery of F-35 fighter jet parts and manuals to Turkey.

But so far, Turkish pilots continue to train on the aircraft at Luke Air Force Base, outside Phoenix, Arizona. And, Pentagon leaders insist there is still hope for some type of negotiated settlement.

“We haven’t given up on trying to work our way through this,” said Gen. Joseph Dunford, chairman of the Joint Chiefs of Staff. “We’ve made what we think is a very good offer for the Patriot to provide for the air defense capabilities of Turkey.”

He told reporters that the U.S. has made it clear to Turkey that the F-35 and the S-400 are incompatible systems, “but we’re still working our way through that and hope we can come up with an arrangement.”

Acting Defense Secretary Patrick Shanahan also expressed optimism, saying he is confident that the Patriot system proposal will work out.

Cavusoglu, however, said he believes Turkey can convince the U.S. that the S-400 will not be a risk or threat to NATO.

“We made very clear that this system will not see any NATO system, including F-35s, as an enemy,” he said, adding that Turkey has proposed setting up a technical working group that would make sure the S-400 did not pose a threat.

How Instagrammers Are Faking the Luxury of a Private Jet for...