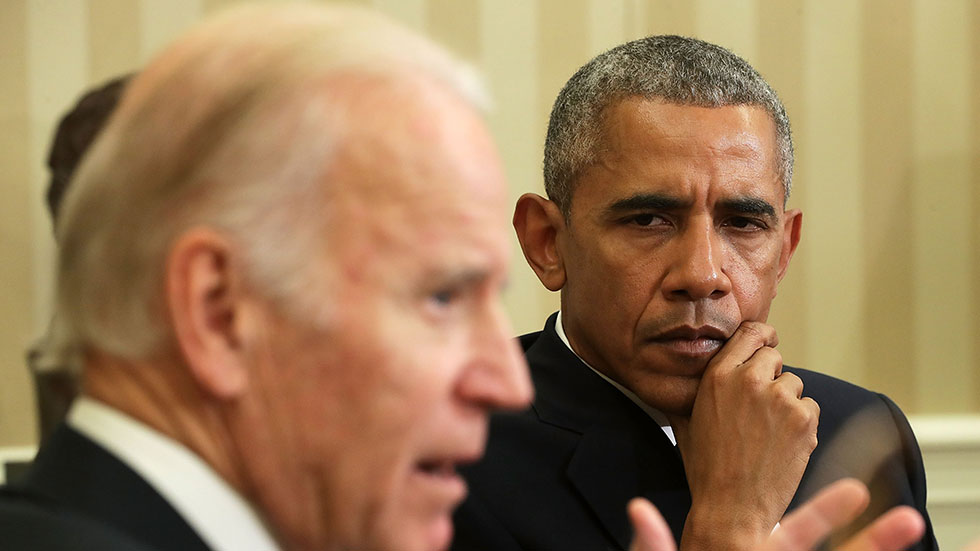 As Joe BidenJoseph (Joe) Robinette BidenThree more women come forward with allegations against Biden after pledge to change behavior Steve King defends Biden: He’s ‘just an affectionate guy’ Buttigieg on Biden allegations: ‘Not a bad thing’ everyone is being held to ‘very high standard’ MORE’s allies raced to defend the former vice president in the face of a mounting political crisis, one voice has remained silent: former President Barack Obama

People close to the former president say that he is standing behind Biden amid allegations from seven women that the former vice president made them uncomfortable by touching them inappropriately at public events.

“President Obama thinks the world of him and thinks he’d be an excellent president,” one source close to Obama who has spoken to him in recent weeks told The Hill.

“He’s spent an infinite amount of time talking about his character, and they remain in touch and good friends,” the source said.

But Obama has so far refrained from weighing in on news events, much less the emerging Democratic presidential primary contest, those close to him noted, leaving it unclear whether the current controversy surrounding Biden could be an exception.

“President Obama is not going to be weighing in on the primary and the day-to-day stories around it,” the source said. “And Joe Biden would be the first to tell you that he’ll have to earn the nomination on his own.”

Biden sought to head off the growing controversy on Wednesday, posting a video message online in which he pledged to “be more mindful and respectful of people’s personal space.”

In that video, he also rebuffed criticism that he is out of step with modern social norms, insisting that he would “adjust” to those expectations.

“The idea that I can’t adjust to the fact that personal space is important — more important than it’s ever been — is just not thinkable,” Biden said. “I will. I will.”

A number of Obama’s former aides and advisers have already spoken out on Biden’s behalf in the wake of the allegations.

Susan Rice, Obama’s former national security adviser, wrote on Twitter this week that while Biden is “warm and affectionate” with both women and men, she had never found his behavior to be “inappropriate or uncomfortable.”

Jennifer Palmieri, a former senior adviser to Obama, applauded the video message posted by Biden on Wednesday in which he vowed to be more mindful of people’s personal space, saying that the former vice president’s words were “heartfelt” and the “best thing he could do to help himself in this moment.”

And in a recent interview with NPR, Valerie Jarrett, a former senior adviser to Obama, said that while Biden has been “extraordinarily demonstrative to both men and women alike,” she never interpreted his behavior “as a sexual advance in any way.”

“I had the honor of working with Joe Biden every single day for eight years, and I have an enormous amount of respect for him,” Jarrett said.

But Obama remains one of the Democratic Party’s most popular and beloved figures, and some Biden supporters believe that a vote of confidence from the former president would likely go a long way in reassuring many Democrats who worry that the allegations will taint Biden’s expected presidential run before it even begins.

The allegations against Biden began emerging last Friday when Lucy Flores, a former Nevada state assemblywoman and candidate for state lieutenant governor, posted an essay on the fashion and lifestyle website The Cut in which she accused Biden of touching her shoulders and kissing the back of her head during a campaign rally in 2014.

Since then, six other women have come forward with accounts of interactions with Biden that they said made them feel uncomfortable.

Despite the emerging allegations, sources close to Biden have signaled they are set to launch a presidential campaign after Easter. One Democratic source said that Biden’s team hasn’t slowed down its preparations in the face of the controversy.

“It’s full steam ahead from everything I’ve been told,” the source said. “The video yesterday was kind of his last response to it and there hasn’t been any slowing down in prepping for an announcement.”

But the controversy has still put the prospective 2020 hopeful on the defensive at a time when he would rather be generating excitement for his campaign-in-waiting.

As Biden battled the various allegations this week, the former president has been in Europe, where he hasn’t held public events. As part of the work on his foundation, Obama is slated to hold a town hall event with emerging European leaders in Berlin on Saturday, raising the possibility that he could be asked about the matter.

Two weeks ago, at a sold-out event in Canada, Obama praised his vice president.

“He complemented me,” Obama said. “He looked at the world and approached certain problems with a different set of experiences. But he had integrity, and he is a big-hearted person and a loyal person. And we shared a common set of values.”

Obama has generally sought to stay out of the news cycle since leaving office.

And while he has occasionally weighed in publicly on certain topics — health care policy or last year’s mass shooting in Parkland, Fla., for example — another person close to the former president said that he does not want to influence public opinion on controversial topics.

“He tends to not want to shape public opinion on this sort of thing, which is a juxtaposition to our current president who is all about this,” the source said, referring to President Trump

“He realizes that he breathes so much air into every situation,” the source added. “And I think he realizes that he would have to walk a bit of a fine line on this. Anything he says would cut against Joe Biden.”