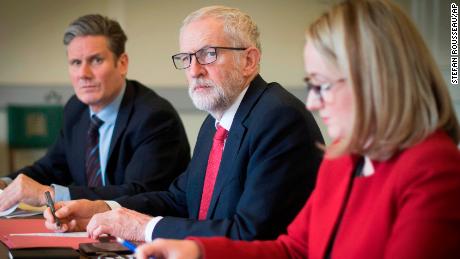 By the narrowest of margins, the House of Commons voted in favor of legislation which forces the UK government to request another extension to the Brexit process. The bill, which passed by 313 votes to 312, seeks to prevent Prime Minister Theresa May yanking the UK out of the European Union without an agreed deal.

It came as the May’s Conservative party descended into civil war over her strategy.

Two ministers resigned from May’s government in protest at her efforts to seek a compromise with the opposition leader, Jeremy Corbyn. One of her most senior ministers warned that a long extension to the Brexit process was inevitable.

Senior figures in both main parties raised the prospect of a second referendum to obtain the British public’s backing for any deal — and to offer the choice of remaining in the EU.

In a dramatic vote that came at almost midnight in London, lawmakers in the House of Commons passed legislation requiring the British government to ask the EU for another extension to the Article 50 process, the legal mechanism by which the UK is leaving the bloc. Britain is currently due to depart on April 12, but many observers doubt that May will be able to secure backing for her withdrawal deal by then.

The EU said it would be open to an extension. But it would likely have to be a long delay, requiring the UK to take part in elections to the European Parliament on May 23, a move that May has bitterly opposed. The legislation must now be approved by the House of Lords, a near certainty, in the next few days.

In the most significant development of the day, May held talks at her office in the House of Commons with Corbyn and his senior aides. He described the talks “useful but inconclusive,” and said there would be further discussions on Thursday. May had not shifted her position as much as he would have hoped, Corbyn added.

Downing Street said: “Today’s talks were constructive, with both sides showing flexibility and a commitment to bring the current Brexit uncertainty to a close.”

The strategy provoked fury in her own party. Many hardline Conservatives fear she will be forced to seek a “softer” Brexit — one that would result in closer ties to the European Union than she had previously countenanced.

Chris Heaton-Harris, who served as a junior minister in the Department for Exiting the European Union, said in his resignation letter that May’s decision to rule out leaving the EU without a deal made his job irrelevant.

Nigel Adams, former Wales minister, described Corbyn as a “Marxist” in his resignation letter and said it was a “grave error” to hold talks with him. “It is clear that we will now end up in the Customs Union. That is not the Brexit my constituents were promised, and it is contrary to the pledge we made in our manifesto,” Adams wrote.

May attacked from her own side

In a marathon session of Prime Minister’s Questions, May was buffeted by hostile interventions from her own MPs. “Why is a Conservative prime minister, who repeatedly told us that no deal is better than a bad deal, now approaching Labour MPs to blockade WTO Brexit when most Conservative MPs want us to leave the European Union with a clean break in nine days time,” Conservative MP Julian Lewis asked.

Another Conservative lawmaker, Lee Rowley, described Corbyn as “the biggest threat to our standing in the world, our defense and to our economy.”

Nick Boles, the former Conservative MP who dramatically quit his party on Monday after his plan for a softer Brexit was voted down in the Commons, launched a tirade against May’s director of communications, Robbie Gibb, saying he was plotting to undermine the Prime Minister’s efforts to find a compromise with Corbyn.

“The PM’s head of communications Robbie Gibb is a hard Brexiter who wants to destroy the PM’s new search for a cross party compromise,” he wrote on Twitter. “The Prime Minister would do well to tell Mr Gibb to get back in his box — or go back to the BBC,” Boles added, referring to Gibb’s former employer.

Chancellor Philip Hammond, a senior member of May’s Cabinet, said Parliament should vote on whether to hold a second referendum — a position previously ruled out by May. “It is a perfectly credible proposition that deserves to be tested in Parliament,” Hammond told ITV.

Any further delay to Brexit will inevitably be long and the UK will have to prepare to hold European elections if it is sought, he said.

There were signs of divisions in Labour, too. A senior member of Corbyn’s team urged him to seek a second referendum as part of any deal with the Prime Minister. Emily Thornberry, the shadow foreign secretary, wrote to all Labour MPs saying that any pact with May should include a public vote.

“If we look like reaching any other decision than confirmatory vote that would be in breach of the decision made unanimously” during the Labour Party conference in Liverpool last year, she wrote. Some Corbyn allies believe a second referendum would alienate Labour supporters who had voted to leave in the 2016 referendum.

May received a boost when a move by some lawmakers to take control of business in the House of Commons for a third round of votes on Brexit options was blocked. Members of Parliament were tied 310-310 on whether to hold the so-called indicative votes on Monday. John Bercow, the Speaker, cast his deciding vote to oppose the move.

It was the first time in 26 year that the Speaker was forced to break a tie. “It’s not for the chair to create a majority that doesn’t exist,” Bercow said. Ironically the last time a Speaker broke a tie was in relation to another controversial European issue — the Maastricht Treaty, which bound the European Union more closely together in the early 1990s.