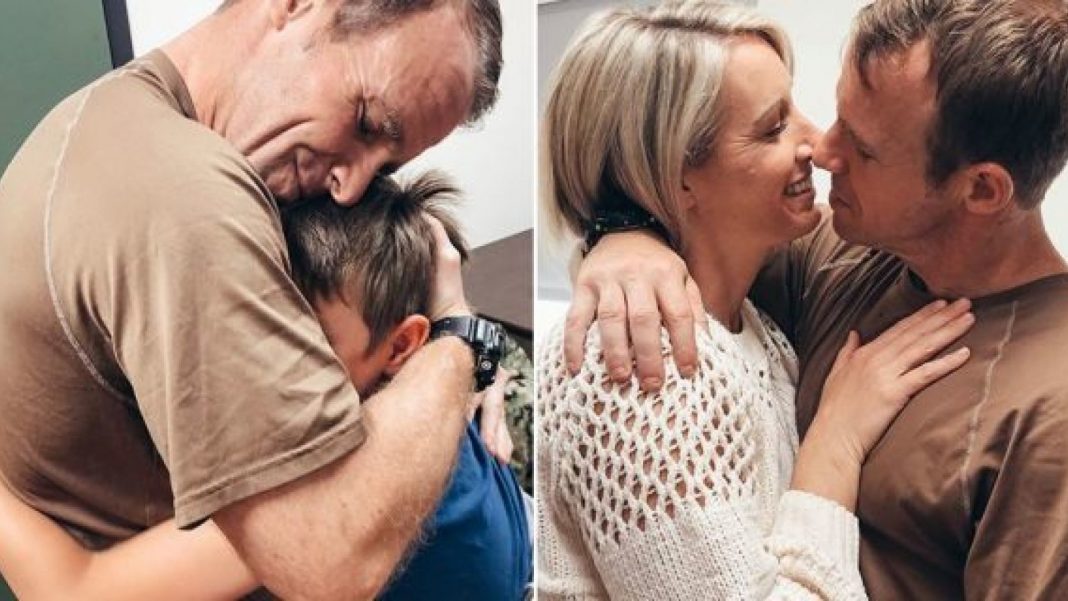 Navy SEAL Eddie Gallagher, who is facing a war crimes trial, has been reunited with his family following his relocation from a Navy brig in California.
(Courtesy Gallagher Family)

The decorated U.S. Navy SEAL facing a war crimes trial is “extremely happy to be out” of the brig he was being held in since September, a California House Republican says, and the SEAL’s family has been posting pictures of the first time they were allowed to see him in months.

Rep. Duncan Hunter’s comments on the Brian Kilmeade Show this week come days after President Trump announced that Eddie Gallagher would be moved to “less restrictive confinement” ahead of the SEAL’s May 28 court date. Gallagher is accused of killing an injured ISIS prisoner of war in Iraq, amongst other charges, and was relocated this weekend from the brig to the barracks at U.S. Marine Corps Air Station Miramar, just outside of San Diego.

“When I saw him he was kind of out of it. Imagine being in a jail, being treated pretty harshly with a bunch of bad people, sex offender-type people and now you are out,” Hunter said. “He was just extremely happy to be out.”

Hunter told Kilmeade that Gallagher is now allowed to see his family, go to a Denny’s restaurant on the base and even hit golf balls at its driving range.

But Gallagher’s family has accused staff at the Miramar brig of treating him improperly while he was there. Last month, 18 House Republicans wrote in a letter to the Secretary of the Navy that they have “received reports that Chief Gallagher’s access to counsel and access to food and medical care may have been restricted.”

Hunter, in his interview this week, warned the Navy that he is keeping a close watch on what is happening at the barracks – and will report his findings to Trump and the American public.

“We have guys going to see Eddie almost every other day in San Diego,” he said. “So we are detailing what they are doing to him…but we got him out of the brig.”

Hunter, who joined the Marine Corps after the September 11 attacks and has served in Iraq, like Gallagher, believes prosecutors in the Justice Department and U.S. military “want wins” and are “very vindictive.” Hunter also said he thinks they might be trying to retaliate against Gallagher now that the president has taken an interest in the case.

“This takes moral courage to look the military in the eye and say ‘hey, you guys are wrong, I’m the commander in chief, I’m making a decision,’” Hunter told the radio program. “You won’t see many presidents that will step out of line like this and do the right thing for the right reasons when you have the entire military establishment and broken system trying to retaliate.

“They are going to take it out on Eddie and we’re going to document that and make sure that the president sees it, and that the American people see it if they do it,” he added.

Gallagher’s family, on a Facebook page that has been posting updates about the case, says the move from the brig to the barracks allows him “to receive the medical care he needs and deserves, and also the opportunity to adequately and fully prepare for his trial with his legal team.”

“Family means everything to us,” his wife, Andrea, wrote in a message posted on Wednesday night. “After 8 combat deployments over the past 15 years, we cherish every waking moment we have together. This is why we’re so incredibly grateful that President Trump exercised true leadership in granting us time together as we fight the battle of our lives against false charges.”