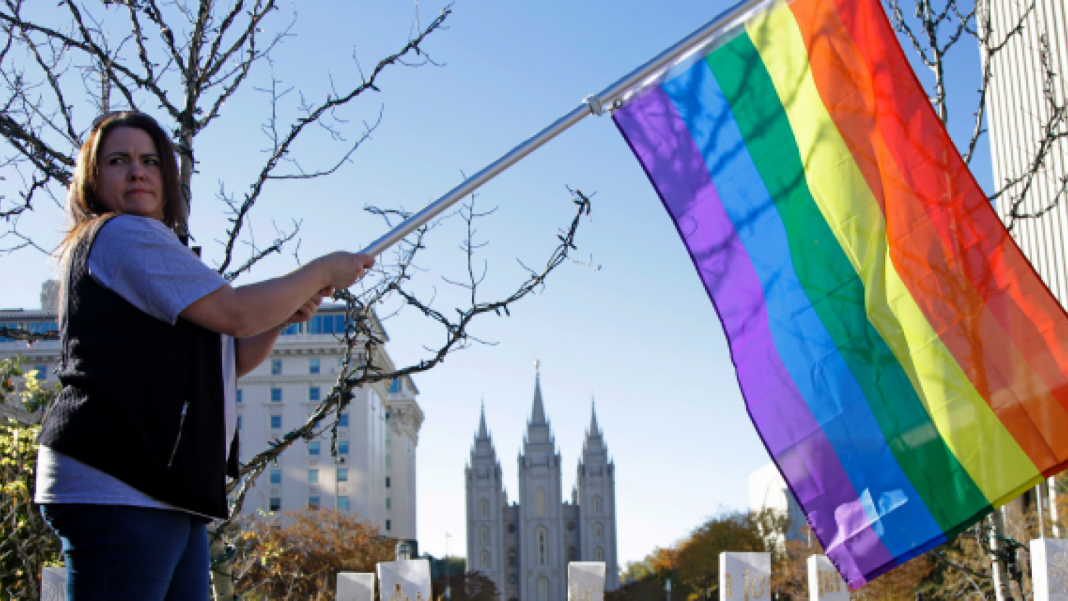 FILE – In this Nov. 14, 2015 file photo, Sandy Newcomb poses for a photograph with a rainbow flag as people gather for a mass resignation from The Church of Jesus Christ of Latter-day Saints in Salt Lake City. The Church of Jesus Christ of Latter-day Saints is repealing rules unveiled in 2015 that banned baptisms for children of gay parents and made gay marriage a sin worthy of expulsion. The surprise announcement Thursday, April 4, 2019, by the faith widely known as the Mormon church reverses rules that triggered widespread condemations from LGBTQ members and their allies. (AP Photo/Rick Bowmer, File)

SALT LAKE CITY – The Church of Jesus Christ of Latter-day Saints on Thursday repealed rules that banned baptisms for children of gay parents and that labeled same-sex couples as sinners eligible for expulsion — marking a reversal of policies condemned as jarring detours from a push by the faith to be more compassionate about LGBTQ issues.

LGBTQ church members and groups that support them expressed relief about what they called an important step forward for the faith. However, they also said they were angry about the harm the 2015 policies had caused and the lack of an apology by church leaders.

In a statement posted online, church leaders described the changes as “very positive policies” that should help “affected families.” The faith’s highest leadership group, known as the First Presidency, made the decision after “fervent, united prayer to understand the will of the Lord on these matters,” the statement said.

The faith widely known as the Mormon church said it is not changing its doctrinal opposition to gay marriage and still considers same-sex relationships to be a “serious transgression.”

“We want to reduce the hate and contention so common today,” the statement said.

The rules approved by global church leaders in 2015 had prohibited baptisms for children living with gay parents until the children turned 18 and disavowed same-sex relationships.

With the change, children of gay parents can now be baptized as long as their parents approve the baptisms and acknowledge that the children will be taught church doctrine.

People in same-sex relationships will no longer be considered “apostates,” a term the religion uses for people who teach inaccurate doctrine or publicly defy guidance from church leaders. Apostates can be kicked out of the religion.

That label was widely condemned by LGBQT members and allies as being demeaning and hurtful to people who already struggle to find acceptance in the faith.

“It was a stigma. It was like wearing a Scarlet letter,” said Nathan Kitchen, a gay Mormon father of five children from Gilbert, Arizona. “You are cut off, you are a pariah.”

Kitchen said he cried when he heard the news about the new policies. Kitchen, also the president of an organization called Affirmation that supports LGBTQ church members, said the old policies had fueled painful custody battles as straight parents tried to ensure their children could be full members of the faith.

Wendy Montgomery, an Arizona mother of a gay son, said she’s pleased the rules have been changed but believes the harm caused by the previous policies can’t be undone. The lifelong church member left the religion after the 2015 policy was instituted.

“It deeply wounded and traumatized every single LGBQT Mormon that I know,” said Montgomery, a member of a mothers group called “Mama Dragons” that advocates for parents with LGTBQ members of the faith.

The announcement came two days before Saturday’s twice-yearly church conference in Salt Lake City. It was unclear if church leaders will speak more about the changes during speeches at the conference.

Erika Munson, co-founder of the Mormons Building Bridges LGBTQ advocacy group, said there’s a “great feeling of being heard” because the changes came after an outcry from church members.

“We saw the church correct a mistake in record time,” Munson said. “Usually these things take maybe 100 years or more.”

The move undoes the one major detour from a decade-long path by the faith toward more compassion on LGBTQ issues while sticking to doctrinal opposition of intimacy between people in same-sex relationships, said Patrick Mason, a religion professor at Claremont Graduate University in California who studies the faith.

The policy seemed to harm the church image and touched a nerve with liberal members and conservative, orthodox members, he said.

“That policy always seemed out of step,” Mason said.

Membership growth in the religion has stagnated in recent years, and young members opposed the policies at much higher rates than older members, said Jana Riess, who surveyed members of the religion for her book, “The Next Mormons: How Millennials Are Changing the LDS Church.”

Faith leaders had previously explained that the 2015 rules were designed to protect children by not putting them in a potential tug-of-war between the beliefs of same-sex couples raising them and teachings and activities at church.

Church President Russell M. Nelson, then a member of a governing body that helps the president lead the church, defended the policy in a 2016 speech in which he said a revelation received by then-President Thomas S. Monson and other leaders gave them “spiritual confirmation” that the rules were the right thing to do after many states legalized gay marriage.

The speed at which church leaders and Nelson in particular changed course on the issue was rare and surprising, said Matthew Bowman, an associate professor of history at Henderson State University in Arkadelphia, Arkansas, who studies the faith.

“It seems to indicate that ultimately they decided it was doing more harm than good,” Bowman said.