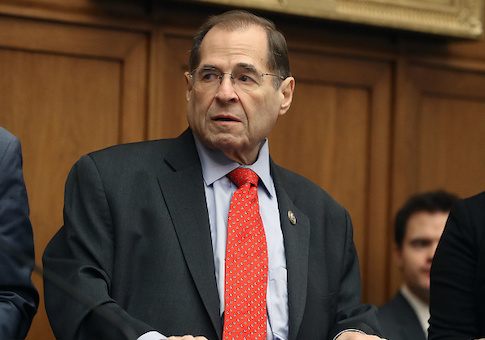 AUSTIN—The largest donors on the left will be given a private briefing on investigations into President Donald Trump by House Judiciary Committee chairman Jerrold Nadler (N.Y.) during a secretive Texas gathering this week, according to documents obtained exclusively by the Washington Free Beacon.

The Democracy Alliance, a group of millionaire and billionaire funders of the liberal movement, is holding its Spring Partner Retreat and Strategy Conference at the Four Seasons hotel in Austin, where security has been patrolling the meeting areas since Wednesday. As always at the group’s secretive meetings, all programming is off the record and closed to members of the media.

Nadler, who has made headlines by leading the charge to investigate Trump in the House, was a late addition to the conference program, which was obtained by the Washington Free Beacon and can be viewed in full below.

Nadler will join the donors via live video to lead a discussion titled, “After the Mueller Report: What’s Next?”

“Given the events of the last few days, we added a special discussion, After the Mueller Report: What’s Next?” says a flyer distributed with programming updates for the donor retreat.

Center for American Progress president Neera Tanden will join Nadler for the discussion. They will bring donors “up to date on where we stand in the myriad investigations into Trump’s corruption and abuses of power.” A Thursday morning yoga class was also added to the program, the flyer says.

This is not the first time Democracy Alliance partners, who each pledge to give at least $200,000 annually to liberal organizations, have been treated with closed-door briefings from powerful members of Congress. At the group’s November 2018 conference, the Washington Free Beacon revealed a partners-only briefing from Rep. Adam Schiff (D., Calif.), who was set to become House Intelligence Committee chairman.

Democracy Alliance Spring 2… by on Scribd

The Austin gathering is smaller than Democracy Alliance retreats in the past, with organizers deciding to hold a more “partner-centric” event, the agenda explains.

“There are fewer faces around because many of you asked for the opportunity for more intimate strategic conversations with other donors, and we hope the format of this Partner-centric retreat will allow for a deeper dialogue and focused debate on the critical work that lies ahead,” Democracy Alliance president Gara LaMarche and chair John Stocks explain in a welcome letter for the conference.

The more critical work ahead for the donor group is defeating Trump in 2020, they explain, and also making investments to “build progressive political power and sustain it.”

“Our conversation here in Austin will focus on understanding the critical role that the DA must play in the short term to lay a foundation for 2020 victories and make the long-term, multi-year investments to build progressive political power and sustain it,” they write. “We know that the next election is of overriding importance, so we are dedicating Thursday morning to all things 2020 and welcome policy experts and political strategists to discuss with us what it takes to defeat Trump.”

Additional conference materials indicate the group plans to inject nearly $300 million into liberal infrastructure to prepare for the 2020 elections.

The keynote speaker at the Democracy Alliance Partner Dinner on Thursday night will be failed Florida gubernatorial candidate Andrew Gillum, described as “a long friend of the DA and one of the brightest progressive stars.”

Also given a platform during the conference is Virginia delegate Kathy Tran, who gained national attention earlier this year for introducing legislation that would allow abortions through and even beyond the third trimester of a pregnancy.

On Friday, much of the programming is dedicated to the conference host site of Texas, with an afternoon event, “Bigger than Beto: Turning Texas Blue,” moderated by DA president Gara Lamarche.

The Democracy Alliance, formed in 2005, helps set the Democratic agenda, and its members have combined to pour south of half a billion dollars into the progressive infrastructure and liberal groups and organizations. Billionaire financier George Soros is a prominent member of the secretive group and representatives from his Open Society Foundations are on site for the group’s Spring 2019 gathering.

Prominent Democratic politicians and figures have also been tied to the Democracy Alliance.

Current presidential candidates Sen. Kamala Harris (D., Calif.) and Amy Klobuchar (D., Minn.) delivered video messages to the group during its California retreat in 2017, documents previously obtained by the Free Beacon showed. Then-minority leader Nancy Pelosi (Calif.) was on site at the same retreat to give a speech alongside Soros. Other representatives, such as Maxine Waters (Calif.), were also spotted at the resort mingling with the prominent donors.

Democratic National Committee chairman Tom Perez, along with staffers of the committee, were heavily involved with the group’s spring retreat in Atlanta last year.

Neither Nadler nor a spokesman for the House Judiciary Committee responded to an inquiry on his donor briefing.