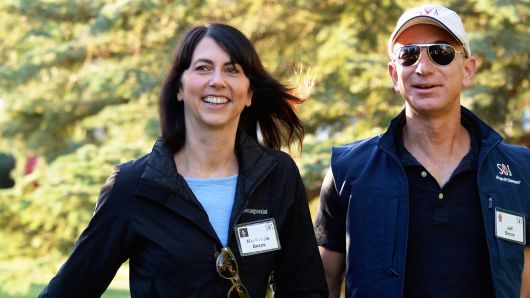 MacKenzie Bezos announced on Twitter on Thursday that she and Jeff Bezos have completed the process of dissolving their marriage, leaving her with $35.6 billion in Amazon stock.

MacKenzie Bezos said she was “happy” to be giving her ex-husband 75 percent of their stock in Amazon along with voting control of her shares. She also relinquished to him all of her interests in The Washington Post and the Blue Origin aerospace company.

According to a filing with the Securities and Exchange Commission, MacKenzie Bezos will retain shares representing about 4 percent of Amazon’s outstanding common stock, making her the third-biggest shareholder at the company, behind her ex-husband and Vanguard. He remains the richest person in the world, even after losing $35.6 billion in Amazon stock.

Amazon’s stock was down about 0.4% Thursday afternoon following the news.

Grateful to have finished the process of dissolving my marriage with Jeff with support from each other and everyone who reached out to us in kindness, and looking forward to next phase as co-parents and friends. Happy to be giving him all of my interests in the Washington Post, Blue Origin, and 75% of our Amazon stock plus voting control of my shares to support his continued contributions with the teams of these incredible companies. Excited about my own plans. Grateful for the past as I look forward to what comes next.

In a separate statement, Jeff Bezos shared his gratitude to his ex-wife.

“I’m grateful for her support and for her kindness in this process and am very much looking forward to our new relationship as friends and co-parents,” Bezos said.

The announcement clears up some concerns investors had in the days after the couple announced their plans to get a divorce about who would have voting power at Amazon. The Bezoses’ split represented a unique situation, according to divorce law experts, since the two were together before Amazon started and before either of them owned such a vast amount of money.

While other founders and CEOs have gotten divorces, most had met their spouses after acquiring their wealth. MacKenzie Bezos, on the other hand, reportedly played a significant role laying Amazon’s roots. In an oft-cited origin story, MacKenzie drove the pair from New York to Seattle while Jeff wrote Amazon’s business plan. MacKenzie eventually negotiated Amazon’s first freight contracts, according to Wired.