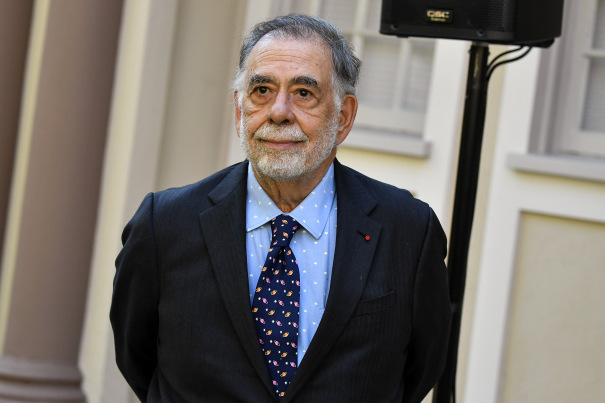 EXCLUSIVE: On the eve of his 80th birthday, Francis Ford Coppola is ready to embark on one of his dream projects. He plans to direct Megalopolis, a sprawling film as ambitious as Apocalypse Now, that he has been plotting for many years. Coppola revealed this to me today. He has his script, and he has begun speaking informally to potential stars. I’ve heard Jude Law’s name among those who might potentially be in the movie. I have much to report about Coppola’s dream project, and I got to view some of the second unit footage he shot after announcing the project in Cannes, before the terror attacks of 9/11 — the film is set in New York and is an architect’s attempt to create a utopia in the city, combated by the mayor — ground progress on the film to a halt.

“So yes, I plan this year to begin my longstanding ambition to make a major work utilizing all I have learned during my long career, beginning at age 16 doing theater, and that will be an epic on a grand scale, which I’ve entitled Megalopolis,” Coppola told me today. “It is unusual; it will be a production on a grand scale with a large cast. It makes use of all of my years of trying films in different styles and types culminating in what I think is my own voice and aspiration. It is not within the mainstream of what is produced now, but I am intending and wishing and in fact encouraged, to begin production this year.”

This comes after Coppola has locked Apocalypse Now: Final Cut, a version of the film that most pleases the storied director, and which will premiere at the upcoming Tribeca Film Festival.

“By having a record of all old cuts on Betamax, I was able to see what steps had been made toward the final version released,” he said. “Interesting, even though I’ve had ‘final cut’ since Godfather‘s success, I always tried to be reasonable about ideas or suggestions made by the ‘finance’ partners, distributors or studios. However, their unanimous comment of ‘too long’ often led to trimming things out, whereas in retrospect the solution can often be to put more in. Also changes often beget other changes and you don’t quite realize then the road you are following.

“Given that the Apocalypse original was not only long, but also unusual in style and substance for a film at that time, we tended to cut whenever possible not only in time but also in what then was considered ‘weirdness,’ ” he said. “Maybe 15 years later I happened to catch a TV viewing of it in a hotel, and as I always enjoyed seeing the beginning, started watching and ending up seeing the whole film. I realized that just with that time elapsed, that the film was not as weird as I had thought, and had become more ‘contemporary.’ The avant garde art of the present often becomes the ‘wallpaper’ (mainstream) art of the future. That plus many people’s (including distributor’s opinion) that so much great stuff had been cut out, led to what was later called Apocalypse Redux, which actually had a successful theatrical distribution thanks to Harvey Weinstein. But that version had all that had been cut out, restored. Later on, once again, when asked which version I personally wanted to be shown, I often felt that the original 1979 was too abruptly shortened, and Redux was too long, and settled on what I now felt was the perfect version, which is what we’re showing at Tribeca later this month, called Apocalypse Now Final Cut.”