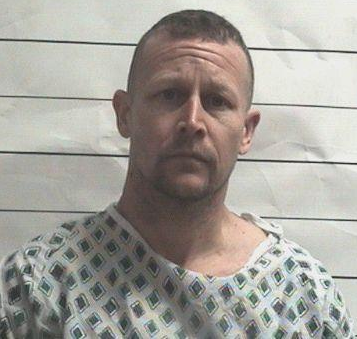 Ronald Martin, 44, also faces charges of aggravated assault upon a peace officer, possessing a firearm while acting violently, and unlawfully aiming a laser at a member of law enforcement, A four-count bill of information was quietly filed against him last week.

Other states have since adopted their own versions of that statute, which made police a protected class under hate-crime laws at a time when tensions between cops and other community members were high in Louisiana in the wake of shootings involving officers as both perpetrators and victims.

The law was enacted even though other violent-crime statutes already had built-in enhanced penalties in cases where the victim was a police officer.

According to records at Criminal District Court, Arcana was sitting in his unmarked cruiser while in uniform on Dec. 2 when he heard gunfire outside an office for state troopers assigned to patrol the Central Business District and surrounding areas.

Arcana then allegedly saw Martin point a laser sight on a pistol at him. The sergeant sought cover and then fired his .40-caliber pistol multiple times at Martin, an out-of-town, civilian special agent with the U.S. Army’s Criminal Investigation Command who was vacationing in New Orleans with his wife.

Martin fell after being shot during the confrontation near the Ernest N. Morial Convention Center. He was taken to a hospital and, once discharged, was jailed on a count of aggravated assault upon a peace officer.

Investigators said they confiscated a laser sight-mounted, .380-caliber pistol from the vacationer, who they claimed may have been impaired.

Martin was out of jail on a $5,000 bond when the bill of information adding charges against him was filed March 27. The case was allotted to Criminal District Court Judge Ben Willard, who left the $5,000 bond amount in place and set an April 10 arraignment date.

Martin’s attorney, Elizabeth Carpenter, has argued that her client was unjustifiably shot without warning. She said Martin pulled a gun out of a holster on his ankle after he lost his way back to his hotel and became frightened by a group of young people he suspected were following him.

Carpenter has contended that the trooper misread the situation when he saw Martin with a gun, fired at her client and only began asking questions afterward.

Martin is from near Fort Knox, Kentucky, and had traveled to New Orleans with his wife to board a cruise ship. An Army Criminal Investigation Command agent since 2009, he was shot after his wife had turned in early and he had decided to stay out, Carpenter said.

The Army suspended Martin from his post following his arrest. His current status is unclear.