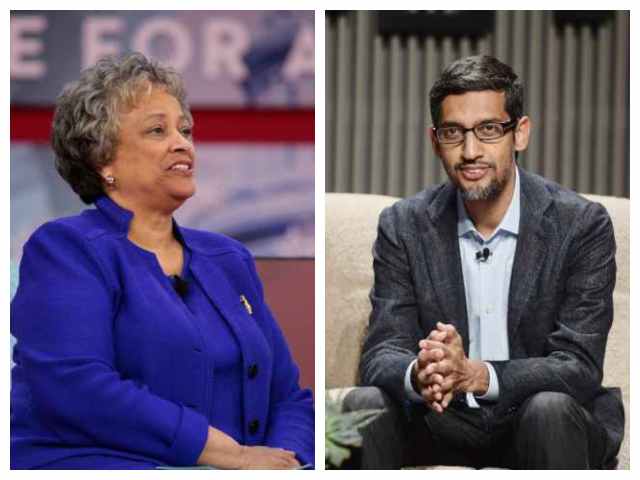 Internal discussion threads exclusively obtained by Breitbart News shows Google employees in meltdown over the tech giant’s decision to include the president of the conservative Heritage Foundation, Kay Coles James, on an artificial intelligence advisory council.

Multiple Google employees in the thread also engaged in outright smears against the Heritage Foundation. Google employees accused the think-tank of transphobia, homophobia, and “extremism,” of viewing LGBT people as “sub-human,” questioning their “humanity,” and supporting “exterminationist” views.

“Would we even consider having a virulent anti­-semite on the advisory board? How about an avowed racist or white supremacist?” asked one Google employee. “This seems like a double standard where anti­-LGTBQ positions are tolerated more than other extreme discriminatory views.”

“You don’t need racists, white supremacists, exterminationists on the board to know their stances. you can just talk to their targets” insisted another.

“It’s so upsetting that some of our leaders overlooked such hateful positions as Kay Cole James and the Heritage foundation have articulated and regularly advocate for,” complained another Google employee.

Another employee suggested that the “rhetorical violence” of the Heritage Foundation “translate[s] to real, material violence against trans people, particularly trans women of color.”

“There’s no need to have these people in positions of any kind of authority in order to get their views” wrote another.

Another Google employee was so incensed by the Heritage Foundation that he suggested another employee who defended the inclusion of Coles James on pragmatic grounds should lose his job.

“It’s not snobbery to object to associating with and legitimizing an organization dedicated to eliminating LGBTQ+ people from public life, driving them back into the closet, denying them healthcare, and so on,” raged the employee.
“It’s basic human decency, treating it like a difference of opinion is simply monstrous and I don’t think it belongs on this list, or at Google at all.”

“Please feel free to see yourself off this list if all you have to contribute is concern trolling about whether or not we’re pandering to rank bigotry enough. I’m muting you, and I think you should take a long hard look at how you’re behaving here.”

At least one of the Google employees who smeared the Heritage Foundation and its president is a prominent A.I researcher who has attended tech symposiums at the Obama White House. Meredith Wittaker, co-founder of NYU’s A.I. Now Institute and head of two projects at Google, the Open Research Group and the Measurement Lab, is revealed as one of the most vitriolic opponents of conservative involvement in Google A.I.

In the thread, Whittaker describes Kay Coles James, a black conservative who leads one of the most influential think-tanks in D.C., as an “outspoken bigot” who supports policies that “dehumanize and marginalize.”

In a different leaked discussion thread, Whittaker attacked the idea of viewpoint diversity (the idea that it’s valuable to tolerate and include a variety of ideological and political viewpoints) as “dangerous.”

“Justifying including bigots in the name of ‘viewpoint diversity’ is, flatly, a dangerous weaponization of the language of [diversity & inclusion]” said Whittaker, who has since helped organize an internal petition against Coles James’ inclusion. “I would note that the argument for viewpoint diversity was at the core of Damore’s memo, and has been used by the alt­-right to argue against diversity efforts that focus on historically marginalized communities.”

Whittaker also warned that the potential impact of A.I. was too dangerous to allow an “open bigot” like Coles James to be involved. She also used A.I. designed to assist ICE as an example of “harmful” A.I. Whittaker simultaneously recognizes the potentially vast influence and impact of A.I. while arguing that mainstream conservatives like the Heritage Foundation ought to be excluded from any participation in it.

“The potential harms of AI and “advanced” tech are not evenly distributed and follow historical patterns of discrimination and exclusion,” wrote Whittaker. “Those who have been historically marginalized are at the most risk of harm. See AI that doesn’t hear women, that doesn’t ‘see’ trans people, or people of color.”

“See systems deployed to aide ICE in targeting immigrants, to aid the Military in drone strikes, or to enhance worker control. Thus, in ensuring we are ‘ethical’ in our pursuit of AI dominance, we need to include and amplify the perspectives of those most at risk.”

Few Google employees offered any justification for their claims, although one linked to a tweet from Coles James in which she expressed support for a number of mainstream conservative positions, including border security, a critique of gender identity, and support for the coal industry.

“The value is understanding these people’s fears, and shining a light into how their population and ideas can be isolated or disproportionately targeted” wrote another Googler. “Leaving people out of the ML board will just mean that the external world will refuse to believe the board’s decisions are fair at all.”

“Is it disgusting? Yes, but that is the world we live in”

Blake Lemoine, a Google employee who Breitbart News has covered before, also emphasized the political expedience of including the Heritage Foundation’s president on the advisory council.

Pointing out that Coles James is “unimpeachable in the eyes of the Republican party,” Lemoine went on to outline the stakes for Google.

“The purpose of this advisory committee is to ease those people’s fears. The people on this committee will be able to see how we conduct ourselves and be able to “vouch” for the ethical standards which we’ll uphold. Kay Coles James wasn’t included so that she can advise us about how our systems can more effectively oppress the various groups of people who her organization has undeniably advocated against in the past and will certainly advocate against in the future. She was included on that committee so that she can advise us as to why we scare the ever­ living shit out of conservatives and what we can do to ease their fears so they don’t literally end our company’s existence.”

“Because that’s what’s on the line right now.”

Only one Google employee dared call out the viewpoint intolerance on display in the discussion threads.

“The notion of tolerance being bandied around here seems to amount to ‘tolerance for those who think like I do,’ which amounts to no tolerance whatsoever” wrote the employee. “I’d rather see Rand Paul, Jim Webb, or Tulsi Gabbard on the committee, but doesn’t mean I or anyone else should use irrelevant criterion to oppose membership.”

Allum Bokhari is the senior technology correspondent at Breitbart News. You can follow him on Twitter, Gab.ai and add him on Facebook. Email tips and suggestions to allumbokhari@protonmail.com.

Furman U. Prof Kelly Sharp Resigns After Being Accused of Lying About Her Race

Furman U. Prof Kelly Sharp Resigns After Being Accused of Lying...