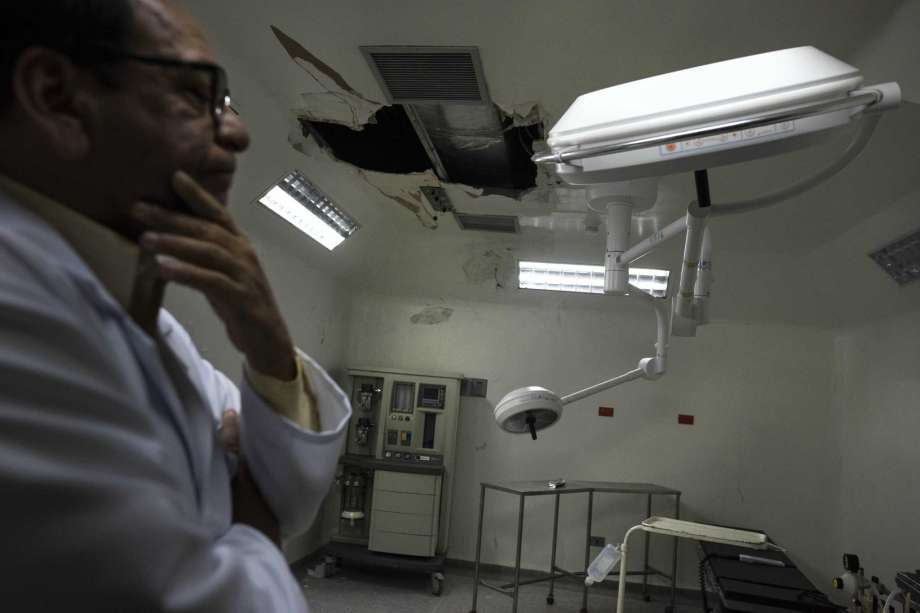 Renny Cardenas, state hospital director in San Cristobal, Venezuela, surveys the urology department last month. He said the equipment is useless with no spare parts, software or means to install it.

Renny Cardenas, state hospital director in San Cristobal, Venezuela, surveys the urology department last month. He said the equipment is useless with no spare parts, software or means to install it.

Venezuela’s health system is in “utter collapse,” according to a report, including the exponential spread of vaccine-preventable diseases such as measles and diphtheria and “dramatic surges” in infectious diseases such as malaria and tuberculosis.

The report, to be released Thursday by Human Rights Watch and the Johns Hopkins Bloomberg School of Public Health, is among the few that has sought to quantify Venezuela’s misery, as the country has ceased releasing health and nutrition data and retaliated against those who did.

Based on interviews with doctors and other health personnel in Venezuela, conducted by telephone and online; refugees in Colombia and Brazil, including health care professionals; and representatives of humanitarian and international organizations, the report concludes that the United Nations should take the lead providing aid.

It calls on U.N. Secretary General António Guterres to spearhead efforts to declare a complex humanitarian emergency, an official designation that would trigger a major, comprehensive effort under U.N. auspices and unlock the mobilization of international resources.

Humanitarian aid to Venezuela has been slow, compared with the need, because of the intransigence of President Nicolás Maduro – who has blamed deprivations on U.S. sanctions and refused to allow anything beyond a trickle of assistance to enter the country – and the reluctance of some donors to allow assistance to be distributed by the Maduro government.

A U.N. declaration, the reports’ authors say, would put Guterres in a position to press Maduro to allow U.N. agencies to lead and implement a large-scale humanitarian response aid.

Guterres has said the United Nations should not join any of the groups of nations promoting various political solutions to the Venezuelan crisis. They include the Lima Group of 14 Latin American nations, which along with the United States and some European countries, has demanded that Maduro leave office in favor of Juan Guaidó, the head of Venezuela’s Legislative Assembly, whom they recognized as the country’s interim president in January.

The Trump administration has imposed harsh economic and diplomatic sanctions against the Maduro government, even as it has stockpiled hundreds of tons of food and medical supplies along the Venezuelan border in neighboring Colombia that Maduro has not allowed to enter.

A contact group of the European Union and eight EU member states, along with four Latin American countries – most of them among the 54 countries that have recognized Guaidó – has called for new elections.

Separately, Mexico and Uruguay say they have adopted a “neutral” stance, still recognizing Maduro and calling for a political dialogue.

The differences among the groups has left the United Nations in something of a dilemma on how to approach the situation while avoiding a stand on what the political outcome should be. Other major U.N. members, including Russia, a Maduro ally, have criticized U.S. interference.

Asked whether the United States would support a U.N. takeover of the aid situation, Elliott Abrams, the administration’s special envoy on Venezuela, said the report is consistent with U.S. government reports and “contradicts the Maduro regime’s efforts to minimize the trauma it has imposed on the Venezuelan people.”

“The United States continues to seek ways to provide humanitarian assistance for the Venezuelan people,” Abrams said. “The regime should get out of the way, and stop blocking most assistance and politicizing the amounts that have been available.”

The administration has charged that Russian and Cuban support has been keeping Maduro in power. Following the arrival of about 100 Russian military personnel in Venezuela, President Donald Trump said last week that “Russia has to get out.”

In a radio interview Wednesday with Hugh Hewitt, Secretary of State Mike Pompeo said he “can’t talk about all the options that are being considered” but that Russia’s refusal to leave meant that “we will turn to other tools of American power.”

So far, the administration and its partners have been unsuccessful in persuading the powerful Venezuelan military to split from Maduro, even as millions have either fled the country or taken to the streets in protest.

The new report paints an extremely grim picture of life in Venezuela, whose once-prosperous economy has imploded because of mismanagement and corruption under Maduro, who has been president since the 2013 death of revolutionary leader Hugo Chávez. Oil exports have fallen by more than half.

In addition to widespread malnutrition and sharply increased levels of maternal and infant mortality, more than 9,300 cases of measles have been reported since June 2017, compared to a single case recorded between 2008 and 2015.

“Venezuela did not experience a single case of diphtheria between 2006 and 2015,” the report says, “but more than 2,500 suspected cases have been reported since July 2016.”

Electricity and water are in increasingly short supply, as is food and medicine. The report quoted a 2018 Pan-American Health Organization report estimating that nearly 9 out of 10 Venezuelans living with HIV were not receiving treatment.

Noting that the deprivation long predates recently imposed U.S. sanctions, it said that “Venezuelan authorities under Maduro have concealed the official health information. They have harassed and retaliated against those who collect data or speak out about food and medicine shortages.”