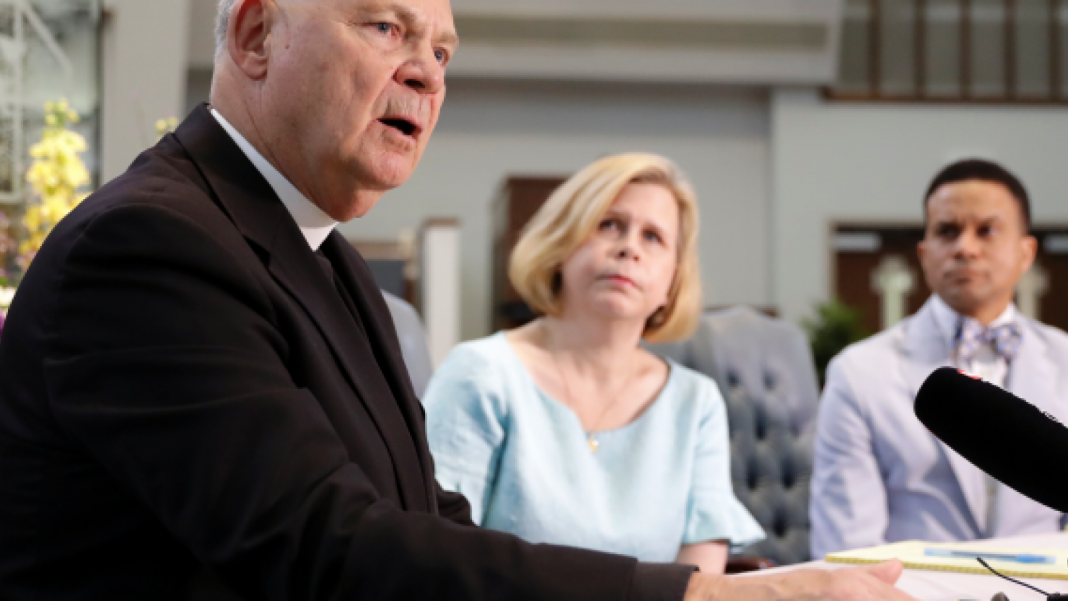 Pastor Charles Fels, left, who is also an attorney, speaks on behalf of death row inmate Don Johnson Wednesday, April 3, 2019, in Nashville, Tenn. Supporters of Johnson are appealing to Gov. Bill Lee’s strong Christian faith in requesting clemency for Johnson, who they say was redeemed by Jesus. At left is Kelley Henry, an assistant federal public defender, and at right is Pastor Furman Fordham. (AP Photo/Mark Humphrey)

Don Johnson’s clemency petition includes a plea from Cynthia Vaughn, the daughter of the woman Johnson was convicted of killing. Vaughn is also Johnson’s stepdaughter.

The petition quotes from Vaughn’s own letter to the governor in which she describes visiting Johnson in prison in 2012 after not seeing him since she was a little girl.

Vaughn said she vented three decades of anger and pain on Johnson, telling him how it felt not to have her mother around when she graduated from high school, got married and had a baby.

“The next thing that came out of my mouth changed my life forever,” she wrote. “I looked at him, told him I couldn’t keep hating him because it was doing nothing but killing me instead of him, and then I said, ‘I forgive you.'”

In the petition, Vaughn asks to meet with Lee and share her story in person.

The petition also emphasizes Johnson’s conversion from “a liar, a cheat, a con man and a murderer” to a Seventh Day Adventist Church elder who ministers to other prisoners.

Johnson, 68, was convicted of murdering his wife Connie Johnson in 1984 by suffocating her in a Memphis camping center that he managed. He initially blamed the murder on a work-release inmate who confessed to helping dispose of the body and was granted immunity for testifying against Johnson, according to court documents.

At a news conference Wednesday announcing the clemency campaign, Pastor Furman Fordham, explained that Johnson’s journey to becoming ordained as an elder at the Riverside Seventh Day Adventist Church while serving time on death row began when a now-deceased church member started a Bible study with Johnson 30 years ago.

When Fordham came to Nashville in 2006 to lead Riverside, he met Johnson in prison and was amazed to see an inmate leading a religious service.

He later met an ex-prisoner who had studied the Bible with Johnson.

“It said to me that Don’s ministry was moving full circle,” Fordham said.

The petition makes no claim of innocence, instead saying Johnson was “justly convicted of the murder of his wife.”

It details the abuse Johnson suffered as a child at the hands of his own stepfather and later in juvenile detention centers, but it says Johnson “does not place blame for his failure of character on anyone but himself.”

The petition includes excerpts from other letters sent to the governor by people who came to know Johnson through their prison ministry, volunteer work, mentoring and correspondence.

“These friends and supporters are adamant that Don’s faith is strong, and his reformation is real,” it reads. Many of the excerpts mention Johnson’s ministry to other prisoners. He also has a ministry outside of prison through a radio and internet show that plays recordings he has made on Sunday mornings on WNAH-1360 AM, according to the petition.

Tennessee executed three inmates in 2018 after a nine-year hiatus, during which legal challenges to the state’s lethal injection protocols put all executions on hold. Johnson’s execution, scheduled May 16, is one of four planned in 2019.

Lee, who took office in January, made his Christian faith a central component of his campaign. Previously asked about the four pending executions, Lee said they would be difficult decisions.

“The death penalty is the law in Tennessee, and I believe that it’s an appropriate law in the most egregious of cases,” he said. “But I think we have to look at each case individually, and we’ll do so when it’s the right time.”

She said Johnson told her Wednesday he that he accepts God’s will, “but he doesn’t feel his work on earth is done yet.”

In 2010, another Tennessee death row inmate with a similar story of redemption and forgiveness had her sentence commuted by then-Gov. Phil Bredesen. Gaile Owens was convicted of hiring a hit man to murder her husband. She later reconciled with their son Stephen Owens, who publicly pleaded with the governor for mercy.

CDC study suggests Covid-19 can be passed in brief interactions