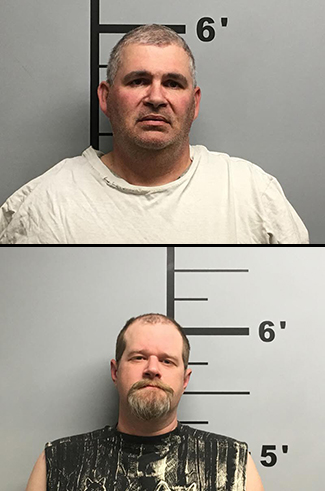 APRIL 3–Two Arkansas men took turns shooting one another while wearing a bulletproof vest, according to police who arrested the pair for felony assault.

As detailed in a probable cause affidavit, Charles Ferris, 50, and Christopher Hicks, 36, were drinking Sunday night on the back deck of Ferris’s residence when they came up the bright idea to shoot themselves.

Ferris, who was wearing a bulletproof vest, told Hicks to shoot him, according to the affidavit. Hicks obliged, firing a single round from a .22 caliber rifle into Ferris’s chest. While the vest stopped the bullet, Ferris was left with a painful welt on his chest.

Hicks then donned the vest.

Ferris, who would later tell cops that he was “pissed” about being shot, confessed that he “unloaded the clip” into Hicks’s back. None of the five rounds penetrated the protective vest, investigators noted, but Hicks “was bruised from them hitting him.”

Instead of admitting that he and Hicks had shot each other, Ferris spun a wild tale about coming under fire by a mystery assailant while he was protecting an individual he referred to as an “asset.” Ferris claimed that he was paid $200 to protect the “asset,” whom he had met in a bar in the city of Springdale.

But after his wife told police what actually happened, Ferris confessed to fabricating the cloak-and-dagger story, claiming that he did not want to get Hicks in trouble.

Both men were subsequently arrested in connection with the aggravated assault, a felony. They were released yesterday from the Benton County jail on $5000 bond apiece and are scheduled for arraignment on May 13.

A sheriff’s deputy reported confiscating the “bullet proof vest the subjects wore during the incident,” adding that, “The rifle will also be seized.” (4 pages)