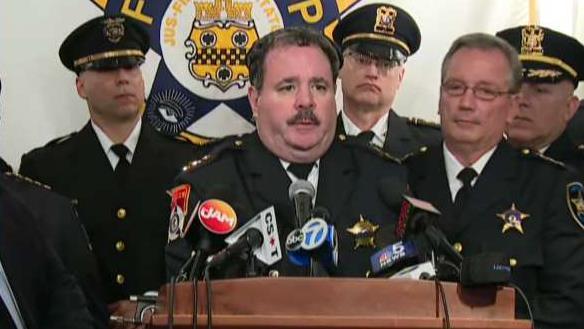 Police groups from in and around Chicago called Thursday for Cook County State’s Attorney Kimberly Foxx to step down, saying at a news conference they no longer had confidence in her ability to competently execute her duties in office.

The Chicago Fraternal Order of Police (FOP) and associations of police chiefs throughout Cook County voted to call for Foxx to resign, but they cautioned it was not only due to the Jussie Smollett case that has rocked the Windy City.

“This is not just about the Jussie Smollett case, which undermined the public confidence and law enforcement’s faith in Cook County criminal justice system…this is about many cases that have gone un-prosecuted or had charges reduced, especially assaults against police officers,” said Chicago FOP President Kevin Graham.

The FOP has requested a federal investigation into her conduct, Graham added.

“The persons that were involved in that case, one of them should have been in jail at the time he [Rivera] was murdered, but because the charges were reduced, he was out on the street and murdered a Chicago police officer,” Graham said.

But the kickstart for the movement to remove Foxx, who took office in 2016, began when her office dropped 16 felony counts of filing a false police report for “Empire” actor Jussie Smollet in an otherwise opaque and questionable proceeding. The move outraged Chicago Police Chief Eddie Johnson and then-Mayor Rahm Emmanuel, who called it “a whitewash of justice.”

The “Empire” actor was accused of faking a racist, anti-gay attack on himself. He agreed to let the city keep his $10,000 bail. Smollett maintains his innocence and insists he was attacked.

The calls for Foxx’s resignation came on the same day Smollett was to pay more than $130,000 to Chicago for costs the city incurred investigating his allegedly staged hoax. Smollet had seven days to pay back the city, per a letter delivered to his legal team from city police officials.

An internal email obtained by Fox News from Foxx’s office asked assistant state’s attorneys to dig for any examples to bolster her claim that the dropped charges were not uncommon or unique.

Other groups have echoed the police frustrations. The Illinois Prosecutor’s Bar Association called the manner in which the Smollet case was handled “abnormal and unfamiliar.”

The appearance of alleged impropriety is compounded by the fact that this case was not on the regularly scheduled court call, the public had no reasonable notice or opportunity to view these proceedings, and the dismissal was done abruptly at what has been called an “emergency” hearing,” an IPBA statement read.

Foxx has defended her decision and has not indicated she has any intention of resigning.

Brendan Shiller, a Chicago lawyer supportive of Foxx but not representing her, told Fox News, “They are using the Jussie Smollet case as a thin veil to protest the Cook County State’s Attorney’s criminal justice reform, and as an excuse to push a racist agenda of locking up black and brown people for even the most minimalist of crimes.”

He defended her record amid the torrent of protest and rancor from the police community.

“Since Foxx took office, violent crime in the County is down in part because her office is focusing on violent crime and resolutions that are alternative to incarceration–but law enforcement homicide clearance rates are still abysmal, because a large portion of law enforcement cares more about locking up black men than they care about solving violent crimes,” Shiller said.

Fox News’ Matt Finn in Chicago contributed to this report.