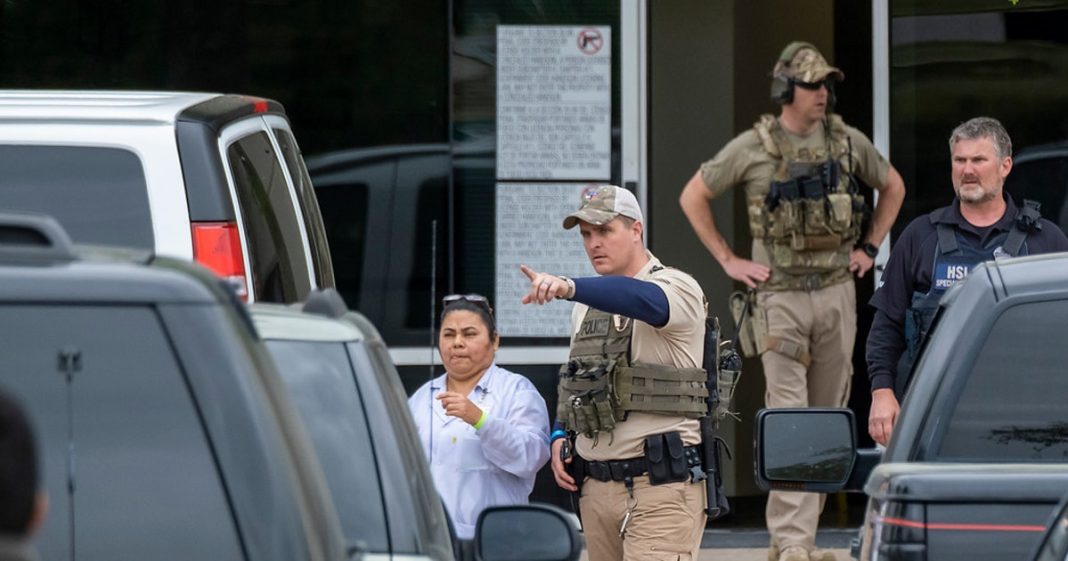 Dallas immigration attorney Eric Puente said people without immigration documents who were taken into custody Wednesday will be able to request bond in two to three weeks — the first step in making their case to stay in the U.S. by showing they are not dangerous and are valuable members of their community.

At a later hearing, individuals appear before a federal immigration judge and can make an initial case for relief from deportation, whether through a pending application for citizenship or by identifying a family member who is a citizen.

Puente said raids like Wednesday’s have become more common during Donald Trump’s presidency after falling out of use during the Bush and Obama administrations.

“This administration has moved away from audits and started using these tactics of raids that I hadn’t seen since I was a child,” he said. “I think the raid is more of a sensational way of reaching a certain objective, but I don’t know what the government’s objective is.”

RAICES said it would offer anyone affected free consultations at its offices in downtown and northwest Dallas. Attorney Felix Villalobos said that though the group normally sees about four cases a day, it had 26 consultations set up by early Wednesday evening.

“It’s going to be an all-hands-on-deck kind of day tomorrow,” Villalobos said.

At an ICE office near Dallas Love Field, where some of the workers were being processed, a long chain-link fence separated those arrested from their loved ones outside. There was lots of chatter, mostly in Spanish, as traffic rumbled by on Interstate 35E. Activists handed out cookies and other snacks while they waited for updates from inside the facility.

Sergio Villanueva, 41, of Carrollton paced anxiously, peering through the slits in the fence in hopes of catching a glimpse of his wife, Sara Villanueva.

They married in November and Sergio, a U.S. citizen, said they were working on filing to adjust her status. Sara has no criminal record, and Sergio expected her to be released Wednesday night.

She texted him to let him know what was happening when ICE agents arrived at CVE. Sergio rushed to the building about 10 a.m. but was unable to see her. He was then told to go to the ICE holding facility in Dallas to wait.

“I feel such impotence not being able to do anything. I just want to know what to do,” Villanueva said.

Jose Torres, 21, was relieved to be reunited with his mother after she was released from the ICE facility Wednesday evening.

He said he was about to go to work about 11 a.m. when his mother, who declined to give her name, told him about the raid at CVE, where she had worked cleaning the building for more than two years.

She heard alarms going off and thought there was a fire. People were screaming and trying to get out, she told him.

When she was released just after 6 p.m., Torres’ mother was still in her CVE uniform, holding a sandwich she had been given.

Torres said he had already been making plans to find a lawyer for his mother, who is from Mexico, so she could keep working.

“I know my mom always has her records clean,” he said.

Valerie Trevino, 24, spoke on the phone as she waited for her mother, Graciela Velazquez, to be released.

Trevino’s mother sneaked away to her locker at work before she was detained and had just enough time to tell Trevino about the raid. Velazquez moved from Mexico 25 years ago and has worked for the company for years, Trevino said.

Trevino was distraught that someone like her mom, who she said doesn’t have a criminal record, would be rounded up a large-scale raid.

“It’s insane to just get people who are working to make a living,” she said. “They’ve done nothing wrong besides work. My mom’s worked her entire life here. So other than that, I mean what really is her crime?”