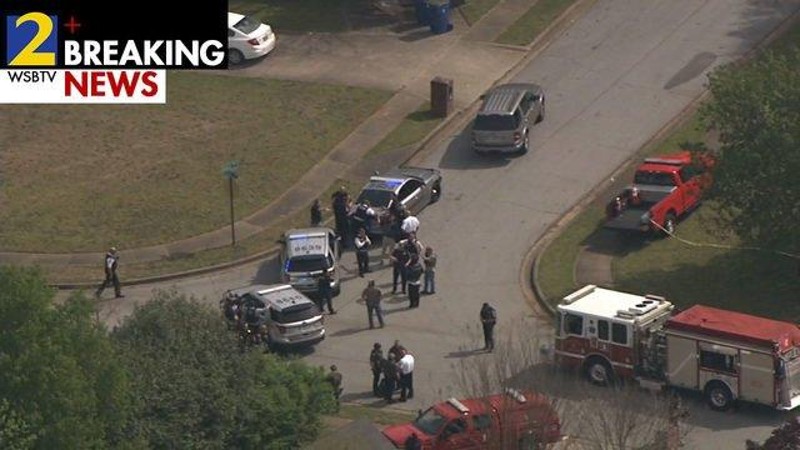 Two Henry County police officers were shot and a suspected gunman barricaded himself inside a home Thursday during an hours-long incident in a Stockbridge neighborhood, according to police.

The two officers, whose names were not immediately released, were taken to Grady Memorial Hospital in serious condition, according to Henry police Capt. Joey Smith. The two bring the total to three metro Atlanta officers shot in the line of duty in four days.

Officers responded to a home along Eagle Way, about three miles from I-75, about 10:45 a.m. on a report of “unknown trouble,” Smith said Thursday afternoon. “Another potential civilian victim” was inside the home, but Smith could not confirm their condition. Channel 2 Action News reported that at least one person is dead inside the home.

Outside the home, grief-stricken relatives were consoled by officers. Neighbors were told to stay away from the crime scene, including Lena Holt, who saw the police presence on her street through her video doorbell.

One of the injured officers was flown to Grady and the second by ambulance, Smith said. Police temporarily blocked I-75 in the area of Hudson Bridge Road as the wounded officers were taken to the hospital.

All lanes later re-opened, but heavy traffic delays remained in the area in both directions.

Several nearby police agencies, including Jonesboro and Clayton County, also responded to the scene. Residents were being asked to avoid the area.

It was the second time in four months a Henry County officer was shot in the line of duty. On Dec. 6, Officer Michael Smith was shot while trying to subdue a man outside a dental office. Smith, 33, died from his injuries Dec. 28.

Six Georgia officers died in the line of duty in 2018, including four in metro Atlanta. Smith was the second Henry officer to die in 2018. In February, Locust Grove police Officer Chase Maddox was shot and killed while assisting deputies serving a warrant.

MORE: Henry officer is Georgia’s 6th killed in line of duty this year

So far this year, one Georgia officer has been killed in the line of duty. On Jan. 29, Glascock County Deputy Joshua Ryer Jr. was killed in a two-vehicle crash while on the way to pick up an inmate. The 19-year-old had been with the department for five months.

Henry County students and teachers are on spring break this week and no schools are affected by the police presence.

— Please return to AJC.com for updates.