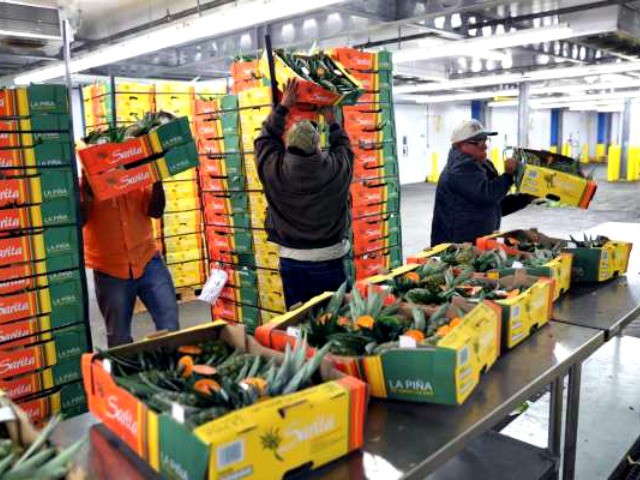 White House officials are scrambling to protect businesses from cross-border trade disruptions as President Donald Trump pressures Mexico and Congress to shut down Central America’s migration into the United States.

“We’re watching it and looking for ways to allow the freight passage, some people call it truck roads,” Larry Kudlow, Director of the National Economic Council, said in a brief interview with CNBC. “There are ways you can do that, which would ameliorate the breakdown in supply chains.” He continued:

The president’s positions on border security are well known … [the migration numbers are] crazy. The question is ‘Can we deal with that and not have economic damage?’ I think the answer is that we can, and people are looking at different options, particularly if you can keep those freight lanes, those trucks lanes, open. That is probably the nub of it.

But business also wants continued access to workers who commute from Mexico and to tourists arriving from Mexico. “That may be difficult,” Kudlow said.

White House officials say trade disruptions will happen as border officers are transferred from border checkpoints to help chase and registered the rising flow of economic migrants from Central America.

But the officials also say Trump is not trying to create the trade problems. “He’s hoping that Mexico will continue to step up, like we’ve seen them do over the last couple of weeks,” White House spokeswoman Sarah Sanders said. “We hope that that continues and that we can work with them so we don’t have to [slow trade transfers].”

Allowing trade disruptions “is not our first choice,” she said.

But Trump is threatening border trade that is vital for Mexico’s economy. “If we don’t make a deal with Congress, the Mexico border’s going to be closed. One hundred percent,” Trump told reporters on Tuesday. He continued:

We’re going to close large sections of the border, maybe not all of it. But it’s the only way we’re getting a response, and I’m totally ready to do it.

The threatened closures are mostly intended to pressure Mexico’s government to shut down the transfer of Central Americans through Mexico. That flow is expected to have hit 100,000 in March and may exceed one million before October.

The flow is rising because the migrants and the cartels recognize that Congress and the courts have cut open numerous loopholes in the border law, so allowing migrants to be released to take blue-collar jobs by simply asking for amnesty.

The flow may go far higher than the new record inflow of 4,100 people per day. In November, Gallup warned that five million people in Central America would like to move into the United States.

GOP and Democratic leaders blocked border and immigraiton reforms throughout 2018 that would have reduced the cross-border flow.

Democratic leaders argue the migration is not caused by the poor migrants’ search for U.S. jobs. They say it is instead a “humanitarian crisis” caused by civil breakdowns in Central America and it should be solved by more financial aid to Guatemala, Honduras, and El Salvador, not by immigraiton reforms and border security upgrades.

GOP leaders, in contrast, are pushing for legal changes that would allow companies to import more temporary workers who would go home every year instead of settling and eventually backing Democratic candidates.

The accelerating flow of migrants contradicts Trump’s campaign promises and will help suppress Americans’ wages in 2019 and 2020. The flood of cheap labor would block or even reverse gains made in 2018 when blue-collar wages rose by four percent as Trump’s “Hire America” policy lowered the inflow of foreign workers.

Any reduction in blue-collar wage gains will help deliver cheap labor to investors and Wall Street, as well as to employers and wealthy professionals.

The search for trade fixes is being forced by united opposition to trade disruptions by business and Republican and Democratic leaders.

“Closing down the border would have a potentially catastrophic economic impact on our country, and I would hope that we would not be doing that sort of thing,” Majority Leader Mitch McConnell said Tuesday.

Many industry groups, including groceries and auto companies, are denouncing any policies that might disrupt trade. The Washington Post reported:

Completely shutting down the U.S. border with Mexico, as Trump has threatened, could halt all U.S. automotive manufacturing within a week, impacting at least one million jobs, said Kristin Dziczek, vice president of industry, labor and economics at the Center for Automotive Research. She said virtually all U.S. auto production relies on some key parts from Mexico or Central America, and these products are brought into the United States on trucks or trains.

“The building of vehicles requires 100 percent of the parts to be there,” she said, adding that seat belts, engines, transmissions, and wiring harnesses are all brought across the U.S. border.

The top imports from Mexico are automobiles, electrical machinery, medical instruments, and mineral fuels, among other thing. The U.S. also imports more agricultural goods from Mexico compared with any other country, with $11.5 billion in fresh fruit and vegetables brought into the U.S. each year.

Other GOP leaders who routinely back business’s demands for cheap labor are also urging the president to shield businesses and investors from the snowballing impact of pro-business migration border rules. Politico reported:

“I understand the president’s frustration but the unintended consequences of that would be bad for everybody: economic, diplomatic,” said Sen. John Cornyn of Texas, who questioned how such a move could disrupt negotiations with Mexico to handle migrations from the Northern Triangle. “I take him very seriously. But I think we should have a longer conversation about unintended consequences.”

“It’s part of the way he negotiates, but I’m not sure that’s a particularly good idea and I’m not sure it gets the desired result,” said Senate Majority Whip John Thune of South Dakota of the potential closed border. “Tactically it doesn’t get a result and probably has a lot of unintended consequences … there’s a lot of bilateral trade at the border.”

This federal policy of flooding the market with cheap white-collar graduates and blue-collar foreign labor is intended to boost economic growth for investors. This policy shifts enormous wealth from young employees towards older investors, widens wealth gaps, reduces high-tech investment, increases state and local tax burdens, hurts children’s schools and college education, pushes Americans away from high-tech careers, and sidelines millions of marginalized Americans, including many who are now struggling with fentanyl addictions.