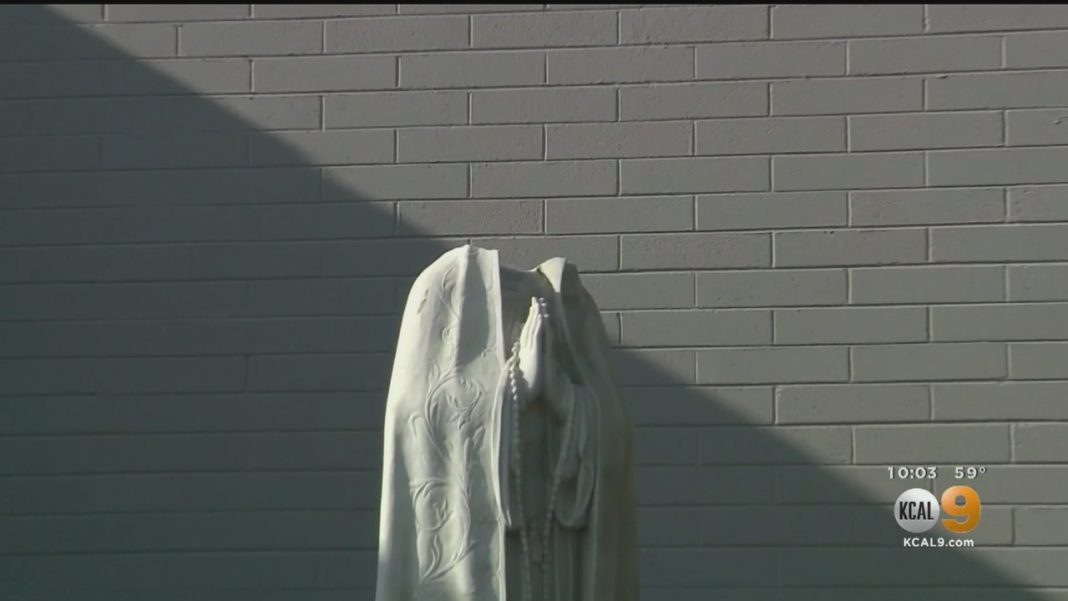 CHINO (CBLSA) – A vandal appears to be targeting Catholic churches in Pomona Valley, with the most recent attack on a beloved statue at a Chino church.

Pulling off the painters tape and peeling back a white sheet, Marianne Hacker uncovers a headless statue of Mary.

“This is a place we come to feel safe, to feel God’s presence, to worship with our community,” said Hacker, pastoral administrator at Saint Margaret Mary’s Church.

She’s guarded the chapel for more than 50 years, the entire time the church has been in existence on Central Avenue in Chino.

But on March 30, a vandal trespassed onto the property and delivered a blow that severed the statue in two.

The damage made the church recall a strikingly similar crime at another local Catholic church.

“That’s why I’m thinking it was a sledgehammer like they used at Our Lady Lourdes,” Hacker said.

Just a month ago and three miles away in Montclair, a person was caught on camera hopping onto a planter at Our Lady Lourdes Catholic Church and using what appeared to be a sledgehammer to hack the heads off two of their statues.

Saint Margaret Mary’s Church thinks the same person is responsible for both crimes, and now they wonder if the same person destroyed their double pane stained glass window last month.

“It’s a picture also of Mary that was just shattered by a huge, huge stone,” Hacker said.

Both churches say they don’t know why they were targeted, but they’re praying for the person who’s trying to hurt them.

The church says it will be using part of its renovation budget to purchase a new security camera.

Anyone with information related to the incident is urged to contact Chino police.