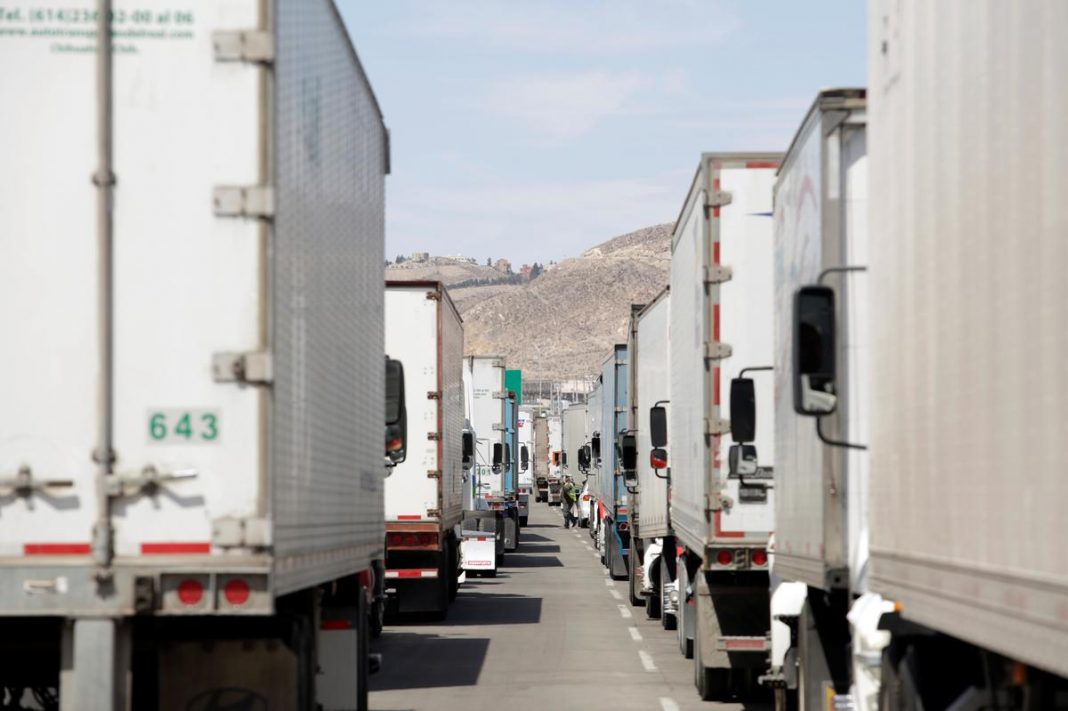 CIUDAD JUAREZ (Reuters) – Trucks delivering goods from Mexico to the United States are facing up to 12 hours of gridlock, drivers said, after a transfer of U.S. border agents to immigration duties slowed the flow of commercial traffic at several border crossings.

Trucks wait in a long queue for border customs control to cross into U.S., caused by the redeployment of border officers to deal with a surge in migrants, at the Cordova-Americas border crossing bridge in Ciudad Juarez, Mexico April 2, 2019. REUTERS/Jose Luis Gonzalez

President Donald Trump took a step back on Tuesday from his threat to close the U.S. southern border to fight illegal immigration, amid pressure from companies worried that a shutdown would inflict chaos on supply chains and the $1.7 billion daily trade.

But the reshuffling of border agents, announced last week to process the record number of migrant families entering the United States from Mexico, prompted delays of up to 12 hours for trucks crossing from Mexico’s Ciudad Juarez to El Paso, Texas, truckers told Reuters.

“Industry is most affected by this situation, due to the millions in fines they have to pay when deliveries arrive late to clients,” said Manuel Sotelo, head of the truckers union in Ciudad Juarez. He said the delays could even lead to the cancellation of contracts and layoffs.

Senior U.S. Department of Homeland Security officials said on Tuesday the recent redeployment of some 750 officers on the border to deal with a surge in migrants – mostly Central American families turning themselves in to border agents – led to the slowing of legal crossings and commerce at ports of entry.

“The U.S. threat is being carried out and having an impact on factories, transportation companies and most directly on drivers,” truck driver Jose Cota said.

The U.S. Customs and Border Protection (CBP) said in a statement that, as of Monday, the Otay Mesa commercial facility, one of the ports of entry at the San Diego-Tijuana crossing, would operate eight out of the 10 truck lanes for the inspection and processing of imports and conveyances from Mexico.

“The indefinite reduction of processing lanes at the Otay Mesa commercial facility is due to this deployment (of agents). As such, we will be unable to extend the hours of operation impacting our ability to provide services after our regular closing times,” it said.

Mexico’s customs agency said the Nuevo Laredo-Laredo crossing from the Mexican state of Tamaulipas into Texas was also affected and asked truck drivers to reschedule their deliveries considering that the port of entry would now close at 11:00 p.m. daily.

Trump said on Friday he would close the border this week unless Mexico acted to curb a surge of asylum seekers from countries in Central America. He backed off that on Tuesday, saying that Mexico had made progress in detaining migrant flows.

Long lines of trucks started forming at the border crossings from Friday, as the number of agents was cut, said Cota, who had been waiting since 6 a.m. to cross into El Paso.

“There is no danger … this is just the United States government’s way of pressuring and blackmailing,” Cota said.

Mexico’s foreign minister, Marcelo Ebrard, also noted that commercial traffic at the U.S.-Mexico border had slowed at several crossings due to the transfer of U.S. border agents.

“They don’t intend on shutting (the border) but they have this problem that they are reallocating personnel,” Ebrard said. He said Mexico would be prepared for the possibility of a border shutdown if it were to happen.