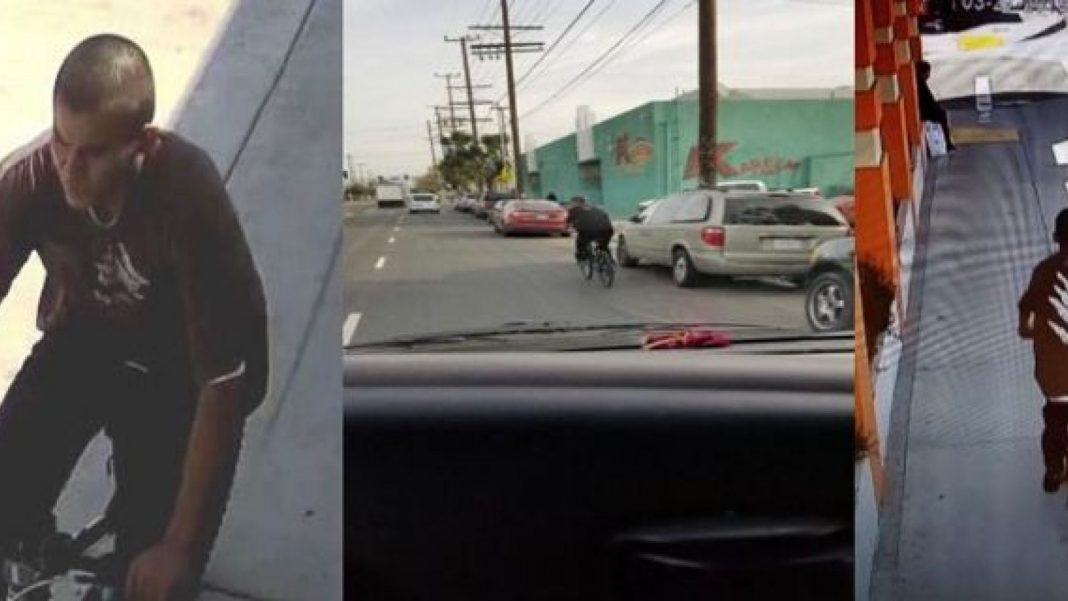 A man wanted in a series of slashing attacks around South Los Angeles and Southern Los Angeles County can be seen in these photos released by police.
(Los Angeles Police Department)

Authorities in the nation’s second-largest city are on the lookout for a man suspected of slashing at least eight people while speeding past them on his bicycle — with two new attacks reported in a Los Angeles neighborhood Monday.

The Los Angeles Police Department said in a news release the two attacks happened around 8:40 a.m. in the area of Florence Avenue and Avalon Boulevard in South Los Angeles.

One man reported to officers he was standing on the sidewalk near a bus stop when the slasher rode by and cut him with an unknown type of edged weapon, causing a “severe injury” to his face.

About 15 minutes later, a woman reported a man on a bicycle slashed her face as he rode by, causing a “severe injury to the left side of her face and ear,” according to police.

Both victims were transported by paramedics from the Los Angeles Fire Department to area hospitals, and both are expected to survive. Police released photos and surveillance video of the suspected slasher, who can be seen on his bike.

The attacks on Monday were among only the latest perpetrated against men and women in the past 11 days, KABC-TV reported.

“He’s striking from the rear, and when you do that, he is cutting all of these people really deep,” LAPD Detective Steve Garcia told the television station. “It’s hard to say if it’s a knife, possibly a box cutter.”

Additional attacks were reported last month in the same area and also in South Los Angeles County, all of which happened during daylight hours. On March 20, a man told police he was slashed by a man on a bicycle around 7:30 a.m. while at the corner of Avalon Boulevard and 59th Street.

The South Gate Police Department also had a similar incident on March 27 shortly after 11 a.m. involving a man who slashed a victim’s face with a sharp weapon, causing a severe injury.

The suspect is described as between 18 and 30 years of age with short hair and usually riding a black and green mountain bike. The man is between 5-6 and 5-8 and weighs about 150 pounds, according to police.

A suspect in a serious of slashings in Los Angeles can be seen in this surveillance video.
(Los Angeles Police Department)