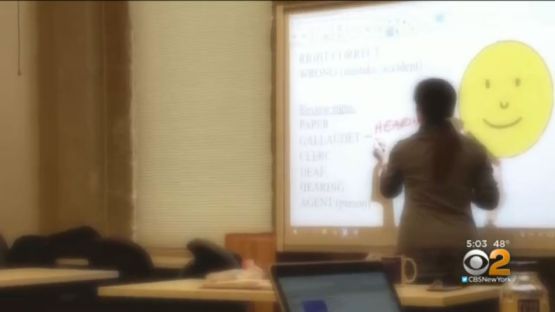 Two tech-savvy teenagers are accused of disabling their high school’s Wi-Fi system. Police said they did it to get out of tests, but now they’re facing charges.

Police are calling what happened at Secaucus High School illegal, but also ingenious.

They said two 14-year-old boys — ninth graders — were arrested last Thursday for hacking into the school’s Wi-Fi, making it impossible for teachers to give any tests or teach any lessons that relied on the internet.

It was all the talk at the school Tuesday.

Siachandris said she knows the two student who did it.

“I saw them and I asked them about it and they just … they thought it was funny because they didn’t want to go to school,” Siachandris said.

Police said it happened over several diverse days in March.

Secaucus School Superintendent Jennifer Montesano confirmed the story in a statement, saying, “Our Wi-Fi connection was compromised over the past week. We have determined that two students may have been involved in the disruption of our system.”

The question, of course, is how did the two kids do it? Police told Rapoport the students used a private company to hack in and disable the schools Wi-Fi.

“It’s possible that they used an app or paid somebody online to do this for them,” CNET security reporter Alfred Ng said. “There are services like this available online.

“Basically, since so much data and signals to the school’s Wi-Fi network that it can’t handle all this information and basically shuts down or jams,” Ng added.

MORE: Researchers: Wi-Fi Can Be Used To Detect Bombs

“I don’t think it’s right in any circumstance, but clearly they have some future in computer science or IT development,” student Abagail Williams said.

The two students were eventually released to their parents. There was no immediate word on how they got caught.

CBS2 has yet to hear what kind of discipline the students will face in school.