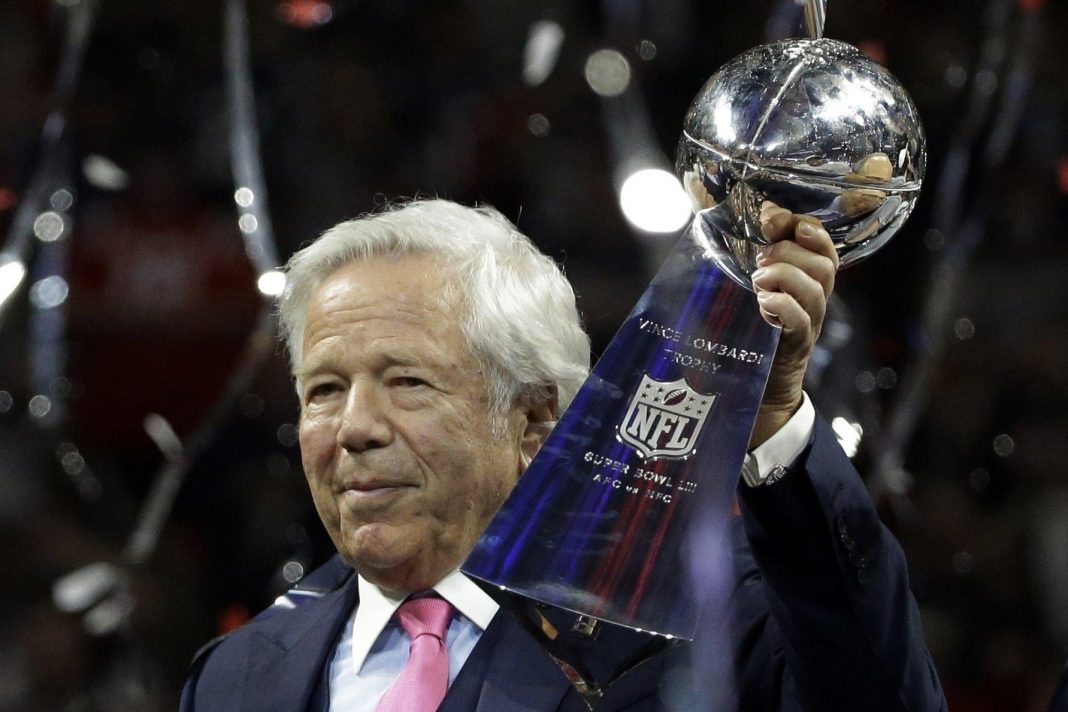 In a 92-page motion filed Tuesday in his prostitution solicitation case, the Patriots owner’s attorneys argue video evidence against him in the day spa bust should be thrown out.

WEST PALM BEACH — Armed Jan. 18 with a “constitutionally problematic” sneak-and-peek warrant, Jupiter police reported a “phony ‘suspicious package,” forcing everyone out of the Orchids of Asia Day Spa and allowing officers in to install cameras inside it as part of what Robert Kraft’s attorneys called an “NSA-style surveillance campaign.”

Kraft’s attorneys filed a 92-page memorandum Tuesday citing legal objections to how police gathered evidence — particularly the use of hidden cameras — against the part-time Palm Beach resident and 24 other men, as well as the spa’s owner and manager, in a monthslong investigation. As such, his attorneys are asking a judge to throw out any evidence obtained from the cameras, a Florida Department of Health employee’s so-called routine inspection and a supposedly frivolous traffic stop to identify Kraft.

“Because we do not live in a police state and our government answers to the rule of law, suppression of the illegally-obtained evidence is the correct and essential remedy,” his attorneys wrote.

The billionaire owner of the New England Patriots declined to make a deal with the Palm County State Attorney’s Office, which offered all 25 men charged in the bust the chance to have their cases dismissed in exchange for saying they would have been found guilty had the case gone to trial. As part of the deal, the men also would have to agree to perform community service, take a class on the dangers of soliciting prostitution, receive a screening for sexually transmitted diseases and pay both a fine and court costs.

Kraft’s legal team, including Jack Goldberger, William Burck and Alex Spiro, are fighting the allegations against him by, in part, questioning the legality of how Jupiter police obtained evidence in the cases against him. In the most recent motion, they dissect how police justified a sneak-and-peek warrant and in turn counter each of the department’s arguments.

Such an invasive tactics as installing hidden cameras should be reserved for the most serious law-enforcement investigations, Kraft’s attorneys argue, and historically have been. Such tactics are typically used by federal authorities in cases investigating drug trafficking, terrorism and large-scale counterfeit money schemes, the motion states.

“Law enforcement in this case had no authority whatsoever for something as drastic as ‘sneak and peek’ video surveillance, much less continuous, unbounded video surveillance of naked patrons in private licensed massage parlors,” the motion reads.

In the warrant Sharp details the department’s investigation through Jan. 15: Officers had done dozens of hours of surveillance in the shopping plaza along U.S. Highway 1, stopped men leaving the spa who admitted they paid for sex acts and confirmed that used towels in the business’ garbage had semen on them.

Sharp wrote that he had probable cause to believe prostitution was happening at the business but explained that officers “are unable to directly observe the said act of prostitution, which provides the necessary element to the charge of deriving funds from the proceeds of prostitution without the assistance of covert visual, non-audio surveillance.”

Sharp countered the use of other investigative tactics, such as sending in an undercover officer, interviewing current and former employees and probing more customers, by citing ethical concerns, as well as the tactics’ impracticality — employees at such spas rarely cooperate with investigators, Sharp wrote — and potential harm to their case.

In short, Sharp said he needed more evidence to prove his case, something he argued could only be obtained with a sneak-and-peek warrant.

Kraft’s attorneys, however, described Sharp’s move as one of several “eye-popping invasions” for a “run-of-the-mill misdemeanor case.”

“The worst offenses that jump out from this record are not those committed by one or another masseuse or spa patron whose massage allegedly included consensual sexual acts,” the attorneys wrote. “Far more worrisome than any alleged misdemeanor are the astonishing lengths to which law enforcement went in order to orchestrate a calculated, systemic campaign to blow past established constitutional limits.”

The memorandum pointed to a local case from 2013 in which law enforcement used an undercover officer, as opposed to hidden surveillance cameras, to investigate prostitution allegations at an Asian day spa. It’s a tactic Vero Beach police used in their investigation, a complement to Jupiter’s, and one used in numerous spa prostitution busts across Palm Beach County over the last few years.

Coates, who approved the warrant Jan. 15, did not immediately respond to a request for comment.

Kraft’s attorneys argued that Sharp’s request for the warrant tried to play into rumors of the spa’s ties to human trafficking, although months after the multi-county investigation, which spans up the Treasure Coast and over to Orlando, began, no one has been charged with trafficking. Kraft’s attorneys argued that in news conferences, Jupiter police and State Attorney Dave Aronberg also played “up the investigation’s fabricated connections to human trafficking.”

Investigators have said there is strong circumstantial evidence of human trafficking — the soliciting, recruiting or harboring of another person to exploit him or her for labor, domestic servitude or sexual exploitation — at the day spas.

They say women came to Florida from China under the guise of having legitimate jobs in them, only to find themselves forced to commit sex acts, and often were confined to the spas when not working, eating and sleeping there. Authorities say human-trafficking cases take time to build and require the cooperation of the women who have been trafficked.

After Jupiter police obtained the warrant, their use of the cameras was both broad and intrusive, Kraft’s attorneys said.

“An untold number of unsuspecting, innocent, naked patrons who were doing nothing wrong” may have been recorded alongside the “johns” Jupiter police say paid for sex acts, the attorneys wrote.

And besides the slew of legal and ethical concerns surrounding the video, Kraft’s attorneys argued that the traffic stop Jan. 19 as Kraft left the spa with his driver “was merely a ruse to identify the passenger in the car.” They said officers had no “reasonable suspicion” to pull Kraft over.

Jupiter police have refused to turn over any documents to The Post about that stop, citing Florida statute that keeps records tied to an open investigation exempt from public disclosure.

The motion also called the Florida Department of Health inspection in November was a “warrant-less search” and argued that the ruse of a routine inspection crossed ethically boundaries because Jupiter police coordinated so closely with the inspector.

‘Use tongs’: Parents spooked about kids trick-or-treating on Halloween, experts divided on how to do it

Vote ‘If You Want the Country to Be Different Than It...