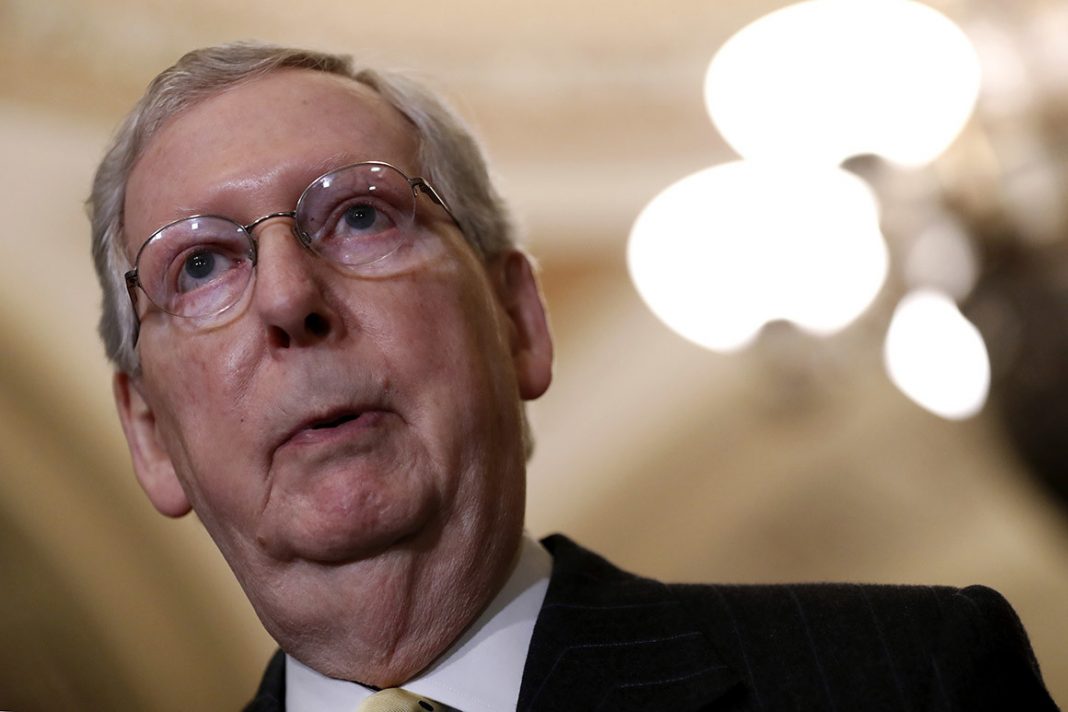 
Senate Republicans used the “nuclear option” Wednesday to unilaterally reduce debate time on most presidential nominees, the latest in a series of changes to the fabric of the Senate to dilute the power of the minority.

The move by Senate Majority Leader Mitch McConnell (R-Ky.) immediately paves the way for quicker confirmation of President Donald Trump’s judicial and executive branch picks and comes amid deep GOP frustration with Democratic delays. Future presidents will benefit too, though McConnell and Trump stand to gain inordinately as they seek to fill 130 District Court vacancies over the next 18 months before the 2020 election.

The nuclear option — a change of the Senate rules by a simple majority — gained its name because it was seen as an explosive maneuver that would leave political fallout for some time to come. But it’s now been deployed three times in just six years amid continuous partisan warfare over nominations.

McConnell and Minority Leader Chuck Schumer engaged in an ugly round of recriminations ahead of the rules change, barely able to make eye contact as they groused at each other.

Schumer asserted that he was “so sorry that my Republican colleagues have gone along with Sen. McConnell’s debasement of the Senate.” The New York Democrat called the change “disgraceful” and said it was a “sad day in the Senate’s history.”

McConnell absorbed the criticism, cracking a smile at times as Schumer castigated him. Then he stood up and said Schumer was responsible for the quagmire, having launched filibusters of President George W. Bush’s nominees.

“He started this whole thing,” McConnell said, pointing at Schumer. “This is not a sad day. This is a glad day.”

Republicans first sought to cut debate time on executive nominees, with the Senate voting 51-48 to overrule existing precedent. It then did the same to judicial nominees a couple hours later with another 51-48 vote.

Two GOP senators, Mike Lee of Utah and Susan Collins of Maine, voted with Democrats to preserve the current rules.

McConnell trashed Democrats’ “systematic obstruction” as he stumped for his effort on the Senate floor. His move is particularly consequential in divided government when much of the Senate’s time is now spent confirming executive nominees and lifetime judicial appointments. Under the change, debate time on District Court nominees and subcabinet executive nominees is slashed from 30 hours to 2 hours, a shift that will allow Republicans to fill dozens more vacancies over the coming months.

“It is time for this sorry chapter to end. It’s time to return this body to a more normal and reasonable process for fulfilling its constitutional responsibilities no matter which party controls the White House,” McConnell said on Wednesday afternoon. Of Democrats’ slowing Trump nominees, McConnell said: “This is new. And it needs to stop.”

Of course, McConnell and the GOP also fought against President Barack Obama’s nominees, sometimes in ruthless fashion. The Kentucky Republican’s decision to deny Supreme Court nominee Merrick Garland a hearing in 2016 set off the latest round of nomination battles, leading to a Democratic filibuster of Justice Neil Gorsuch and the GOP’s subsequent elimination of the supermajority requirement on high court judges.

“He seems to have completely forgotten the Obama administration,” said Sen. Michael Bennet (D-Colo.), quoting at times from a McConnell op-ed on nominations “fittingly” published on April Fool’s Day. “He led the most famous blockade that’s ever happened in the Senate. And that was the blockade of Merrick Garland … it was shameful.”

The reality is that both parties have increasingly sought an edge using the Senate’s rules in the majority and minority — forcing unnecessary procedural votes for nominees that will be confirmed anyway, watering down the filibuster and in McConnell’s case, holding open Obama’s judicial vacancies for Trump.

“Republicans believe, regardless of who the president is, they should be able to hire their staff,” insisted Sen. James Lankford (R-Okla.), who noted he had offered a previous temporary deal shortening debate time for nominations during Obama’s presidency. “I was told no by every single Democrat.”

Democrats accused Republicans of putting their ideology ahead of the institution. Schumer made a lengthy argument that conservatives are trying to institute their agenda through the courts because it can’t pass Congress.

Notably, the latest rules change came with little of the drama of past maneuvers, in part because this reform is relatively modest but also because changing the Senate’s precedents is now increasingly common.

Though history was being made, the whole exercise seemed rote and the outcome already assured. Some senators fiddled with their phones as McConnell and Schumer argued. Sen. Mike Braun (R-Ind.) flipped through a newspaper in the Republican cloakroom while Sen. Kyrsten Sinema (D-Ariz.) talked on the phone in the Democratic cloakroom.

The history of the nuclear option has been written at an increasingly rapid pace over the last two decades. The Senate defused the nuclear option and saved the filibuster during Bush’s presidency, but not before Schumer and other Democrats blocked Miguel Estrada’s nomination to the D.C. Circuit Court.

Facing an increasing deficit in the federal courts, Democratic activists want the party to commit to further reforms like adding seats to the Supreme Court if Democrats take the Senate and win the White House.

“Mitch McConnell is setting a precedent that it’s OK to change the Senate rules to confirm more of your side’s judges. Democrats should take this ball and run with it once we regain power,” said Brian Fallon, a former Schumer aide and executive director of Demand Justice, a group pushing the party to be more aggressive on judges.

Senators in both parties fear that the legislative filibuster will be next. That’s particularly true if one party wins the White House, House and Senate in 2020 and finds its big ideas stymied by a Senate minority.

McConnell sought to squelch that debate on Wednesday as he pushed the nuclear button yet again, even as other senators say the end of the filibuster as they know it could be just around the corner.

“The legislative filibuster is central to the nature of the Senate. It has always been, and must always be, the distinctive quality of this institution,” McConnell said. “We all know that both parties will possess future 51-vote majorities somewhere down the line. It will happen. The Senate’s long traditions on legislation therefore, need to remain in place.”

Marianne LeVine contributed to this report.