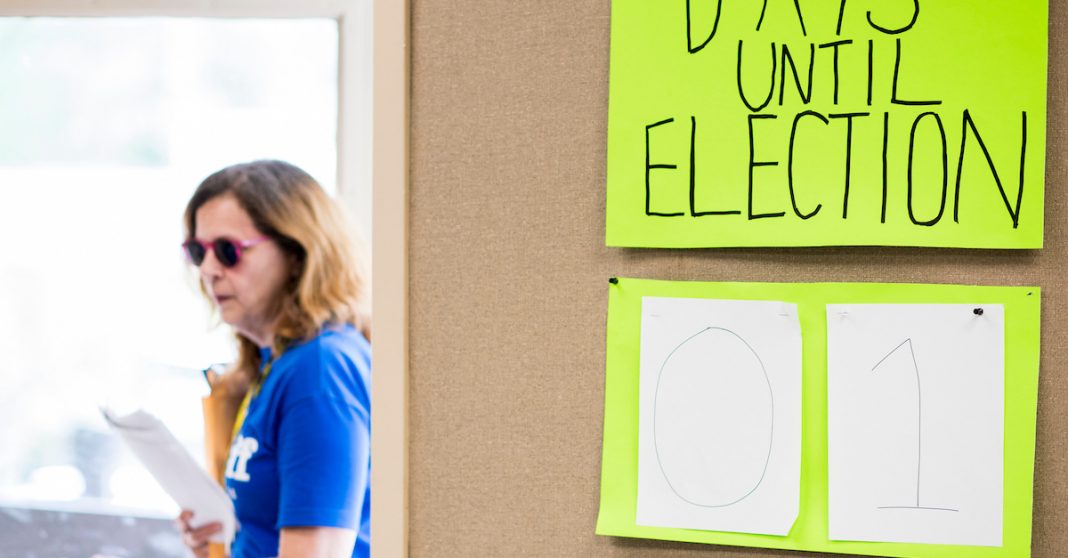 Pollsters gearing up for the 2020 presidential election have an additional task to contend with: convincing a skeptical public that their work is still reliable.

Questions about their methods have dogged them since President Donald Trump’s surprise victory in 2016, although the midterm results helped mitigate some of those doubts.

“I think that’s a sign that people learned from ’16,” said Democratic pollster Margie Omero, a principal at GBAO and co-host of “The Pollsters” podcast. She noted that 2018 surveys rightly predicted that Democrats had an advantage in House races.

While pollsters have attributed the 2016 surprise result to faulty punditry and a lack of polling in some key battleground states, they do acknowledge there were lessons to learn.  The most widely recognized takeaway was the importance of adjusting for the education levels of voters who participate in surveys.

But predicting what other dynamic could drive the next election remains difficult.

“It kind of has felt like you’re playing whack-a-mole,” GOP pollster Patrick Ruffini of Echelon Insights said. “You think you’ve solved one problem, and a new problem is popping up.”

Current pollsters still rely largely on telephone interviews, but fewer and fewer people are picking up. So as they look to 2020, many are preparing for a time when people don’t pick up at all.

After reaching a plateau in recent years, the percentage of people who complete telephone surveys dropped in both in 2017 and 2018, according to the Pew Research Center. Just six percent of people contacted by phone participated in their surveys last year.

That decline affects both public and private, or partisan, polling. Public polling, like surveys conducted by educational institutions and media outlets, often provide a snapshot of which candidate has more support. Private polls, conducted for specific campaigns, are used to craft a campaign’s messaging.

The most immediate impact of the drop in response rates is that phone surveys have become more expensive. That’s because firms have to make more calls to find enough people for the required sample.

That cost also has some worried there could be fewer public polls in the 2020 cycle. Don Levy, the director of the Siena College Research Institute, said pollsters are trying to partner with media outlets to conduct high-quality polls in battleground states — something that was lacking in 2016.

Levy was not sure if Siena would team up with The New York Times Upshot again. The college did 96 live polls in 60 races with the Times in 2018, and he said they would likely have to double that effort in 2020 to accommodate for the presidential race.

The decline in response rates has also meant pollsters have to adjust for not receiving sufficient responses from different demographic groups, particularly young people.

Multiple pollsters, from both parties and from public polling outlets, are now expecting an increasing shift to online surveys, but those present their own challenges. Most online polls use panels, or groups of people who have agreed to take the surveys. These are sometimes considered less dependable because the sample is less random.

Pollsters say that while online surveys at the national level, where the sample size is very large, are reliable, it is still difficult to narrow online surveys to a state or congressional district level.

Still, online surveys can help reach certain demographic groups, and traditional phone surveys remain a reliable source of data. So pollsters predict more use of “mixed mode” surveys, which include data gathered via landline and mobile phones, and online.

The challenge, said Democratic pollster Jefrey Pollock of Global Strategy Group, is determining the “right cocktail” for the poll, or how much data should be drawn from phone or online surveys.

Beyond the mixed mode surveys, some pollsters are also testing new methods.

Pollock said GSG had a “rogue operation” in 2018, separate from its other pollsters, that experimented with different modes, such as texting links to a web survey.

Ruffini of Echelon Insights, for example, said it was not clear that texting was a cheaper alternative. It is illegal to automatically dial mobile phones, so pollsters still need to hire people to individually dial numbers.

Levy of Siena College also said he’s heard differing opinions on the legality of sending text messages with links to surveys because the Federal Communications Commission notes it is not legal to send unsolicited texts to wireless devices.

“I don’t think it’s going to be widespread in this next cycle unless we get a definitive ruling,” he said.

One new Democratic firm tested a new method to reach voters online last cycle, with one of its founders saying she had “cracked the code” for online surveys.

Pat Reilly, the co-founder and chief growth officer at Change Research, said their surveys were cheaper and faster, and involved targeting voters in specific areas through social media, and drawing them in to participate.

A sample survey showed a sponsored ad that would appear in a voter’s social media feed with the text, “We have a new survey for the residents of Texas. To share your thoughts, please click the link below.” Their patent-pending “Bias Correct Engine” automatically weighs the results.

The starting cost for Change Research’s 35-question survey, which is sometimes referred to as a benchmark or baseline poll, is $3,400. Change Research estimated that a similar 35-question telephone poll conducted with live interviewers would cost around $30,000. Reilly said the low cost can help out candidates in state and local campaigns with limited budgets.

AJ Kahle, a senior adviser for Underwood’s campaign, said her team used traditional phone polls early in the campaign. But it used Change Research to field three online polls in the final six weeks of the race.

“Traditional phone polling would have cost us too much money at that point in the race, that could’ve been used for voter contact,” Kahle said.

The online surveys allowed Underwood’s campaign to test which messages — emphasizing her health care experience as a former nurse or a more economic message highlighting her middle-class status — appealed to different groups of voters, and to tailor their digital ads accordingly.

Despite new experiments, the verdict is still out when it comes to the best methods for reaching voters in a digital environment. But that challenge hasn’t necessarily caused despair.

“The biggest misconception is that the industry is in crisis,” said Brock McCleary of Harper Polling, the former polling director for the National Republican Congressional Committee.

“Year after year, the amount of online research we do increases,” he said. “And each year I have found that the reliability and predictability of that data gets better and better.”

Get breaking news alerts and more from Roll Call on your iPhone or your Android.