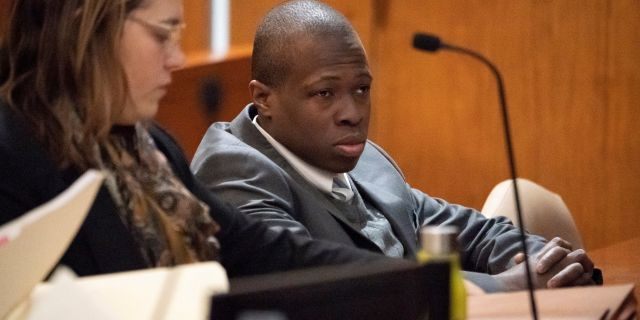 Convicted killer Chanel Lewis boasted about landing the “front page” of the two major New York City tabloids a day after he was convicted of sexually assaulting and strangling jogger Karina Vetrano in August 2016.

“I’m on the front page — of both papers,” Lewis said in his jailhouse phone interview with the New York Daily News on Tuesday. The “papers” Lewis was referring to are the Daily News and The New York Post.

He also recalled how many times news of the murder has appeared on the front pages of the city’s newspapers.

The 22-year-old’s first trial, in November, ended in a hung jury — but Monday jurors deliberated only five hours before returning the “guilty” verdicts.

Chanel Lewis at the defense table at Supreme Court in the Queens Borough of New York for the retrial of Karina Vetrano’s murder.
(AP)

His conviction was met with emotional cheers from Vetrano’s family and friends in court and also gave the slain woman’s parents, Cathie and Phil Vetrano, some closure nearly two years after their daughter’s death.

Lewis told the Daily News he plans to appeal the verdict.

“We’re going to appeal the process,” he said. “I’m going to let my lawyers handle that.”

But when asked about murdering the 30-year-old Vetrano, he simply responded with, “nothing,” instead preferring to talk about how his family is coping.

“They’re trying to hang in there,” he said.

He was arrested in February 2017 and soon confessed to the slaying in a taped interview. He told investigators that, on Aug. 2, 2016, he stormed out of his home because he was upset about a neighbor playing loud music. Lewis told cops he encountered Vetrano and suggested she was simply in the wrong place at the wrong time.

“She didn’t do anything,” he told police. “I was just mad at that time. I beat her to let my emotions out. I didn’t really mean to hurt her. It just happened.”

Lewis’ lawyers, however, insisted during the trial that the confession was coerced and the DNA evidence wasn’t gathered properly. They also say potentially exculpatory evidence wasn’t turned over to them by the prosecution, touting a late, anonymous letter that said cops were under pressure to find Vetrano’s killer and police had initially focused on finding “two jacked up white guys” before settling on Lewis.

“No matter what anyone says, Chanel Lewis is the person who did this to my daughter. No question about it,” Cathie Vetrano said outside the couple’s Howard Beach home.

“I sat for two and a half years listening to the most disgusting details of my daughter, her most horrendous death and last moments of her life at the hands of a savage demon,“ she said.