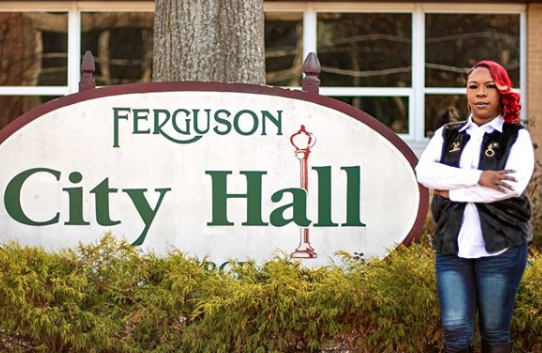 According to the New York Times Lesley McSpadden has lost the city council seat she was running for in a three-way race. Unofficial St. Louis County election results have Fran Griffin as the winner. McSpadden said if she had won that police accountability would have been her #1 priority.

The mother of Michael Brown, the black teenager who was fatally shot by a white police officer in Ferguson, Mo. in 2014, is vying for a chance to control the exact police department at the center of her son’s death.

Lesley McSpadden, 39, is one of three candidates running in Ferguson’s 3rd Ward city council elections Tuesday. She faces incumbent Keith Kallstrom and Fran Griffin, who has been active on several Ferguson boards.

McSpadden’s political hopes stem from her son’s death and the lack of accountability she believes is still prevalent today.

“I wanted to go back and do something in a place that did something so very wrong to my son, and I think that’s what my son would want as well,” she told The Associated Press.

Brown, 18, was killed by Darren Wilson on Aug. 9, 2014. His death — and a St. Louis County grand jury’s subsequent decision not to indict Wilson — sparked nationwide protests. Tensions in the community continued to rise as more people came out to condemn Ferguson police for their prior treatment of black residents.

Officers were accused of singling out black people for unnecessary traffic stops and harassing them on the street.

The U.S. Department of Justice found no grounds to prosecute Wilson, but did issue a report on the police and municipal court practices that led to a consent agreement requiring reforms.

Following the fatal shooting, McSpadden became heavily involved in the Black Lives Matter movement and was among seven “Mothers of the Movement” who appeared on stage at the Democratic National Convention in 2016. Those mothers lost children in police shootings, in police custody or from gun violence. She also testified that same year in favor of a Missouri Senate bill aimed at increasing use of police body cameras.

Police accountability and stronger relationships with the community are among her top priorities.

“I think they should work much harder to prove that they are there to protect and serve, because no one believed that in August 2014 and people are still skeptical,” she said.

However not everyone is on board with McFadden’s political pursuit.

LaTasha Brown, president of the Southeast Ferguson Neighborhood Association, criticized her for running for office from afar rather than in community.

“You can’t make change from a distance,” she told The Associated Press. “If you don’t know what your constituents are going through, if you’re not there to hear what they’re saying, how can you lead these people and make decisions for these people?”