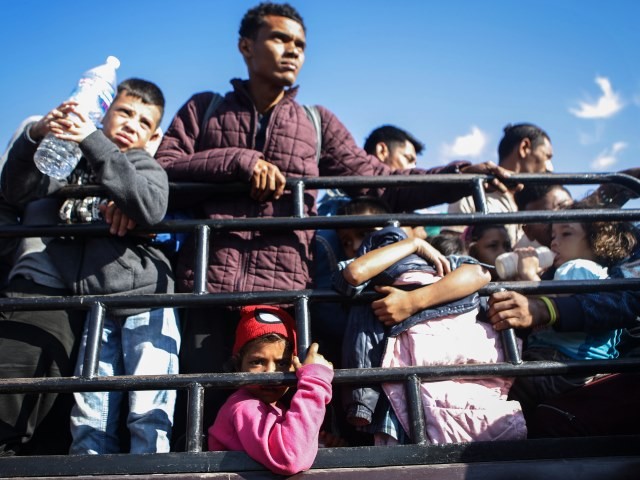 The Federal Attorney General’s Office (FGR) of Mexico announced the arrests of 15 suspected human smugglers in the southern Mexican state of Chiapas. The suspected smugglers allegedly packed 338 migrants into five passenger buses for transportation to the U.S. border.

The arrests took place after Federal Ministerial Police (PFM) received a complaint in which they received information that a group of smugglers was transporting a large group of Central American migrants along a rural dirt road, local media reported. Officers responded to the area where they located the caravan of five passenger buses loaded with 338 migrants in the outskirts of Tuxtla Gutiérrez. The city is the state capital of the state of Chiapas which borders Guatemala. The migrants consisted of 181 adults and 157 minors including Hondurans, Guatemalans, Salvadorans, Nicaraguans, and Cubans, according to the Federal Prosecutors Office.

Police arrested the 15 suspected smugglers were arrested and turned them over to investigators of the FGR for review of immigration law violation. During the arrest operation, police recovered three walkie-talkie radios, a laptop, and six cell phone which were believed to be used by the smugglers to communicate with each other, according to Breitbart News’ law enforcement sources. Besides the three passenger buses, the smugglers were also believed to be using three private vehicles as part of the smuggling caravan.

Officials turned the 338 migrants over to the custody of the National Institute of Migration (INAMI) for screening and medical and psychological evaluations.

Breitbart Texas reported extensively on the large groups of Central American migrants to include those traveling through the state of Chiapas as part of large caravans. Mexico has seen a marked increase of migrants from Central America passing through the states since October of 2018 when several large caravans began to form in Central America. They eventually passed through the state on their way to the U.S. border. The migrants have been flocking towards the U.S. border attempting to exploit flaws in the U.S. immigration system in order to obtain asylum. The flaws in U.S. immigration law created a magnet leading to record-setting border apprehension statistics. The new tactic is expected to result in approximately 900,000 migrants entering the U.S. this year, as per estimates by the Department of Homeland Security.

The large movement of migrants has also caused disputes between competing-human smuggling gangs who work the southern border region. In March of this year, a team gunman opened fire on three trucks transporting migrants on a highway in the southern border state of Chiapas leaving two dead and seven wounded, Breitbart News reported. The migrants, made up of primarily Guatemalans, were heading north toward the United States border as part of a caravan.

Also, in March of this year, 23 Central American migrants were killed and 33 injured in Chiapas after a large cargo truck packed with migrants by human smugglers crashed into a ravine.

Robert Arce is a retired Phoenix Police detective with extensive experience working Mexican organized crime and street gangs. Arce has worked in the Balkans, Iraq, Haiti, and recently completed a three-year assignment in Monterrey, Mexico, working out of the Consulate for the United States Department of State, International Narcotics and Law Enforcement Program, where he was the Regional Program Manager for Northeast Mexico (Coahuila, Tamaulipas, Nuevo Leon, Durango, San Luis Potosi, Zacatecas.) You can follow him on Twitter. He can be reached at robertrarce@gmail.com.