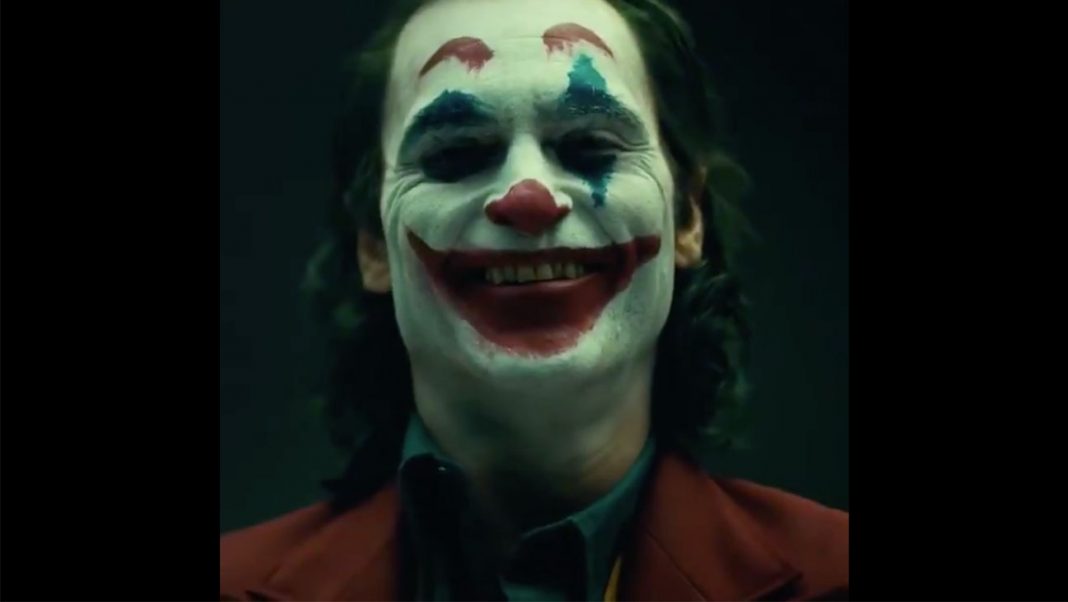 The DC universe took over Las Vegas on Tuesday afternoon.

Warner Bros. gave a glimpse of Joker a day early (the first trailer drops online Wednesday) to the crowd at CinemaCon. A poster also debuted earlier in the day.

Joker (set to open Oct. 4) stars Joaquin Phoenix and is from director Todd Phillips. In an era in which comic book movies are generally made to set up shared universes and sequels, Warners has insisted that Joker will be a one-off; there will be no sequels.

Phillips took the CinemaCon stage to joke about his time living at Caesar’s Palace for three months while making The Hangover. He noted that Joker was a difficult movie to talk about, as it’s an origin story about an iconic character with no definitive origin.

“I don’t have a lot to say about the film, as it’s still taking shape, but also because I want it to be a surprise. That said, there’s been a lot of chatter about what this film is and what it isn’t, and most of it hasn’t been accurate,” said the helmer. “When the marketing department at Warners asked me the other day to describe the movie, I said ‘I can’t.’ They said at least tell us the genre, and I thought about it for a minute and said, ‘It’s a tragedy.'”

Phillips showed off the trailer, which begins with Arthur (Phoenix’s future Joker) in therapy.

“My mother always tells me to smile and put on a happy face,” the character says in voiceover, as it shows him helping bathe his mother (Frances Conroy). “She told me I had a purpose, to bring laughter and joy to the world.”

He ends up getting attacked in the street, an incident that seems to move him down a dark path. “Is it just me, or is it getting crazier out there?” Arthur says.

The trailer shows him progressively trying out different Joker outfits, first dressing as a clown with a green afro and eventually dying his hair green for the trailer’s money shot of him in full costume. “I used to think my life was a tragedy,” he says. “But now I realize, it’s a comedy.”

Joker comes as Warner Bros.’ DC films have found their footing in recent months. Aquaman has grossed more than $1 billion since opening in December, and the studio is preparing to unveil the Zachary Levi starrer Shazam! on Friday. Other DC projects include Birds of Prey (and the Fantabulous Emancipation of One Harley Quinn), which is set to bow Feb. 7, 2020, and Wonder Woman 1984, which is slated to debut June 6, 2020.

Warner Bros. showed off a sizzle reel of the upcoming DC properties earlier in Tuesday’s presentation.

Birds of Prey director Cathy Yan noted her film, which stars Margot Robbie and is set in Gotham, will show a new side to that city. “Our Gotham is so much scrappier,” she said.

The footage seemed to be taken from a teaser that was released in January, showing the characters in a 1980s music video-style setting. Robbie noted that Harley is not a permanent member of the girl group Birds of Prey, but rather dives in and out: “They are absolutely insane.”

Next up was Patty Jenkins’ Wonder Woman 1984. “Diana is now in her full powers,” the filmmaker said of the lead character.

The footage shows Diana (Gal Gadot) and Steve Trevor (Chris Pine) strolling along the National Mall at night. There also was footage of Wonder Woman fighting bad guys in a mall and running full speed down the streets of Washington, D.C.

How Amy Coney Barrett Could End Up Deciding the Election