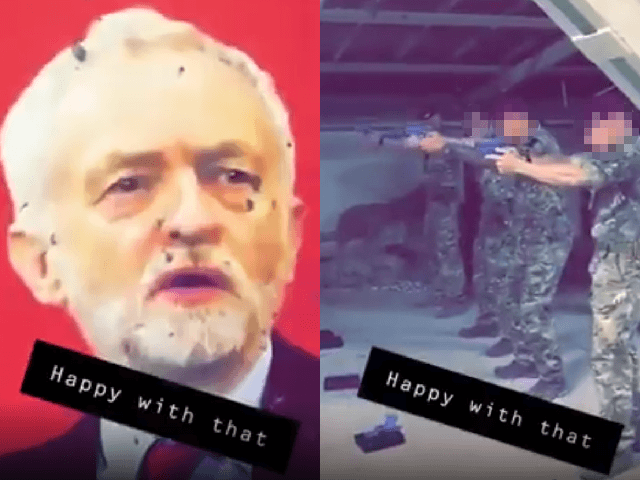 The Ministry of Defence (MoD) has launched an investigation after a video appearing to show soldiers shooting at a picture of Jeremy Corbyn was posted online and widely shared.

The video, which is captioned ‘happy with that’, depicts four paratroopers firing at a picture of the leader of the Opposition. The guns are thought to be firing training paint rounds rather than live ammunition.

The footage, which was reportedly taken at a military compound in Kabul, Afghanistan, appears to have initially been shared on Snapchat by a user with the name ‘J3 Para’. The Ministry of Defence has confirmed the footage is legitimate.

Video has emerged of soldiers on a shooting range in Kabul firing at a target of Jeremy Corbyn. MOD confirms it as legit: pic.twitter.com/qOr84Aiivj

A spokesman for the MoD said of the video, “We are aware of a video circulating on social media. This behaviour is totally unacceptable and falls well below the high standards the army expects. A full investigation has been launched,” reports the BBC.

The clip has seen an outpouring of criticism from Labour MPs in particular, with one Labour MP, Alex Sobel, writing, “I’ve submitted this Parliamentary Question… ‘To ask the Secretary of State for Defence what steps he has taken to investigate a video circulating on social media that depicts British soldiers using a picture of the Leader of the Opposition as target practice’.”

He added, “This needs urgent investigation by @GavinWilliamson. How can serving soldiers think it acceptable to use @jeremycorbyn the leader of the opposition for target practice.”

Labour MP Jess Phillips tweeted, “This is absolutely hideous and irresponsible under this or any climate.”

The video comes as MPs are receiving regular abuse and their safety has been called into question. Jeremy Corbyn was recently attacked by a man who threw an egg while shouting ‘Respect the vote’. The man, John Murphy, 31, was sentenced to 28 days in prison for the assault.

The incident follows an investigation by the MoD last year into soldiers who recorded themselves posing alongside anti-Islamic extremism activist Tommy Robinson. The soldiers met Robinson at a motorway service station and posed for photos together smiling and laughing.