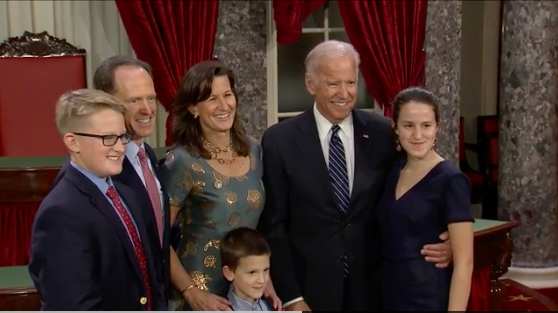 Two women in the past week have come forward to accuse former Vice President Joe Biden of inappropriate touching. Democrat politician from Nevada Lucy Flores said Biden came up behind her, grabbed her shoulders, and kissed her head. Another Democrat congressional staffer said Biden rubbed noses with her without her permission.

Biden is widely expected to announce he’s making a third run for the White House at the end of the month, and the media is beginning to question Biden’s behavior, specifically his interactions with women.

Yet, when he served as vice president, the media not only did not question Biden’s actions toward women, they enabled and celebrated his behavior.

“Best of Biden’s final Senate swearing-in” read the headline of a CNN video story from 2017. “Biden is Still Bidening,” read the Washington Post’s write-up of that same afternoon. That Post piece included a clip of Biden telling Pennsylvania Sen. Pat Toomey that he hoped the senator had “big dogs” to protect his daughter.

Other outlets like CBS News told readers: “Biden Brings the Laughs at Final Senate swearing-in,” while Politico at least described the 2017 encounters as “awkward.”

The outlet which broke the initial Biden accusation story, an op-ed penned by Flores, was New York Magazine. Back in 2017, however, that outlet felt compelled to post at least two different stories celebrating “Uncle Joe’s” behavior. “Full Biden on Display,” read the magazine’s “Intelligencer” blog, while “The Cut,” the very same blog that broke Flores’ story, lamented that the then-vice president was “running out of pickup lines.”

The liberal Talking Points Memo in 2013 essentially celebrated what they described as Biden’s “friskiest moments” from that year’s swearing-in ceremony, while The Week felt compelled to share his “wackiest one-liners.” The Hill even used one of the one-liners in its headline that year: “Biden jokes during swearing-in: ‘Spread your legs, you’re going to be frisked.’”

Perhaps worst of all was NBC News’ “Today Show,” which in 2013 posted a photo of Biden with his arms wrapped around The Hill’s Amie Parnes with the headline, “Photo of famously friendly Biden goes viral.”

Matt Lauer, who has since been fired from the network for sexual misconduct, defended Biden. “He’s a gregarious guy. It doesn’t seem all that inappropriate to me but I don’t know what the moment was,” Lauer said.

But few if any of these outlets are laughing now, as Biden weighs another run at the White House and accusers come forward. Still, the media will have to address how it enabled and celebrated what Yahoo! News in 2013 called “Peak Biden” for so many years.