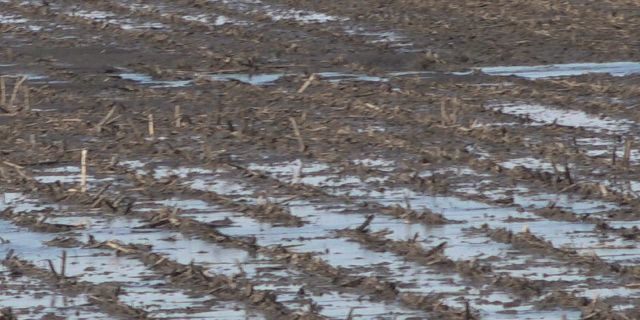 Dustin Sheldon, a fifth-generation grain and soybean farmer, watched in horror as the floods that devastated the Midwest began to recede and he could assess the damage to his crops.

He said the record-breaking floods caused about $1 million in losses for his family farm.

“We figured that there is roughly $7 million worth of grain sitting in these grain bins here just in our county alone that is either destroyed or inaccessible right now that we won’t even be able to get to or sell,” he said. “Financially,  there’s a lot of farmers that can’t come back from that and they may be out of business.”

An intense “bomb cycle” caused massive flooding in states like Nebraska, Iowa and Missouri, damaging homes and causing extensive damage to crops that feed the country. The pain is particularly felt among farmers whose livelihood depend on crop sales. Now that land is drying up, many are starting to assess how the damage will impact their bottom-lines.

Sheldon said that April marks a time when farmers should be fertilizing their lands to prepare for the upcoming crop season. But farmers now have to wait until the water recedes to see what they have left to survive on ahead of the 2019 farming season.

“Obviously right now, we’re a ways from being able to do that. Our 2019 crop is looking very discouraging — [and that’s] if we’ll even be able to get a crop in the ground,” said Sheldon.

Across the country, Nebraska, Iowa and Missouri governors have all declared a state of emergency in response to the historic floods.

While farmers have contingency plans in place, including insurance for crops on the ground, Sheldon said farmers will not receive aid or funding for the stored crops and livestock during the floods.

And flooded fields aren’t the only problem facing farmers. Collapsed roads and infrastructure will slow down efforts to repair infrastructure crucial to get the area back up and running.

“It can be two years before we see an income again,” Sheldon stated. “Our levy system is completely destroyed.  It’s going to be a rebuild and our core engineers department is telling us that it could take two years to do that.”

Ernie Goss, a professor of economics at Creighton University, said the damage caused by the floods is not limited to those in the agriculture sector.

Consumers nationwide could feel the impact too.

As for Sheldon, he is hoping that Congress can come to an agreement to pass a disaster relief bill so farmers can get back to their livelihood.

The most recent measure was struck down in the Senate.

“You know, if we have a disaster somewhere else it seems like the money comes immediately for disaster aid,” Sheldon said, “but there are people who are paying mortgages with 10 feet of water inside their houses while living somewhere else.”

UK judge to give ruling on November 2 in Johnny Depp...